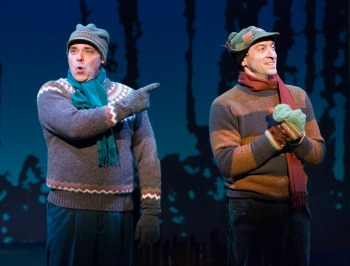 Personally, I feel Children’s Theatre is one of the most important things for kids to experience for so many different reasons, but mostly because it is a shared experience that teaches things like empathy and it fuels the imagination as well as teaches skills that are necessary to face the world we live in. Arden Children’s Theatre does theatre for kids, and it does it well. They create an environmental experience where children are encouraged to laugh and clap, and they can ask the actors questions after the show. A Year with Frog and Toad, under the direction of Whit McLaughlin, is a wonderful production, and children and adults alike will enjoy this story about the friendship of Frog and Toad.

If you are not familiar with the stories of Frog and Toad they are a series of children’s books from the 1970s that were written and illustrated by Arnold Lobel. Each book contains a series of adventures with Frog and Toad that chronicle the exploits of these two friends. The musical, first produced in 2002, was written by Robert and Willie Reale. This show takes the audience on adventures with Frog and Toad, and as the seasons change, so do the journeys Frog and Toad set out upon. The most important thing about this show is the message it delivers about friendship, and that through good and difficult times having a good friend is one of the most important things in life.

Playing the role of carefree Frog in A Year with Frog and Toad is Jeffrey Coon. Coon is charming in this role. Also, I adored his performance in 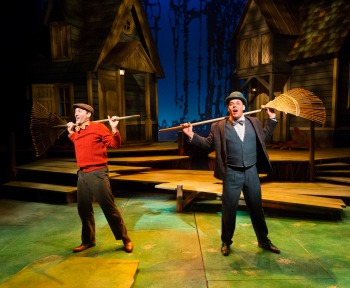 the song, “Alone.” Ben Dibble portrays Toad, a character who appears anxious much of the time. Dibble is delightfully fretful throughout the show, and his animated facial expressions through much of the show are priceless. In addition, he will have audiences laughing with the song, “Cookies.” One of the things that made this show work so well is the chemistry that Dibble and Coon have together. Audiences will see the interaction between these two fine actors that depicts a true friendship between Frog and Toad. There are three other actors in this show that play several characters and add to the silly moments throughout the production. Leigha Kato plays Mouse and she is wonderful as she scurries speedily across the stage. Elexis Morton portrays Turtle, and she is sassy as she brings out the edgy and confident personality of the turtle. Rounding out this cast is Steve Pacek who was incredible as the Snail. The Snail with the mail is always the highlight of the show because everyone cheers him on to deliver a letter. Pacek is sincere and inviting, and has strong vocals in the song “The Letter.”

I also need to mention the set designed by Donald Eastman. The set seems as if it jumps right off the storybook pages that I remember as a child, complete with the detailed houses of Frog and Toad. Richard St. Clair designed the costumes. Choreography is by Lee Ann Eztold. Thom Weaver is the Lighting Designer and Jorge Cousineau is the Sound Designer. In 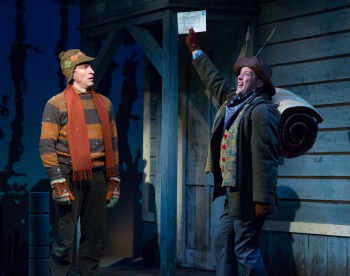 A Year with Frog and Toad runs at the Arden Theatre Company through January 29, 2017. For more information and tickets visit their website at www.ardentheatre.org or call the box office at 215-922-1122.

Final Thought: A Year with Frog and Toad is a delightful show for children and adults. The show has incredible performances, and will amuse audiences from start to finish. This show will remind audiences about the importance of friendship, and being a good friend to another, through good and bad times.