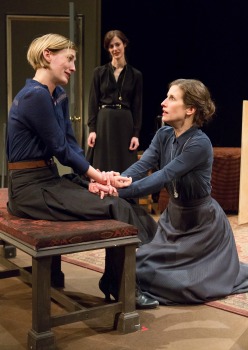 The Arden Theatre Company just opened the world premiere of a new translation of Three Sisters. Curt Columbus translates this play, originally written by Anton Chekhov. The Arden Theatre calls this new translation, “audacious, alive, and contemporary.” I would have to agree with this, Three Sisters is a contemporary retelling of Chekhov’s beloved play, but it also keeps with the tradition of Chekhov. The Arden’s production is bold and honest with a strong cast.

The production of Three Sisters at the Arden is a new translation by Curt Columbus, as well as supported by a grant from the Pew Center for Arts and Heritage. Three Sisters is about three sisters, Olga, Masha and Irina, whose father died a year before the play begins. The play is about these three strong characters trying to find satisfaction and happiness in their lives. Throughout the show there are themes such as love, loneliness, struggle, despair and hope. What makes the Arden production unique is this telling of the story begins as a play within a play – the first scene is actors doing a read through of Checkov’s Three Sisters. As the play progresses, so does the costumes and the sets. By the end of the show, there is a complete set and the audience is seeing the final act of Three Sisters. The Arden pushes boundaries with this production in the way the show progresses, but also the attention to detail put into the production. One of the remarkable things they do in the first act is to set the scene with an intricate diorama of the house where the sisters live. To help the actors engaged in the read-through of Three Sisters and the audience immerse themselves in the experience of the home the sisters reside, a man with a camera is filming the diorama that is projected on a large screen on the stage in order to set the scene. This gives the impression of walking room by room through an actual home and taking the audience on a tour of the estate. The ingenious use of digital media the Arden Theatre uses never cease to amaze me, and Three Sisters is no exception to this.

The cast for Three Sisters are strong and bring a passion to each of their characters. Playing the role of Olga, the oldest sister, is Sarah Sanford. 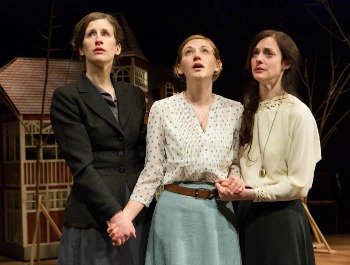 This character acts as a matriarchal figure throughout the show. Even in the beginning scene where the actors are doing a read through of the script, Sanford acts as the central figure who is directing the read through. Sanford brings a gentleness to her character as she plays the maternal figure. Katharine Powell plays the middle sister, Masha. Masha married her husband, Fyodor Kulygin, when she was eighteen and recently out of school.  Powell brings a complexity and strength to this role, as she plays the sister who will stand up to her sometimes out-of-control sister-in-law, Natasha. Mary Tuomanen portrays Irina, the youngest sister. Tuomanen is a fine actor, and she brings out the innocence of her character without making her seem naïve. The play belongs to these three sisters, and they shine throughout the production. There are a few other actors who deserve mentioning.  Rebecca Giebel plays the indelicate sister-in-law, Natasha, who definitely brought out the wicked nature of Natasha. Scott Greer as Dr. Ivan Chebutikin, a friend of the family, and Greer’s character adds humor to dark moments throughout the play. Luigi Sottile who portrays Andre Prozorov, the brother of Olga, Masha and Irina. Sottile brilliantly shows the decline of his character from his dreams of being a professor to his waning from gambling. The entire cast of Three Sisters is remarkable, and in addition to the above includes Philadelphia favorite actors: Jake Blouch, Sam Henderson, James Ijames, Daniel Ison, Louis Lippa, Ian Merrill Peakes, Cathy Simpson, and Charlie Thurston.

Under the direction of Terrence J. Nolen this production of Three Sisters is a show that is unique and spellbinding. In addition, the set design by Eugene Lee is a thing of beauty. I loved how the scenery changed throughout the show, working to draw the audience into the play, and as the play got more complicated, so did the scenery.

Three Sisters runs at the Arden Theatre through April 20, 2014. For more information and tickets, please call their box office at 215-922-1122 or visit their website at www.ardentheatre.org.

Final Thought: The Arden Theatre presents a bold and fresh interpretation of Checkov’s Three Sisters. The cast of this production is remarkable, and succeed a bringing a passion to each character.