The Arden Theatre Presents an Enchanting BEAUTY AND THE BEAST 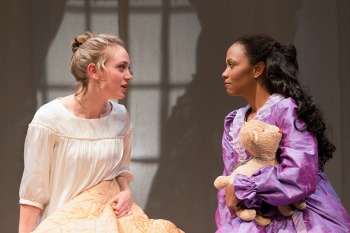 I have frequently attended the productions at the Arden Theatre in Philadelphia long before I even began writing reviews of theatre. I have seen many memorable shows there, but I have never seen a children’s production there; that is until now. Beauty and the Beast is the current production in the Arden’s Children’s Theatre series. Beauty and the Beast is thoughtful, creative, and brilliant. This is a show that not only children will be immersed in, but adults will love it too.

Before I launch into the great performances in Beauty and the Beast I want to write about why I loved this production so much.  The creativity that went into creating an environment where the audience experiences the show visually is stunning. The set, wonderfully designed by David P. Gordon, is a simplistic set, but helps the audience visualize the story, which takes place in London. Add to that the use of shadows to transform the stage into an ocean where there is a tremendous storm complete with ships capsizing and later these scenes transform into a city scene within 18th century London, and all this creates a visually stunning production. The Designer of Shadows and Shadow Objects is Sebastienne Mundheim and White Box Theatre.  Another aspect of the environment that I enjoyed about attending this Children’s Production is that before the show the children are encouraged to laugh and applaud when they see something they like in the show. Many young children reacted to the production I attended with enthusiasm and awe, and witnessing their reactions added to the experience of this production. I applaud everyone at the Arden for creating such an amazing show for children (and parents) to experience, because this production is a fine example of how wonderful and engaging live theatre can be for children and those of any age.

The Arden’s Beauty and the Beast, by Charles Way and directed by Whit MacLaughlin, is a retelling of the classic fairy tale. There are the

traditional characters of Belle and the Beast that many are familiar with, but part of the story is also about how Belle’s father, George Godwin lost his fortune at sea. Additionally, this story involves Belle’s sister Cassandra, who really wants nice things from life, a mysterious housekeeper at the Beast’s castle and Cassandra’s love interest, Daniel Knightly. All these various characters create an engaging play that children and adults will find themselves drawn into.

In the role of Belle is Emilie Krause. Krause portrays Belle’s innocence and infuses independence and determination into her character. The audience immediately likes Belle, she is a warm presence on stage. Matteo Scammell plays the Beast. Scammell instills the Beast with wolf-like traits through his poise, posture and mannerisms as well as his physical interactions with other characters. He is convincingly beastly without being frightening. Brian Anthony Wilson plays Belle and Cassandra’s father, George. Wilson plays a kind-hearted father who is always in search of the next adventure with compassion and grace. Lauren Hooper portrays Cassandra, Belle’s sister. Hooper gives this character a strong personality, and I enjoyed watching the dynamic between Krause and Hopper. Their interactions were perfectly “sisterly.” E. Ashley Izard portrays the housekeeper. Izard makes the housekeeper mysterious and haunting; I appreciated her appearances in the Beast’s castle. Rounding out this cast is Kevin Meehan, who plays Daniel, who is in love with Cassandra. Meehan is charming, and adds humor to the show. 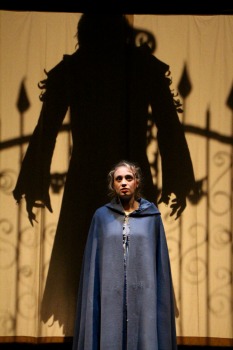 I also need to mention members of the Artistic Team that I did not previously mention. Richard St. Clair designed the wonderful costumes. Brian Sidney Bembridge is the Lighting Designer and Rob Kaplowitz is the Sound Designer. In addition, Sam Tower is the Assistant Director.

Beauty and the Beast runs at the Arden Theatre through February 1, 2015. For more information and tickets visit their website at www.ardentheatre.org or call the box office at 215-922-1122.

Final Thought: The Arden’s Beauty and the Beast is a riveting production. Everything from the set to the lighting design to the actors all work together to create an enchanting theatrical performance. This is one of the best children’s theatrical productions I have seen; I would highly recommend the show to children and adults.

Photo 1: Emilie Krause as Belle and Lauren Hooper as Cassandra in Arden Children’s Theater Production of Beauty and the Beast.  Photo by Mark Garvin.

Photo 2: Matteo Scammell as The Beast and Brian Anthony Wilson as George Godwin in Arden Children’s Theatre Production of Beauty and the Beast. Photo by JR Blackwell.