The Arden Theatre Presents an Intelligent and Witty Equivocation 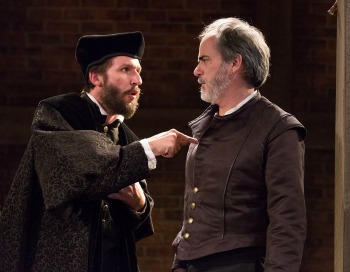 Equivocation at the Arden Theatre, under the direction of Terrence J. Nolen, is a beautifully crafted production with performances by a group of incredibly talented actors. It is a play that references a number of questions that scholars have long been debating about deciphering the politics of Shakespeare as well as playing with the notion as to whether Shakespeare actually wrote the works that bear his name.  What playwright, Bill Cain, does exceptionally well is creates a piece that cleverly works his knowledge of Shakespeare into the script, which I greatly appreciated. Equivocation at the Arden Theatre is a play that will enlighten audiences in regards to Shakespearean knowledge in a way that is entertaining, and this production is a bold endeavor.

Even though the plot of this play revolves around Shakespeare (referred to as Shagspeare in this play, one of his lesser known pseudonyms) it also is about having the courage to tell the truth in difficult times. The plot of Equivocation is this - Shagspeare is resisting a commission to write a play based on current events in 1605. He is being commanded to write a play based on the "Gun Powder Plot." For those not familiar with the "Gun Powder Plot," it is a plot in which a group of individuals attempted to blowup Parliament. Equivocation is a blend of humor, mystery, Shakespearean knowledge and even a story line regarding a father-daughter relationship.

Equivocation is a wonderfully staged production, and the performances in the show are incredibly well-done. However, there were times within the 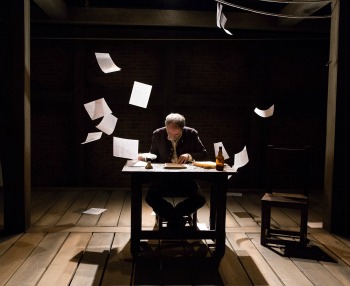 show when I felt a bit bogged down with information, especially in act one by the sheer amount of history and Shakespearean anecdotes that were being revealed to the audience. Cain's intelligence and knowledge of Shakespeare strongly comes across, but there are moments in which I became completely overwhelmed by his scholarly wit. All this being said, I felt this cast, under the direction of Nolen, took this complicated and dense script and made it more tangible for audiences.

Playing the roles of Shagspeare is Eric Hissom. What I loved about Hissom's performance is that he created the impression of a multifaceted writer. There were moments he came across as serious and focused and other moments where he brought out the dreamer and passionate writer side of his character. Additionally, some of the standout scenes are between Hissom and Campbell O'Hare, who plays Judith, Shags daughter. These two have great chemistry onstage, and their complicated and loving relationship comes across. O'Hare plays a complex and strong willed character, with strong opinions. I thought one of her best scenes is one in which she denigrates Shag's use of soliloquies in his plays with, what else, a soliloquy. Four of the cast members play multiple roles, Ian Merrill Peakes, Dan Hodge, Sean Lally and Anthony Lawton. Each of these talented actors glide from one role to another with precision and ease. Ian Merrill Peakes plays Richard, one of the members of the Globe Theatre’s acting company and Henry Garnet, a Jesuit priest. I was thrilled to see him reprise his role of Macbeth for a brief moment in the play. There is a solemnness and kindness that Peakes brings to the stage as Henry Garnet, and he is a strong presence onstage. Dan Hodge 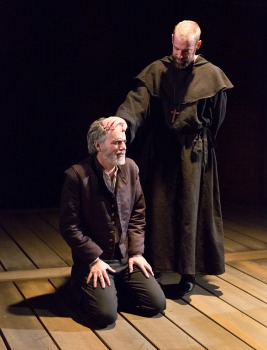 portrays Nate, another member of the acting company and Sir Robert Cecil, who was the senior statesman under King James I. Hodge is animated each time he takes the stage, and he brings the complexity of Cecil to breathe life into this multifarious character. There were times I abhorred his character and moments I was sympathetic towards him. Sean Lally plays Sharpe another member of the acting company, Tom Wintour, a conspirator in the Gun Powder Plot and King James I. Lally is zealous throughout the show, but the excitement that exudes from Lally in the scenes where King James is watching the witches is like seeing the thrill of a child on Christmas morning. Rounding out this cast is Anthony Lawton who plays Armin, an actor, Robert Catesby, the leader of the group who planned the Gun Powder Plot and Sir Edward Coke, an English politician. Lawton is boisterous onstage and adds humor to his scenes.

I found that Equivocation does enlighten the audience in regards to Shakespearean lore and history. Theatregoers will leave the Arden Theatre with knowledge about Shakespeare they had not previously known, and it may even inspire them to further educate themselves on a few anecdotes about Shakespeare after seeing the Arden’s production.

Equivocation runs at the Arden Theatre through December 13, 2015. For more information and tickets visit their website at www.ardentheatre.org or call the box office at 215-922-1122. Just a note, this production contains nudity and adult themes, therefore it may not be suitable for young children.

Final Thought: Equivocation at the Arden Theatre is a wonderfully staged production with solid performances. This show brings the playwright’s 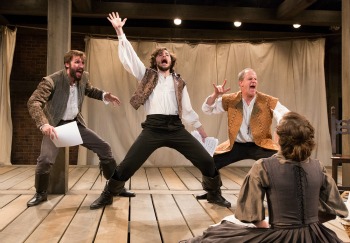 dedication and appreciation of Shakespeare to the stage, and gives the audience a witty, entertaining and thought provoking production.