The Arden Theatre Presents an Entertaining and Engaging FUNNYMAN 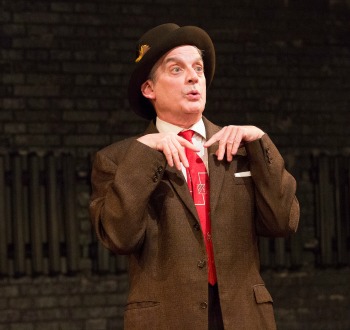 Bruce Graham is a well-known Philadelphia playwright whose works have been seen throughout the area at theatres such as Act II Playhouse, People’s Light, Philadelphia Theatre Company and the Arden. His newest play at the Arden, Funnyman, is the third play of Graham’s I have seen during the past year. In seeing Graham’s work I have come to expect seeing plays that are brimming with comedic moments as well as exploring hard hitting emotional themes. His writing keeps the audience invested in the story and the characters. That is exactly what comes from the Arden’s production of Funnyman. This show, under the direction of Matt Pfeiffer, has moments of humor and moments of hardship, and it is a show that will keeps audiences engaged until the end of the production.

Funnyman is a rolling world premiere in conjunction with Northlight Theatre in Illinois. Graham has expressed in previous interviews and also as it is noted in the program, that the inspiration for this play and in particular the character, Chick Sherman, in part is derived from the life story of Bert Lahr. The inspiration for this play is from Notes on a Cowardly Lion a biography by John Lahr about his father Bert Lahr, the iconic performer and comedian. The story of Funnyman follows the story of Chick Sherman (Carl N. Wallnau), a man who had a successful career in vaudeville, but by 1959 his career is fading. His manager, Milt (Kenny Morris) tries to convince him to reinvent himself and take a role in an off-Broadway play. In addition to Chick trying to make decisions about his career, his daughter, Katherine (Emilie Krause), is back in his life, and these two have a strained relationship. Funnyman looks at how one man needs to reinvent himself as well as learn how to be honest and forthright with his daughter about family secrets that he has kept hidden for too long.

Carl N. Wallnau as Chick is strong throughout the show from the scenes in which he performs as a comic to the scenes with his daughter that 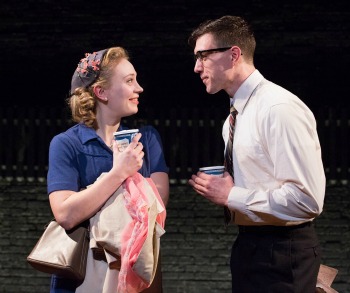 are full of tension and emotion. Wallnau glides easy between the comic scenes to scenes that present his character’s true sullen nature. Another strong point about Wallnau’s performance is that he seems deeply contemplative in his scenes, which demonstrate that Chick is not happy in life even though his success came from making others laugh.  Chick’s manager and friend, Milt is played by Kenny Morris. Milt is a character in the show who embraces and tries to enjoy life even with the hardships he has experienced. Morris brings a warmness to this character, and the scenes with Wallnau are exceptional as Morris gives a genuine performance and appears to truly understand Chick on a deeper level. Chick’s daughter, Katherine, is played by Emilie Krause. Krause gives her character a depth as initially she seems angry towards her father for not being truthful with her, while underneath it all she is lost and trying to find a way to connect with her father.  There is an emotional and heated scene at the end of act one between Krause and Wallnau, and this scene is brilliantly portrayed. Playing Nathan, Katherine’s co-worker who she becomes involved with, is Brian Cowden. Cowden gives an enthusiastic performance as someone who has a thirst for life, and the scenes between Cowden and Krause are spirited. Charlie DelMarcelle portrays Matthew Baroni, the director of the off-Broadway play that Chick is to star in. DelMarcelle gives an intense performance as an artistic vision driven director. Rounding out this cast is Keith Conallen who plays the playwright, Victor La Plant. Conallen is animated and vibrant, and when he appears on stage, he steals the scenes he is in. 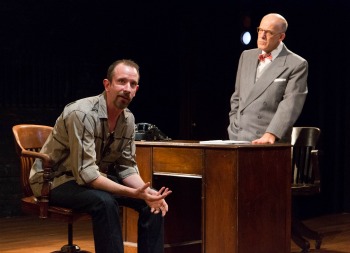 Funnyman runs at the Arden Theatre through March 16, 2016. For more information and tickets visit their website at www.ardentheatre.org or call the box office at 215-922-1122.

Final Thought: Funnyman at the Arden Theatre is a show that is about the later years of a successful comic’s life, and though he presents a funny face to the world underneath it all there is an ache in his soul. This show engages the audience as it reveals the story of Chick Sherman and explores how he must learn to reinvent himself as well as bare his soul to those closest to him in order to gain solace. It provides for an evening of moving theatre that will make audiences consider how the choices we make and how we choose to emotionally deal with them can ultimately define who we are and how we experience life.