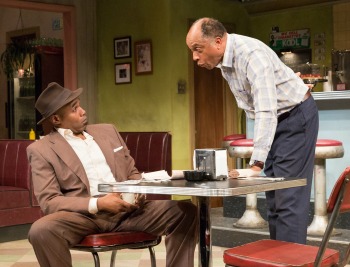 August Wilson’s Two Trains Running is the current show at the Arden Theatre Company. This production embraces the power of Wilson’s writing, and creates a show that is moving and complex. As I sat in the audience earlier this week I was struck not only by Wilson’s words and the strong performances, but by the relevance this play has today, even though it takes place in 1969.  This play presents an emotionally moving look at the lives of seven individuals and the way in which their lives intersect. These individuals are simply trying to live their life and find some level of contentment while the world around them seems to keep this just out of their reach.

Two Trains Running premiered at Yale Repertory Theatre in 1990, and opened on Broadway in 1992. This play is seventh in the ten-part Pittsburgh Cycle. Nine plays in this series of plays take part in the Hill District of Pittsburgh, which is primarily an African-American neighborhood. Each of the plays are set in a different decade in the twentieth century. Two Trains Running takes place in 1969. The characters in this play frequent a diner owned by Memphis, where they gather to share news, tell stories, gossip and socialize. Director, Raelle Myrick-Hodges, writes in the Director’s Notes, “Though set in 1969, its commentary and narrative tale are simultaneously enlightening, disconcerting and still prevalent in today’s society . . . .  From the civil rights movement of the 1960s to the #BLACKLIVESMATTER movement of today, I am here to serve a story which is supposedly familiar yet not well heard.”  Myric-Hodges does exactly that, she connects the stories of the 1960s and today, which is a powerful reminder that the struggles of the 60s and today are still intertwined.

Even though this play is one of a number of plays in a series, you do not need to have seen any other play from the series to understand and 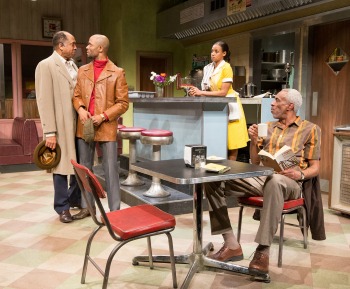 enjoy this one. Two Trains Running is one of the more powerful plays I have encountered this year, and everyone involved with this production does an exceptional job with this show. In the role of Memphis, the man who owns the diner that is about to be condemned due to urban renewal is Johnnie Hobbs Jr.  Hobbs is outstanding in this role as he plays the character who anchors this play, in addition he brings out the honesty and diligence of Memphis. He is a pleasure to watch as he depicts Memphis’s determination that he will force the city to give him the price he expects for his diner.  Darian Dauchan plays Wolf, the fast talking numbers runner and a regular at the diner. Dauchan is animated in this role as he tells stories about the women he is dating. Risa, a young waitress and cook is portrayed by Lakisha May. Risa is a complex character who is said to be so suspicious of masculine attention that she has scarred her own legs. May perfectly brings a sincerity as well as defensiveness to her character. In addition, there is a quiet kindness that May depicts in this character, especially during her scenes with Hambone, which emphasize the complexity of Risa.  Damian J. Wallace plays Holloway, a percipient older man who provides words of wisdom throughout the show. Wallace gives a superb performance, and he skillfully portrays how his character believes he is justified in giving advice due to his experience with the world and the pain he has endured. U.R. plays Sterling, a man who just got out of jail and who is trying to make his way in the world. U.R. gives Sterling an air of confidence and simplicity in his bracing performance. Kash Goins plays Hambone, a feeble-minded character who feels he was wronged by the butcher who promised him a ham nine and a half years ago for painting his fence. Goins gives a determination to this character as well as shades of fragility. Rounding out this cast is E. Roger Mitchell who plays West, a prosperous funeral director. Mitchell is commanding in this role as he depicts how West’s financial success overshadows his good judgement and emotional loss.

Everything about Two Trains Running is on the mark from the set (designed by David P. Gordon) to the costumes (designed by Alison Roberts) to the use of digital media (by Nicholas Hussong). The thing that really made this show excel was the way that the actors embody the characters, which made them captivating as both individuals and as an ensemble. They capably filled the stage with emotion and bring to light the complex nature of their characters, which made watching the show a remarkable experience.

Two Trains Running is at the Arden Theatre through April 10, 2016. For more information and tickets visit their website at www.ardentheatre.org or call the box office at 215-922-1122.

Final Thought: Two Trains Running is a remarkable and moving show as it portrays the lives of seven people and how their lives intersect. This show is a reminder of the power of August Wilson’s words and this cast is outstanding.