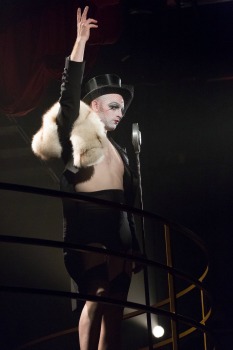 The Arden Theatre Company opens its 30th season with an edgy production of Cabaret. This production of Cabaret knocks it out of the park. Everything about this show is memorable from the performances to the sets. A few things set this production apart from other productions of this show that I have seen previously. First, the Arden designed this show to be a bit more immersive in the way that the Emcee is positioned throughout the theatre. He, and many of the actors in the show, break the fourth wall and interact frequently with members of the audience. In addition, Director, Matthew Decker, took this show and provided a bit of a mirror of our current society to help drive home the point that we need to learn from history and not repeat the past. Instead of ignoring how distressed we all feel because of the current political climate, he worked the turmoil we as a country are feeling into the show. This is a show that was a true reminder why live theatre is important. Cabaret is a show that makes audiences feel uncomfortable in a thought provoking way and one that pushes boundaries. Furthermore, the Arden Theatre’s production of Cabaret is exquisite. If you think you have seen Cabaret before you have not seen it like this. It affects audiences in a way that is unanticipated and it really sparks a discussion.

Cabaret is based on the 1951 play by John Van Druten, I am a Camera, and the stories by Christopher Isherwood. Joe Masteroff wrote the book for the musical with the music by John Kander and the lyrics by Fred Ebb. It is 1931 in Berlin, and it is a scene of corruption and debauchery. The musical Cabaret revolves around the seedy Kit-Kat Club, and the story takes place in Berlin as the Nazis are rising to power. There are many players in this musical and Cabaret looks at their individual stories at this poignant moment in history. The show is unexpected, and although this show has wonderful and familiar music, this production at the Arden Theatre Company is fresh and important.

Director, Matthew Decker, has put together a production with themes that are still relevant today in our modern chaotic world. What was 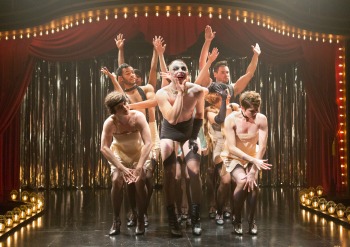 remarkable to me is this idea that this musical had its premiere in 1966, and the themes in the current production at the Arden still come across as relevant today and the whole production comes across as fresh and new. In the role of the Emcee is John Jarboe. Jarboe’s performance is haunting and mysterious. He evolves the character of the Emcee to a place where he is just going through the motions, but is so disturbed by what is happening in Berlin that he loses his luster for life slowly throughout the musical. His performance in the song “Money” is energetic and he is full of pizazz. Charissa Hogeland plays Sally Bowles, an English lounge singer who is tormented and tries to choose the right path in life. Hogeland brings a likableness to her character. She makes this character her own by bringing a softer sincerity and anguish to Sally. Hogeland also has powerful vocals in the song “Maybe This Time.” Daniel Fredrick portrays the charming and erudite American writer, Clifford Bradshaw. Fredrick’s performances is humanizing as he gives Clifford depth and brings out his aspirations as well as shortcomings. In addition, Fredrick and Hogeland have great chemistry onstage. Their relationship unravels onstage and brings a more humanizing aspect to these characters. Christopher Patrick Mullen plays Ernst Ludwig, a character who outwardly tries to be everyone’s “buddy”, but is secretly scheming and hiding his ulterior motives. Mullen’s performance is powerful as he begins the show as just an affable character and then evolves into a character indicative of evil and hate. Mary Elizabeth Scallen portrays Fräulein Schneider, a German woman who owns a rooming house and has been hardened by life and does what is necessary to survive. Kenny Morris plays Herr Schultz, a likable German man who is making the most of what life has given him. Scallen and Morris have great chemistry onstage and they celebrate life and happiness in the song “Married.” Lastly, Suli Holum’s performance as Fräulein Kost needs mentioning as she adds levity to the show. Also she gives a memorable performance as her character makes accommodations to conform to the changing society around her during the show. 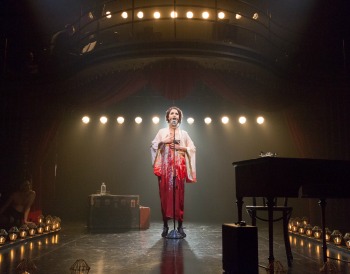 I also need to mention the Scenic Design by David P. Gordon. The set looks simple and elegant, and the use of a musicians balcony overlooking the stage and various doors made this specific set stand out. Olivera Gajic designed the period appropriate costumes including Sally’s dazzling gowns. Maria Shaplin is the Lighting Designer and Jorge Cousineau is the Sound Designer. Jenn Rose is the Choreographer. In addition, Alex Bechtel serves as the Music Director.

Cabaret runs at the Arden Theatre Company through October 22, 2017. For more information and tickets visit their website at www.ardentheatre.org or call the box office at 215-922-1122.

Final Thought: Cabaret at the Arden Theatre is bold and daring, and the performances are incredible. Through outstanding direction and a spectacular cast the audience is drawn into this heart-wrenching story and reminded of the power of the show.