“Jellicle cats come out tonight . . . Jellicles come to the Jellicle Ball.” This is the premise for the current show at the Dutch Apple Dinner Theatre, Cats. The show is based on T.S. Eliot’s collection of poems entitled, Old Possum's Book of Practical Cats, and Andrew Lloyd Webber composed the musical. The show tells the story of a group of cats called “jellicles,” and they come out once a year to the Jellicle Ball.  At the ball, the jellicle cats decide which cat will ascend to the “Heavenside Layer” and come back in a new life. Dutch Apple Dinner Theatre’s production of Cats provides an enjoyable night of entertainment. 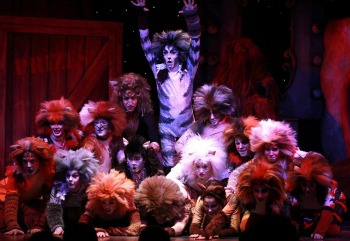 The set for this production of Cats is stunning. The Dutch Apple’s version takes place in an abandoned amusement park instead of a junk yard. Personally, I enjoyed the setting of the amusement park much more than the junk yard. The set has a fun house, a carousel, and a ticket both, all which show signs of deterioration. The details in the set are amazing. The carousel horse that is part of the set is beautiful. The scenic designer for Cats is Christine Peters, and she needs applauded for this amazing set.

Cats is a show that is entirely sung, and the show is full of beautiful songs and dancing. One of the best numbers in the show is “Skimbleshanks.” The choreography in this song is wonderful, and Jimmy Robertson who plays Skimbleshanks is full of energy. André Dion Wills plays Old Deuteronomy and his voice is strong and one of the best in the show. Annie Freres is lovely as Grizabella, and her rendition of “Memory” is emotional and will not disappoint.  One of the best dance numbers in the show is “The Old Gumbie Cat.” Donovan Hoffer as Munkustrap and Emily Grace Tucker as Jennyanydots make strong impressions with the singing and dancing. Finally, the song “Mr. Mistoffelees” is magnificent and will have audience members tapping their feet along with this song. The cast of the Dutch Apple’s Cats is strong, and if full of dazzling dancing, and sensational singing. 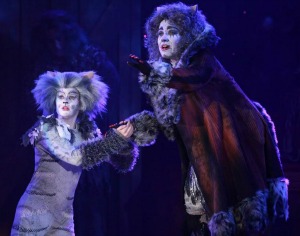 Amy Marie McCleary is the director and choreographer of Cats. Part of McCleary’s task for this show is showing the actors how to act like actual cats, and the actors are successful in convincing the audience that they are cats. McCleary deserves praise for her excellent direction and choreography for this production.  John P. White also merits praise for his fine costume design, as does Russell A. Thompson for his lighting design. Finally, A. Scott Williams is the musical director and skillfully leads the orchestra.

Ummm, have you seen Cats before?? I was debating how to give the theatre some constructive criticism, but then I read this review and was confused. I love the Dutch Apple and will continue to go there, but I thnk they missed the mark on this one. I have seen Cats over a dozen times everywhere from London to Cumberland Valley High School and I think the hardest part for me was that the high school production was better. I have to blame more of the production and direction side. The actors were talented, but I have to disagree with Deuteronomy. He is by far the worst one I have ever seen. But so many things were just off in this production. It is still a good time and people should still go and enjoy it, but the directors and producers I think missed an opportunity especially with some great talent to work with. I know it's a big production to take on, but there were so many little things that would have made a big difference. I am just surprised by this rave review. So I had to comment.