Swing with THE BANDSTAND at Paper Mill Playhouse 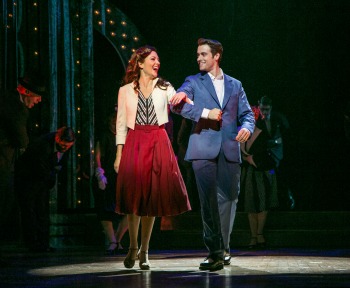 Paper Mill Playhouse’s The Bandstand is one of the best shows I have experienced at this theatre, and it is a great tribute to the troops. What this show does really well is address a significant topic that is often over looked, how soldiers adjusted back into society when returning home after World War II, and it is done through the telling of a story about World War II veterans forming a band in order to compete in a national radio contest that guarantees the winning band a feature in a film. The Bandstand is dynamic, fervent and incredibly well done. If you have a chance to see this show, I would highly recommend getting tickets before the end of the run of this production.

Under the direction and choreography of Tony Award Winner, Andy Blankenbuehle, The Bandstand is chill-inducing, with incredible musical numbers and a stellar cast.  This musical features a book and lyrics by Richard Oberacker and Robert Taylor and music by Richard Oberacker. The Bandstand follows the story of Donny Novitski, who is a WWII vet and dreams of a better life. He forms a band made up of other WWII veterans, with the intent of winning a national radio contest with finals in New York City and the opportunity to be featured in a movie. This musical is set in 1945, and the music is influenced by the swing music of the 1940s, and a good deal of the music is actually played onstage by the characters that make up the band. What made this musical profound for me is how it addresses the way in which these soldiers adjusted to life after the War, and how they coped with the images that haunted them from fighting in the War. There are musical numbers that are chill-inducing and powerful, and there are also musical numbers that are fun and full of energy and amazing choreography.

The Bandstand has an amazing cast, and each actor is perfectly fitted to their roles. Playing the role of Donny Novitski is Corey Cott. When Cott 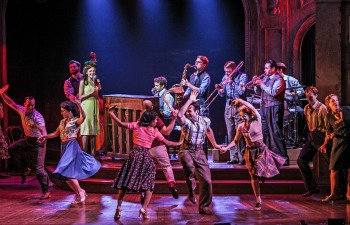 initially appears onstage he immediately comes across as charming, and as this character evolves Cott gives Donny a great deal of depth. He brings out this man’s struggle and torment, as well as provides incredible vocals and gives an outstanding performance. Donny forms a band of World War II vets because he wants to enter a radio contest, and show the world what a group of talented G.I. musicians can do. The group of actors who make up this band are incredible, and watching them play their own instruments onstage added to the distinctiveness of this show. The actors who portrayed members of the band are: Joe Carroll, Brandon J. Ellis, James Nathan Hopkins, Geoff Packard and Joey Pero. I found the act one finale, “Right This Way,” to be extremely well done and it was a chill inducing number. In addition, this group of fine actors seamlessly bring to light how each of these men suffered, and how they in turn dealt with their haunting memories from the war. There is an incredibly well done number that uses brilliant choreography to demonstrate how these men use various means, such as alcohol, drugs, music, anger or sleep avoidance, to try to tame their personal demons. It is a perfect and moving number. 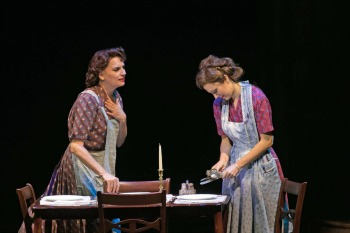 The elegant Laura Osnes plays Julia Trojan, a war widow, who is dealing with the loss of her husband, Michael. Once she meets Donny, he discovers that she has an incredible voice, and he wants her to be in the band as the featured vocalist. Osnes is perfectly cast in this role, as her kind-heartedness and emotional warmth come through and audiences feel empathy towards her as Julia’s hope and pain comes through in this show. In addition to Osnes’s phenomenal performance, her vocals are amazing throughout the show In particular, the last song of the show that features Osnes, Cott and the band, “Welcome Home” is incredibly powerful, and it left me haunted – it is one of those musical numbers that will impress audiences and leave them with a chill every time they recall the song.  Rounding out this cast is Beth Leavel, who plays Mrs. Adams, Julia’s mother. Leavel adds bits of sarcasm and humor throughout the show, and her song, “Everything Happens” is full of sincerity.

The Bandstand is a bold musical. It refuses to shy away from its important subject matter about what happens to veterans when they return 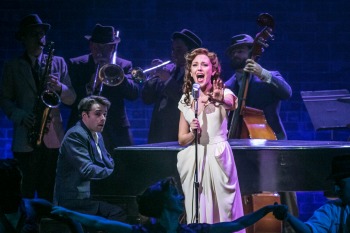 home after war. It asks the question, how do these fine men deal with the things they saw and the situations they dealt with? I applaud this show from not shying away from this topic, and creating musical numbers, which may be some of the most powerful and important musical numbers I have seen onstage. The Bandstand is a grand tribute to the troops, complete with musical numbers that are reminiscent of the 1940s, while still being fresh and innovative.

The Bandstand runs at Paper Mill Playhouse through November 8, 2015. For more information and tickets visit their website at www.papermill.org or call the box office at 973-376-4343.

Final Thought: The Bandstand at Paper Mill Playhouse is bold, zealous and incredibly well done. It celebrates the music of the 1940s and incorporates a moving story about World War II veterans and their struggles after the war. The show is a production full of powerful numbers and is emotionally moving while paying tribute to our country’s military and their sacrifices.