St. Joseph’s Prep Presents a Stunning PETER AND THE STARCATCHER 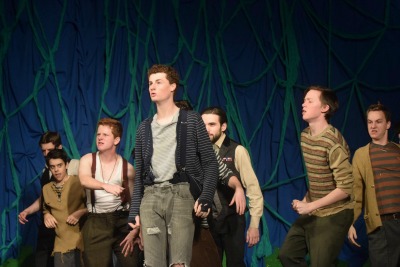 Peter and the Starcatcher is a prequel to J.M. Barrie’s treasured Peter Pan series. The play was adapted for the stage by Rick Elice. The play originally premiered at the La Jolla playhouse in California, and opened Off-Broadway in 2011 and transferred to Broadway in 2012. The story of the play follows a young orphan simply called “boy,” and how he becomes Peter Pan. This play has comrades and pirates and unlikely heroes who all are in search of the Queen’s treasure. There are a collection of characters in the play who range from earnest to deceitful. However, there is something charming and genuine about each of the characters that make this show a delight to experience.

Before I begin with individual performances I wanted to reiterate how this production is incredibly well done. Each year I feel the Cape and Sword 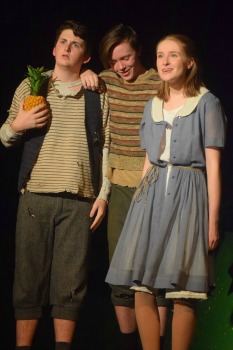 productions become more ambitious, and in this particular show I was drawn to the attention to detail that went into the sets and the special effects. In addition, the performances throughout the show were strong and full of energy. Playing the role of Boy/Peter is Liam Scott. Scott brings out Peter’s innocence and curiosity in this character. In addition, he and Claire Montgomery, who plays Molly, work really well together onstage. Molly is a noble young girl who is an apprentice Starcatcher.  Montgomery is sincere and breathes a lot of life into Molly, and she brings a strong sense of determination to this character. Mac Riga provides an especially energetic and humorous performance as Black Stache, the captain of the pirate ship who is the melodramatic villain of the story.  Riga delivers an amazing and hilarious performance while playing this villain. Playing Black Stache’s sidekick, Smee, is Paul Koenig. There are moments when Koenig steals the show with his exceptionally animated performance. He is outstanding from the moment he enters the stage and his momentum continues throughout the show. Koenig and Riga work well together to keep the plot moving along and keep the audience laughing. Jay Fogarty portrays Bill Slank, the greedy and harsh captain of the “Neverland.” Fogarty is phenomenal as this tough and smarmy captain. Matt Phillips plays Lord Leonard Aster, Molly’s father and a seasoned Starcatcher who is on a secret mission from Queen Victoria. Phillips is dignified and properly “British” in moments of the show when he is showing his loyalty to the Queen and he is emotional and loving as the father of Molly. Joe Scott is hilarious as Mrs. Bumbrake, Molly’s nanny. Scott is animated and keeps the audience laughing in this role. The scenes between Scott and John Fioravanti who plays Alf, a sailor, are especially funny. These two work well together onstage in this comedy pairing. Playing Peter’s two fellow orphans are Prentiss and Ted played by David McCabe and Jack Thorell. Both these fine actors add emotion and a great deal of humor to the scenes with Scott who plays Peter. Simon Williams plays Fighting Prawn, the chief of the Mollusk Islanders. Williams has a strong and commanding presence as the leader of this group. Lastly, I need to mention the following individuals: Steve Dierkes, Sam Halfpenny, Brian Jones, Jason Mattera, Joe Matthews, Liam McGrath, Jacob Orbell and Paul Christian Stowell. This group plays a variety of roles ranging from sailors to islanders to pirates and many other creatures, and they did an outstanding job throughout the show. 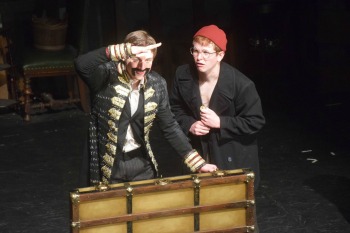 Peter and the Starcatcher, under the incredible direction of Tony Braithwaite, is a fast paced and enchanting story. There are two scenes in particular that stood out to me the day I saw this show. First is the opening prologue where the cast addresses the audience to tell us what is in store and they invite the audience to use their imagination throughout the show. This part of the show was flawless as the cast delivers their lines perfectly and it flowed almost like poetry. The second scene that stands out for me is towards the end of act one when Slank and Stache are fighting in what seems like a boxing ring. This scene turns into a brilliantly done rap battle, which gives the impression of a mashup from a scene from the Broadway musicals Hamilton and Something Rotten. I have seen this show performed in the past, although I have never seen this scene as creatively done as I did this past weekend.

Director Tony Braithwaite’s passion for Peter and the Starcatcher, theatrical knowledge, enthusiasm for theatre and his special ability to teach people through Art is all evident in this show. I have seen many productions Braithwaite has been involved with at Saint Joseph’s Prep and other theatres throughout the Philadelphia area, and it amazes me at the particular skill he has to infuse a show with his enthusiasm and talent. Peter and the Starcatcher is a show that Braithwaite and the entire cast and crew should be very proud of because it is incredibly well done and a delight to experience. 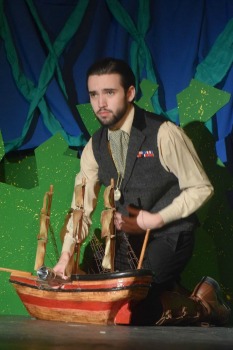 between. It takes a village to make a show this big, energetic and successful; the work everyone did to make this show a triumph is evident.The complex set design is by Joe Binck, and it was built by the Stage Crew, headed up by Andrew Devany, Jimmy Hegarty and Michael Principato. Sonny Leo is the music director and accompanist. The amazing costumes from Black Stache’s coat to the gigantic mermaid tail were designed by Jen Lancaster. The stage and lighting manager is Daniel Avington. Lastly, Andrew Imredy serves as the sound manager and percussionist. In addition, Braithwaite is assisted by Howie Brown, Kevin Ryan and Andrew Staub.

Peter and the Starcatcher runs at St. Joseph’s Prep through November 20, 2016.  For more information, please visit their website at www.sjprep.org.

Final Thought: The Cape and Sword Drama Society’s production of Peter and the Starcatcher is imaginative with a strong and energetic cast. This show is humorous and enchanting as the entire cast invites the audience to open their minds an engage their imagination as they tell the story of a Boy and his friend, Molly, and the adventures, people and creatures they encounter along their fantastical journey.