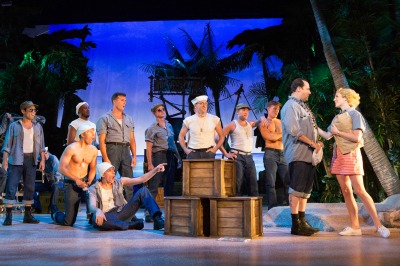 South Pacific is one of those musicals that almost everyone has seen, and if they have not, they most certainly know some of the music from the show. Songs such as “Younger Than Springtime,” “Some Enchanted Evening” and “Wonderful Guy” are all from South Pacific. Walnut Street Theatre opens their 208th season with Rogers and Hammerstein’s South Pacific, and this production is enchanting with a remarkable cast.

South Pacific is based on the 1947 Pulitzer Prize winning book by James A. Michener, Tales of the South Pacific. South Pacific focuses on two of the stories from Michener’s book, “Fo Dolla” and “Our Heroine.” The stories are inspired by Michener’s experiences and observations while stationed as a lieutenant commander in the US Navy on the island of Espiritu Santo during World War II.  Rogers and Hammerstein were inspired by this book, and wrote the score for this show.  This current production of South Pacific directed by Charles Abbott provides a vivid portrait of life during a time of war.

The show includes a talented cast that keeps the audience entertained throughout the musical. Kate Fahrner plays Nellie Forbush, an innocent woman from Arkansas who has a particular zest for life. Her songs “I’m Gonna Wash That Man Right Outa My Hair,” ”Wonderful Guy” and “Honey Bun” are full of energy and merriment. In addition, Fahrner’s performance is one of the best I have seen in this role as she makes Nellie a likable character. Paul Schoeffler portrays the enchanting French planter, Emile de Becque. Schoeffler charms the audience with his songs “Some Enchanted Evening” and “This Nearly Was Mine,” and both these numbers will give the audience chills. His vocals are packed with passion and emotion, and there is an air of sophistication about him every time he appears onstage. Lori Tan Chin plays Bloody Mary, an industrious island native who is desperately trying to marry off her daughter to a young American. There is a desperation and craftiness that Chin provides in her portrayal of the Bloody Mary character. Also, her vocals in “Bali Ha’i” are full of passion. Playing Lt. Joseph Cable, a young officer with a Princeton education, is Ben Michael. One of the issues that South Pacific presents to the audience is the racial tension during World War II. This production brilliantly captures the racial tensions during this time. The song that focuses on the unease regarding racial relationships is “You’ve Got to be Carefully Taught.” Michael performs this song, and infuses frustration and anger into the number, and it provides for a powerful moment in the show. Alison T. Chi portrays Liat, Bloody Mary’s daughter who falls in love with Lt. Cable. Chi is perfectly innocent in this role, and I especially loved her performance in “Happy Talk.” Fran Prisco plays Luther Billis, a sailor who is always trying to make an extra buck. I loved Prisco in this role, he is zany, and offers comic relief throughout the show. Prisco is a riot in “Honey Bun.” Dan Olmstead and Jeffrey Coon play the commanding officers Captain George Brackett and Cmdr. William Harbison respectively, they provide a stern but likeable interpretation of these characters, which provides for added humor in their response to the antics of the group of men they are leading. The entire cast of South Pacific is fantastic, and they all bring a passion and liveliness to the show.

There is a group of people who seem overlooked in reviews, and I would be remiss if I did not mention them in this review. The group I am referring to are the members of the ensemble. They are a group of people who play a bevy of roles throughout the show, and always add a ton of energy and zeal to the show. They provide wonderful and enthusiastic performances in such numbers as “Bloody Mary,” “I’m Gonna Wash That Man Right Outa My Hair,” and “The Thanksgiving Follies.” The members of the ensemble in South Pacific are: Joey Abramowicz, Ben Dibble, Jennie Eisenhower, Maria Konstantinidis, Owen Pelesh, Shavey Brown, Schyler Conaway, Casey Elizabeth Gill, Jessica Gruver, Kathryn Miller, Joseph Michael O’Brien, Chris Stevens, Christopher Shin and Sean Thompson.

The creative team for this production of South Pacific also need mentioning. Robert Andrew Kovach designed the beautiful set. Mary Folino designed the amazing costumes. Paul Black is the Lighting Designer and Ryan Peavy is the Sound Designer. The incredible choreography is by Michelle Gaudette. John Daniels serves as the Music and Vocal Director.

Final Thought: South Pacific provides a portrait of life on two islands in the South Pacific during World War II. The cast of the show is strong, energetic and give incredible performances. This production is enchanting and powerful, and any fan of Rogers and Hammerstein or classic musicals will not want to miss this production.