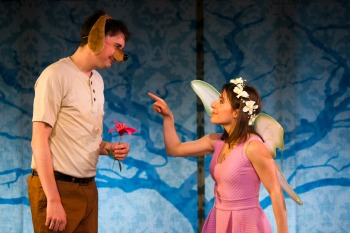 This past weekend, Act II Playhouse opened a new play for children, Sleeping Handsome. This play is a new story with a twist on the classic fairy tale, Sleeping Beauty. This was my first time attending one of Act II’s productions for kids, and I was delighted by not only the quality of the play, but also the originality of the story. Sleeping Handsome is interactive and energetic, and children will be captivated by this enchanting play as this fantastical tale comes to life on stage.

Sleeping Handsome is an original play created by Bill D’Agostino. The story is original and creative, and even adults will enjoy the show along with the kids. Sleeping Handsome is a story about a Queen who has banished all magic from the Kingdom in order to protect her son, Prince Conner. However, there is an evil fairy who is trying to work against the Queen and he tricks a young girl, Dawn, into helping him place Prince Conner into a magical sleep. She uses the assistance of her dog, Fletcher, and the audience try to break the magical spell. It is an imaginative show full of fun and whimsy, and will be enjoyed by children and adults alike.

Director Tony Braithwaite along with the two person cast provide a fast moving production that keep the audience engaged from beginning to end.  Eileen Cella and Andy Shaw play a variety of characters throughout the production. What I truly loved about their performances is how they seamlessly glide from one character to another. The day I attended the performance the children in attendance seemed to be enthralled with the story and enjoyed seeing how the voices and costumes changed from one character to another. Cella is remarkable in how she transitions from a 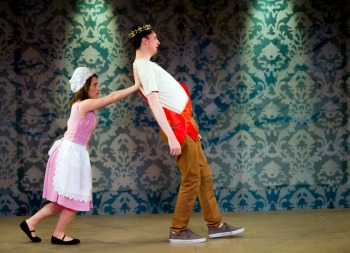 young girl, Dawn, to the Queen and to Lily the Fairy.   Likewise, Andy Shaw wonderfully and seamlessly moves from Nicodemus, the Fairy, to Fletcher, the Dog, to Prince Conner. Cella and Shaw appear to be having as much fun as the audience as they engage the audience and make them part of the story.

I also want to mention the additional members of the creative team for this show who also deserve recognition: Daniel Boylen is the Scenic Designer and created the forest backdrop, Courtney Boches is the Costume Designer and James Leitner is the Lighting Designer.

Sleeping Handsome runs at Act II Playhouse through April 24, 2016. For more information and tickets visit their website at www.act2.org or call the box office at 215-654-0200.

Final Thought: Sleeping Handsome is a creative and entertaining production that both children and adults will enjoy. If you have a chance, do not miss this show, it is a charming show in which kids will be captivated by the high-energy and interactive aspects of the production.