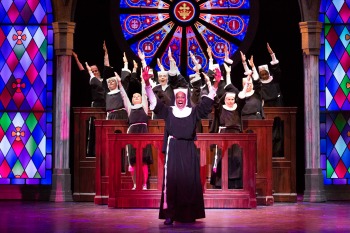 The Walnut Street Theatre closes its 2015/16 season with the delightful musical, Sister Act. This fun-filled musical is based on the 1992 movie of the same name. This production shines and will amuse audiences with entertaining musical numbers, a strong cast and dazzling costumes designed by Gail Boldoni. Walnut Street Theatre's production of Sister Act, under the direction and choreography of Richard Stafford, will delight audiences with a fun show that is full of charm.

Each time I see Sister Act I find it equally entertaining and charming. Although the show is based on the 1992 movie, there are enough differences to allow the stage version of this show stand on its own. Sister Act takes place in the 1970s in Philadelphia, and tells the story of Deloris Van Cartier, a disco diva, who has just witnessed a murder. She is placed in protective custody in a convent, a place the police are positive Deloris will not be found. However, during her time at the convent, Deloris clashes with Mother Superior. These two strong women, have very different lifestyles, but eventually Mother Superior and Deloris both rediscover their own voice. The book for this show is by Cheri and Bill Steinkellner, and playwright, Douglas Carter Beane, later contributed additional material. The show also features a score by composer, Alan Menken, and lyricist, Glenn Slater.

This show delights audiences every time the colorful nuns take the stage. They are really the heart of this story. As their relationship grows with 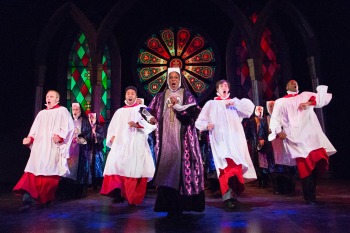 Deloris the story becomes equally heartwarming as it is humorous. Playing the role of Deloris Van Cartier is Dan'yelle Williamson. Williamson is instantly likable as the spitfire diva who is forced to seek refuge in the convent after witnessing her boyfriend commit murder. In addition, Williamson imbues Deloris with a strong personality, and her vocals throughout the show are outstanding. Playing the role of Mother Superior is Mary Martello. Martello is glorious in this role as she provides the perfect balance of spiritual commitment to her faith and cynicism towards the world at large. There is an emotional element to Martello's performance and this really comes forth in her powerful performance of the song "Haven't Got a Prayer." Also, Martello and Williamson (Deloris) have great chemistry onstage while portraying their opposing characters. Mother Superior is juxtaposed by Monsignor O'Hara who is played superbly by Ron Wisniski.  Philip Michael Baskerville plays Curtis Jackson, Deloris's gangster boyfriend who also happens to be married. Baskerville comes across as a cutthroat who will do anything to keep Deloris quiet. However, Baskerville also adds humor and style to his number, "When I Find My Baby," which is a pseudo-love number that turns into a song about how he will get vengeance on Deloris. Kent Overshown portrays Eddie Souther, a policeman who had a crush on Deloris when they were in high school together. Overshown is outstanding in his solo, "I Could Be That Guy." Laura Giknis plays Sister Mary Robert, a shy, young postulant. Giknis has remarkable character moments as her character evolves, and she is exceptional in her song, "The Life I Never Led." Another outstanding performance among the fine group of actors who play the nuns is from Melissa Joy Hart as Sister Mary Patrick. Hart adds animation and humor every time she appears, and she is delightful in this role. Lastly, I want to mention Curtis's henchmen who are brilliantly played by Fran Prisco, Tony Castellanos and Justin Keys. These three are hysterical in "Lady in the Long Black Dress," where they form a do-wop type singing trio. 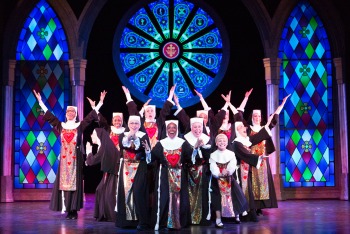 Final Thought: Sister Act at the Walnut Street Theatre is a show that will entertain and charm audiences. It is a fun-filled show full of remarkable performances that will have audience members taping their feet and bobbing their heads along with the beat in this smile inducing production.