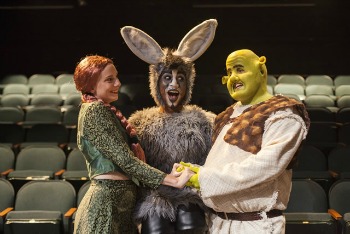 Ephrata Performing Arts Center closes its 2015 season with Shrek: The Musical. Before I write anything else about this show, if you have never seen this musical, do not miss this fun-filled show at EPAC. The cast is spectacular, and at its core this is an entertaining and heartwarming show. Director, Edward R. Fernandez does an amazing job with this production, and it is a show that is charming from the beginning of the show to the end.  Ephrata Performing Arts Center brings Shrek to life on stage with lots of laughs, incredible performances and an all-around dazzling production.

Shrek: The Musical is based on the Dreamworks 2001 film Shrek and William Steig’s 1990 book, Shrek! David Lindsay-Abaire wrote the book and lyrics, and Jeanine Tesori wrote the music. Shrek: The Musical tells the story of the green ogre, Shrek, whose swamp is overflowing with fairy-tale characters who have been kicked out of Lord Farquaad’s kingdom. In order for Shrek to get his swamp back he must recue Princess Fiona from her dragon guarded tower, so Lord Farquaad may marry her, and become king. Along the way, Shrek meets Donkey, a lively and fun loving character, and these two form a friendship. What I love about the plot of Shrek: The Musical is that it is about friendship, and being yourself. If you are a fan of Shrek you will love this show, but even if you are not, go see this production at EPAC because it is a fun show that will have audiences smiling by the end.

The cast does a remarkable job with bringing these well-known characters to life; the entire cast gives outstanding performances. In the role of 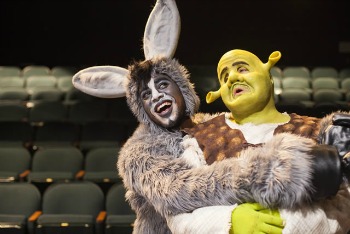 Shrek is Bryon Smith. Smith brilliantly balances the gruff side of the ogre with his warm heartedness, which made this performance seamless. Additionally, the song “When Words Fail” is powerful and an emotionally moving number. Playing Shrek’s sidekick, Donkey is Michael Roman. Roman is energetic from the moment he appears on stage and keeps this high level of energy throughout the show. Smith and Roman have great chemistry together onstage, and their duet, “Travel Song,” is strong. Taylor Luckenbill plays Fiona, and she is equally strong-minded and kind. Her song at the beginning of act two, “Morning Person,” is exceptional and is complete with a lively dance number.  There is also a number, “I Know It’s Today” that features Young Fiona (Kaia Kantner), Teen Fiona (Cora Siburt) and the adult Fiona (Taylor Luckenbill). The vocals from all three of these fine performances are excellent, and the number makes Fiona’s personality shine through. Playing the role of Lord Farquaad, Duloc’s pint-sized ruler, is Preston Shreffler. Shreffler is humorous, and is fantastic in this role. His number, “What’s Up, Duloc,” is incredibly performed and will have audiences laughing. Playing the role of the Dragon is Kristin Fidler. Fidler’s vocals in “Forever” are incredibly powerful. There is one more song that needs mentioning because not only is it full of energy, but it is also an outstanding performance by all the outcast fairy tale characters, “Freak Flag.” This cast of outcast fairy tale characters sing this song with pizzazz and gusto. 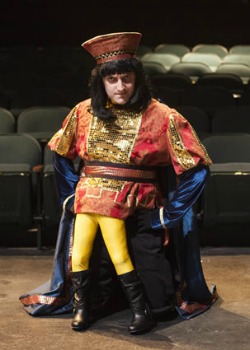 Another aspect of this show that really worked for me was the set designed by Mike Rhoads that delivered a colorful storybook feel to the show. The choreography by Tricia Corcoran was incredible and added to the energy of the production. The detailed costumes are designed by Mercedes Maccarino and Erinne Aicher. In addition, Jeff Cusano serves as the Lighting Designer, Shaun Ressler is the Sound Designer and Cheryl Markle is the Music Director.

Shrek: The Musical runs at Ephrata Performing Arts Center through December 19, 2015. For more information and tickets visit their website at www.ephrataperformingartscenter.com or call the box office at 717-733-7966.

Final Thought: Shrek: The Musical is a fun-filled show that both adults and kids will enjoy. This production has lively and strong performances, and will amuse audiences from beginning to end.