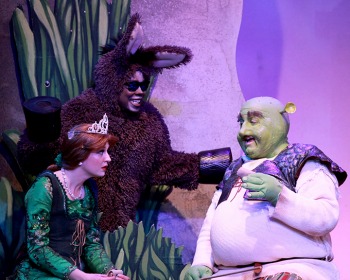 Now onstage at Dutch Apple Dinner Theatre is a sparkling production of Shrek: The Musical. This show is humorous, heartwarming, and truly delightful. This is a show that children and adults will love, as Shrek and all the characters from the movie come to life on Dutch Apple’s stage. This production is colorful, has a wonderfully talented cast, and is a must-see show this spring.

Shrek: The Musical is based on the Dreamworks 2001 film Shrek and William Steig’s 1990 book, Shrek! David Lindsay-Abaire wrote the book and lyrics, and Jeanine Tesori wrote the music. Shrek: The Musical tells the story of the green ogre, Shrek, whose swamp is overflowing with fairy-tale characters who have been kicked out of Lord Farquaad’s kingdom. In order for Shrek to get his swamp back he must recue Princess Fiona from her dragon guarded tower, so Lord Farquaad may marry her, and become king. Along the way, Shrek meets Donkey, a lively and fun loving character, and these two form a friendship. What I love about the plot of Shrek:The Musical is that it is about friendship, and being yourself. If you are a fan of Shrek you will love this show, but even if you are not, go see this production at Dutch Apple Dinner Theatre because it is a fun show that will have audiences smiling by the end.

The cast of Shrek: The Musical, under the direction of Paul Bernier, are all outstanding, each one of the actors gave an exceptional performance 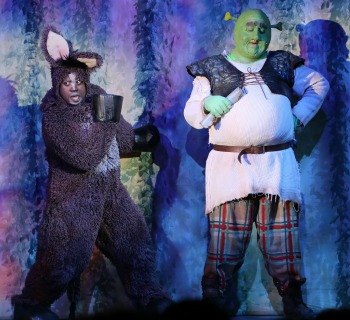 that brought their well-known characters to life. In the role of Shrek is Chuck Caruso. I loved Caruso’s accent in the show, which was Scottish, as well as enunciated perfectly to make him understandable. In addition, Caruso balances between the gruff side of the ogre and his tender side. One of his best vocals was in the second act, “When Words Fail.” Playing Shrek’s sidekick, Donkey, is Rendell DeBose. DeBose is animated and exceptional in this role. He will have audiences laughing, and his song with Shrek, “Don’t Let Me Go,” is strong. Kate Marshall plays Fiona, and her performance is seamless in this role. She provides the perfect balance of stubbornness and kindness as Fiona. The song with all the Fionas, as a young girl, teen, and adult, “I Know It’s Today,” is charming. In addition, Marshall’s song “Morning Person,” is my favorite number in the show and it is complete with a lively tap number. Playing the role of Lord Farquaad, Duloc’s pint-sized ruler, is Christopher Violett. Violett steals the show with this role. He is humorous, and he is fantastic in the song, “What’s Up, Duloc.” There is one more song that needs mentioning because not only is it full of energy, but it is powerful, “Freak Flag.” The cast of many outcast fairy tale characters sing this, and they are wonderful and full of pizzazz. Shrek: The Musical is one of the best shows I have seen at Dutch Apple Dinner Theatre, and it is one that should not be missed this season.

There are a few individuals that need mentioning behind the scenes. The Musical Director is Scott A. Williams. The wonderful choreography was originally created by Amy Marie McCleary, and recreated by Lauren Loercher Sobon. John P. White designed the beautiful constumes, and Dominic Lau created the stunning set. In addition, Russell A. Thompson is the Lighting Designer and Shawn Kreider is the Sound Designer.

Shrek: The Musical runs at Dutch Apple Dinner Theatre through June 21, 2014. For more information and tickets visit their website at www.dutchapple.com or call their box office at 717-898-1900.

Final Thought: Dutch Apple’s Shrek: The Musical is a show that should not be missed. It is a production that children and adults will both enjoy – the show is fun and engaging. It is one of the best productions I have seen at Dutch Apple Dinner Theatre.