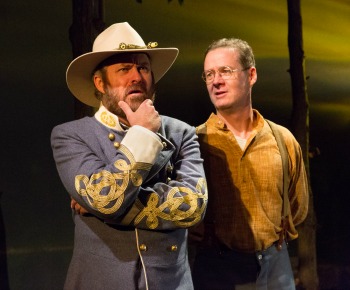 Last year, 2013, marked the 150th anniversary of Pickett’s Charge, which was a defining moment in the Battle of Gettysburg during the Civil War. The newest play at People’s Light and Theatre Company, Row After Row, is an inside look into the world of people who reenact this particular event every year, as well the passions and pride that people have in reenacting the Battle of Gettysburg. This play, however, is not just about Civil War reenactors, it is a show about three individuals who have very different personalities and their lives. Row after Row combines humor and sentiment, which makes for a play that is touching.

Row After Row tells the story of two Civil War reenactors, Tom and Cal, who have been friends since the sixth grade. Every year these two longtime friends meet in Gettysburg to take part in the reenactment of Pickett’s Charge. This year, the two friends head to a local tavern they frequent and they meet Leah, who disrupts their world and opens up a broad discussion about life and what it means to be a reenactor. According to People’s Light & Theatre Company’s press release the playwright of Row After Row, Jessica Dickey, says, “I was always so intrigued by the idea of the presence of the past, the ghosts of the past. Having grown up next door from Gettysburg and the Mason Dixon Line, the Civil War has always loomed large for me. I wrote Row After Row because I felt the need to explore the themes of the Civil War without the clichés of the political or historical, but through the personal-- the lens of these characters.” Dickey does just this in the play she explores personal meanings of Civil War reenacting, and captures the essence of this beautifully in the play.

Under the direction of David Bradley, Row After Row demonstrates the personal connection between reenactors and their enthusiasm for the Civil 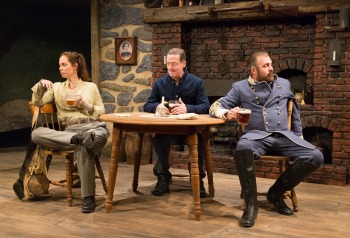 War. These Civil War enthusiasts have a deep passion for keeping the memory of the Civil War alive. In the role of Cal, the character who takes on the role of General Longstreet in the reenactment of Pickett’s Charge is William Zielinski. Zielinski convincingly portrays this “hard-core” reenactor; he captures the spirit of pride that reenactors have in keeping historical context within the reenactment. Kevin Bergen plays Tom, who represents the part of the Union deserter in the reenactment. Tom is a more sensitive character, and Bergen brings forth the internal emotional struggles of this character with grace. Rounding out this cast is Teri Lamm, who plays the very opinionated Leah. Leah is a “newbie” to reenacting, and she begins questioning Cal and Tom about reenacting as well as challenging some of their beliefs about reenactment. Lamm skillfully depicts how Leah evolves from an opinionated and argumentative character to someone who is vulnerable and starts to reveal a softer side.

Row After Row runs at People’s Light and Theatre Company through November 9, 2014. For more information and tickets visit their website at www.peopleslight.org or call their box office at 610-644-3500.

Final Thought: Row After Row is a short play, it runs about 80 minutes, but it is a show full of significant and thought provoking dialogue. Each of the actors provide an engaging and emotional performance as they bring their complicated characters to light.