ROUNDING THIRD is a Homerun at Act II Playhouse 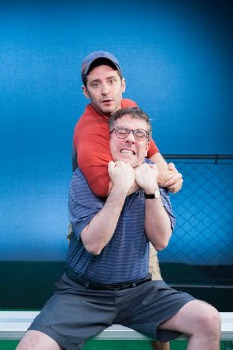 Act II Playhouse opened its sixteenth season last weekend with Rounding Third. This play, beautifully written by Richard Dresser, tells the story of two Little League coaches, who have very different attitudes towards the game. One coach, Michael, is the assistant coach who has little knowledge about baseball and how the game is played. The other coach, Don, has been coaching Little League for years and was part of a team in his childhood. This production of Rounding Third is brilliantly performed, moving and intelligently funny, making this show a season opener for the 2014/15 season at Act II Playhouse that knocks it out of the ball park.

Director Matt Silva has assembled two incredibly talented actors, Tony Braithwaite and Michael Basile, for this production. These two fine actors have great chemistry onstage and their intensity and styles complement one another in such a way as to give life to the story and make you feel as if the Little League players are just out of eyeshot. Braithwaite plays Michael, a new assistant coach who has an office job with a large corporation in the city. His attitude toward Little League is “the fun is in the playing; not the winning or losing.” Braithwaite is known for his comedy skill, and this show has ample humor, but in this show, he also demonstrates his ability to breathe emotional life and depth into his character that provides for a deeply moving performance. This show highlights Braithwaite’s impeccable talents and showcases his ability to convey the humanity of a character. Basile makes his Act II Playhouse acting debut playing Don, a veteran Little League coach, who revels in his past glory days playing baseball, and works as a house painter to put bread on his family’s table. His approach 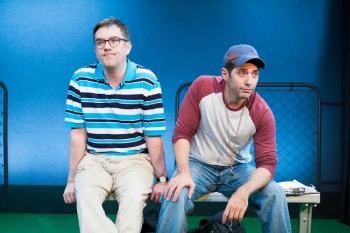 towards Little League is “winning is fun, losing sucks.” Basile convincingly plays Don, a rough around the edges, tough-skin, blue-collar worker who believes winning is everything and is willing to enter some rather grey areas to reach those ends. Basile plays Don in such a way that even though you may not fully agree with his motives you can feel for and respect his choices. What made this show work was how these two fine actors complement one another, it was as if I was watching a friendship develop and mature onstage. This show is about so much more than the conflicting opinions of two coaches; it is also about friendship, family, finding common ground and the humanity within each of us. Rounding Third is one show that you do not want to miss this fall.

I also need to mention the Artistic Team for Rounding Third. The creative set for this show was designed by Adam Riggar.  The Sound Designer is Larry Fowler. Jill Keys designed the costumes, and the Lighting Designer is James Leitner.

Rounding Third runs at Act II Playhouse through October 12, 2014. For more information and tickets visit their website at www.act2.org or call the box office at 215-654-0200.

Final Thought: Rounding Third is an outstanding show that showcases the remarkable talents of Tony Braithwaite and Michael Basile. In addition, it is a show that will make audiences laugh, shed a tear or two, but most of all it will spark a discussion on the way home. In my opinion, this is the perfect theatrical experience.