Ringing In THE HUNCHBACK OF NOTRE DAME at Paper Mill Playhouse 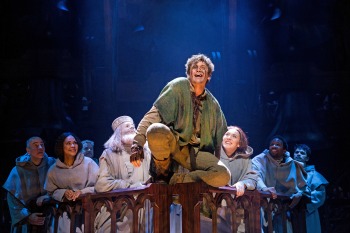 Paper Mill Playhouse brings The Hunchback of Notre Dame to their stage. This musical is a production in association with LaJolla Playhouse and is based on the novel by Victor Hugo. The show is about Quasimodo, a reclusive hunchback, who is the bell-ringer for Notre Dame, and whose life is changed when he meets a gypsy by the name of Esmerelda. This musical is bold, daring, and definitely one that is well worth seeing at Paper Mill Playhouse.

The stage adaptation of The Hunchback of Notre Dame is based on the 1831 Victory Hugo novel with songs from the Disney film of the same name. The book for this production is by Peter Parnell, music by Alan Menken and lyrics by Stephen Schwartz. This production has a rich score and vibrant characters, which all bring this incredible story to life on Paper Mill’s stage. The musical tells the story of Quasimodo, the bell ringer at the cathedral of Notre Dame, Esmeralda, a gypsy who is kind-hearted and compassionate, a mercenary soldier who falls in love with Esmeralda and an impassioned and flawed archdeacon who tries to prevent their happiness. The Hunchback of Notre Dame conveys the message of being kind and compassionate towards others, as well as finding inner strength. The musical has beautiful musical numbers, a dazzling cast and even immense bells that make frequent appearances.

The Hunchback of Notre Dame, under the direction of Scott Schwartz, has an incredible cast who are superb in their roles. Playing the role of 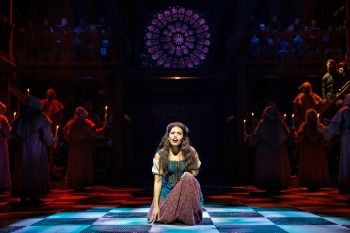 Quasimodo is Michael Arden. Arden is strong vocally and gives a moving performance. He has the ability to make the audience empathize with his character and his song “Out There” is striking. Patrick Page plays the role of Dom Claude Frollo, the archdeacon of Notre Dame who also is the antagonist of the show. Page is terrific in this part, and his performance is outstanding. Page seamlessly portrays this conflicted and righteous character. His vocals and performance in the number “Hellfire” are exceptional.  In the role of Esmeralda, the compassionate gypsy, is Ciara Renée. Renée is full of life and brings out her character’s caring nature; audiences will immediately like her. In addition, Renée is strong in her dance numbers, and her song “God Help the Outcasts” is powerful. Andrew Samonsky plays Captain Phoebus de Martin, the mercenary soldier and captain of the guard of Notre Dame who falls in love with Esmeralda. He is perfectly contrasted with Quasimodo and Esmeralda as he seems self-absorbed and only concerned with his own well-being, but in the end he does discover a conscience and compassion within himself. Erik Lieberman portrays Clopin, the King of the Gypsies. Lieberman is animated and colorful in this role, and he adds a good deal of energy and liveliness to the stage. One of my favorite aspects of this production is the incorporation of the bells in the show. The show begins with the number, “The Bells of Notre Dame” and it is a grand song. The bells in this show, and especially in this song are a character unto themselves and they are an impressive presence on the stage. I also want to mention that Continuo Arts Symphonic Chorus serve as the choral ensemble in this show. They are amazing to listen to, and further help to create the sense of the soaring majesty of the cathedral of Notre Dame.

I would be amiss if I did not mention the artistic team behind this spectacular production. Chase Brock serves as the Choreographer. Alexander Dodge designed the majestic set. Alejo Vietti created the amazing costumes. Howell Binkley serves as the Lighting Designer and Gareth Owen is the Sound Designer. Steve Rankin is the Fight Director. And lastly, Brent-Alan Huffman is the Music Director. 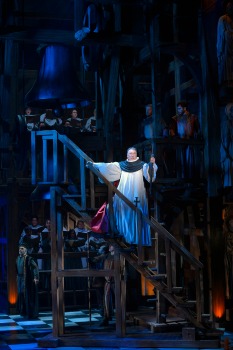 The Hunchback of Notre Dame runs at the Paper Mill Playhouse through April 5, 2015. For more information please visit their website at www.papermill.org  or call their box office at 973-376-4343.

Final Thought: The Hunchback of Notre Dame is an exceptional production with first-rate performances and a rich score. This show captures the heart of the Hugo novel and brings it to life on Paper Mill’s stage. This is a production you do not want to miss this year.

Photo 1: Photo by Matthew Murphy; Michael Arden (Quasimodo) and the company of The Hunchback of Notre Dame

Photo 2: Photo by Matthew Murphy; Ciara Renée (Esmeralda) and the company of The Hunchback of Notre Dame

Photo 3: Photo by Kevin Berne; Patrick Page (Frollo) and the company of The Hunchback of Notre Dame