Review: THE BOOK CLUB at Villanova Theatre is Full of Laughs and Heart 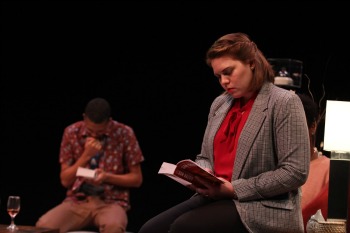 The Book Club Play currently onstage at Villanova Theatre is a play full of laughter as well as being a love letter to bibliophiles. As much as this plays pokes fun at those who are book lovers and those who only pose as book lovers, it also discusses the difference between art and culture and begs the question if there even is a difference. The play is hilarious and the cast is outstanding. Audience members will probably find characteristics of themselves in at least one of the characters onstage. The Book Club Play at Villanova Theatre, under the direction of James Ijames, is a riotously funny play with a strong cast and lovely set; it is definitely a night well spent at the theatre.

The Book Club Play is a play written by Karen Zacarias. The plot centers on a modern day book club, which recently has become the center of a documentary. The leader of the book club, Ana, feels like it is her duty to better the lives of others by suggesting classic literature to read. There are many different personalities in the group and it makes for a hilariously funny show. What I loved about Ijames’s smart production is that not only were the performers connecting with each other, but they also connected with the audience. The audience was made to feel as if they were watching the documentary of the book club, and this production achieves this through various clever lighting and staging techniques.

Playing the role of Ana, the leader of the book group who loves reading classic literature, is Amy Abrigo. Abrigo is terrific as the character who 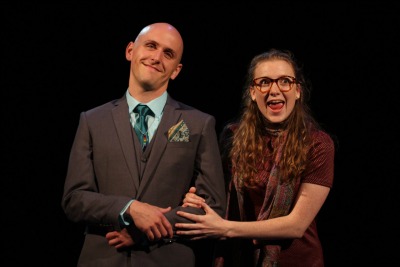 truly believes that books of classic literature are the only books worth reading. Her character comes across as snobbish, but there are times when Abrigo brings out the insecurities of this character. In addition, the meltdown she has at the end of the play is well done. Playing Ana’s husband, Robert, is Ethan Mitchell. Mitchell gives an excellent performance as his character is struggling to fit in with the book club as he never reads the books. Playing Rob’s best friend, William, is Kale A. Thompson. His character seems to share a similar attitude as Ana in regards to classic books. Thompson is hysterical in this show, and many of his lines and scenes are hilarious. Portraying a friend of Will’s, Jennifer, is Mary Lyon. Lyon brings out the endearing and quiet qualities of this character and artfully evolves to take charge in the second act. Lyon adds a brightness to the show with her character. In the role of Lily, a co-worker of Ana, is Kishia Nixon. Nixon is full of energy from the time she enters the stage until the end of the show. In addition, Nixon makes Lily the most grounded character in the show and it is fun to watch her dynamic with the other characters. Jerald Bennett portrays Alex, a literary professor who is trying to keep up-to-date on popular books such as Twilight and The DiVinci Code. Bennett’s Alex enters the play with confidence and he does not let this character be deterred by Ana and her attitude towards popular books. Rounding out this cast is Shawneen Rowe, she wonderfully plays a variety of characters throughout the show that describe what books they personally enjoy. On a whole The Book Club Play is a show that will please audiences especially those who enjoy reading. What I particularly loved about the show is the way it presents itself as a light-hearted show, brings to light an important discussion about what makes a book literature. 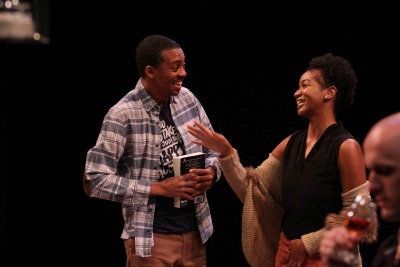 On a personal note, this was my first time seeing a show at Villanova Theatre. I was impressed by everything from the staff in the box office to the set design to the play.  That being said I need to mention the Artistic Team. The Scenic Designer is Parris Bradley. Courtney Boches designed the costumes. Jerold R. Forsyth is the Lighting Designer and John Stovocek is the Sound Designer. Lastly, CJ Miller serves as the Dramaturg.

The Book Club Play runs at Villanova Theatre through September 30, 2018. For more information and tickets please visit their website at www.villanovatheatre.org or call the box office at 610-519-7474.

Final Thought: The Book Club at Villanova Theatre is a hysterically funny show that is really a love letter to those who have ever been part of a book club. This show is well done and is full of energetic and memorable performances. This production at Villanova is a fun-filled night at the theatre.