Review: THE BLUEST EYE Is a Moving Production at Arden Theatre Company 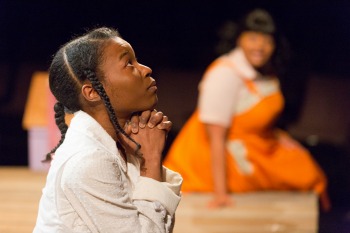 The Arden Theatre Company’s production of The Bluest Eye is one that begs to be discussed after the show. I also feel that was Toni Morrison’s intent when she wrote the book. It is a novel that a person could spend hours discussing all the different themes in the book, and that goes for the play as well. Director, Raelle Myrick-Hodges did a beautiful job bringing this story to life. The story transitioned well to a live production, and it is exquisitely told on stage at the Arden. The cast and crew did an excellent job capturing the heart and importance of the story. The production is one that will stay with you long after seeing it, and it is one that is best enjoyed with friends that allow for a discussion after the show.

The Bluest Eye was Toni Morrison’s first novel and it was published in 1970. The stage version was adapted by Lydia R. Diamond in 2007. The play is set in Ohio in 1941 and the story revolves around a young girl, Pecola Breedlove who constantly prays to God to make her eyes blue, so she will be seen as pretty. The play depicts the psychological effects of race stereotypes portrayed in popular media on children. The children become accustomed to and in some cases accept they cannot be beautiful since to achieve this they must have blond hair and blue eyes like Shirley Temple. Pecola wants to be loved by her family and friends, but she faces a world of abuse and mockery. She believes having Shirley Temple’s blue eyes will bring her happiness. Where this play thrives is in the way in which Diamond retains the soul of the novel in this stage adaptation. The imagery that Morrison writes about in the novel is evident throughout the play.

Playing the role of Pecola Breedlove is Jasmine Ward. Ward captures Pecola’s social awkwardness and desire to escape the world she is living in. Nicolette Lynch and Renika Williams play two sisters, Claudia and Frieda. These two sisters are complete opposites personality wise and they 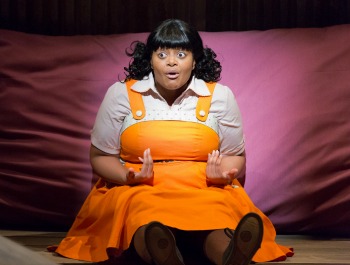 serve as a narrator to the story as they talk about the perceived injustices in their home and town. Lynch who portrays Claudia has a huge personality onstage and she adds some levity at times through her brutal honesty. Lynch has great energy onstage. Williams portrays Frieda who has a bright personality. The chemistry between Williams and Lynch is remarkable as is their entertaining performances as the narrators. Eliana Fabiyi portrayed Maureen Peal, who is light skinned and wealthy, and who Claudia does not like. Fabiyi has a vibrant presence onstage. Soraya Butler plays Claudia and Frieda’s tough loving mother. What I liked about Butler’s performance is that although she seemed tough there were moments when she offered kindness and love to her children and Pecola. Chavez Ravine plays Mrs. Breedlove who is Pecola’s mother. Ravine gives a gripping portrayal as a woman who has had many years of hardship and pain. Damien J. Wallace plays Soaphead Church, self-declared “reader, adviser, and Interpreter of dreams.” Wallace is commanding in this role as he adds a level of mysticism to the play. Rounding out this cast is Reggie D. White as Cholly Breedlove, Pecola’s father. White gives an intense and powerful performance as a character who evolves from an innocent young man to someone who is resentful and full of rage. 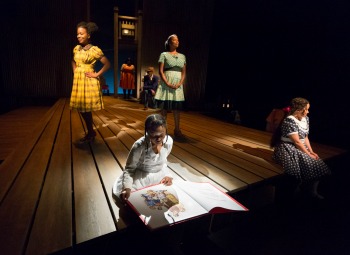 The artistic team also needs mentioning for this powerful show. David P. Gordon designed the remarkable set. Thom Weaver is the Lighting Designer and Mikaal Sulaiman is the Sound Designer. Levonne Lindsay designed the costumes and Antonio Brown serves as the Choreographer.

The Bluest Eye is at the Arden Theatre through April 8, 2018. For more information please visit their website at www.ardentheatre.org or call their box office at 215-922-1122.

Final Thought: The Bluest Eye at Arden Theatre Company is a play that will have audiences thinking about the play for a while after the play is ended. The production is full of outstanding performances, dialogue and symbolism. The Bluest Eye is a powerful show that lends itself to discussion after the show is over.