Review: SUCH A THING AS VAMPIRES Thrills at People’s Light

Fall is in the air, leaves are beginning to turn, jack-o-lanterns are appearing on porches, and nothing celebrates this time of year better than edgy theatre and scary movies and books. In the current production at People’s Light, Such a Thing as Vampires, they manage to take a classic text, Dracula, and incorporate the story into a play that keeps audiences on the edge of their seat and pushes boundaries, including the fourth wall. Personally, I thought there was so much to like about this show, and I especially appreciated the immersive experience created for the audience as well as the originality of the production. People who enjoy experiencing the macabre this time of year or want something original to do to celebrate Halloween then this play is for you. Under the direction of Stuart Carden, Such a Thing as Vampires is an excellent show in which the creators of this original play take a classic text and reimagined it, and the show provides for a fun and exhilarating night of theatre.

Zak Berkman, Stuart Carden, Jessie Fisher, and Mary Tuomanen created and conceived Such a Thing as Vampires and it is one of the more creative retellings of Bram Stoker’s Dracula that I have experienced. The play is basically a retelling of the classic vampire tale, but it is presented from a standpoint of being Lucy and Mina’s story. The show has a punk-rock twist as a band, The Preventers, serve as the narrator. As much as I loved the originality of the retelling of the story, I also was thrilled to see how the writer kept some of the aspects of the novel by incorporating letters and many of the characters from the book. It felt as if it was an updated version of the vampire story.

Playing the role of Mina is Crystal Lucas-Perry. Lucas-Perry does an excellent job with this character as she struggles with the love for her fiancé, 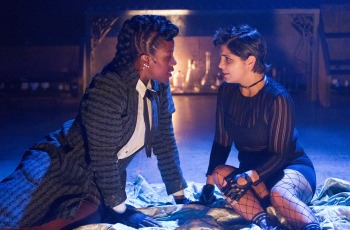 Jonathan Harker, and the relationship with her best friend, Lucy. What really stands out with her performance is how she portrays her character partly maintaining Victorian mannerisms, but with a modern twist. This is why the story worked for me, the play pays homage to the Victorian novel, but updates it with modern themes. Playing Lucy, Mina’s best friend, is Isa Arciniegas. Arciniegas gives a powerful performance as she portrays this strong character who seems sure of herself and how she feels towards Mina. Lucas-Perry and Arciniegas have good chemistry onstage, and their friendship seems authentic. In addition, the audience can feel Lucy’s heartbreak when Mina leaves her. Also, additional members of The Pretenders are: Daniel Croix Henderson, Sam Henderson, Alex Lydon and Pearl Rhein. This group has great songs throughout the show that each tell a part of the story. What stood out for me is the variety of different musical styles throughout the show.

I also need to mention that this show may not be for everyone. There is loud music and sexual themes. That being said, I thought this production of Such a Thing as Vampires was done well. I enjoyed the way the fourth wall is broken and the audience is drawn in as part of the show. I do not want to give too much away in explaining how the fourth wall is broken, as you should experience it for yourself. I felt this show was unique, and done in a way that is perfect for the Halloween season. 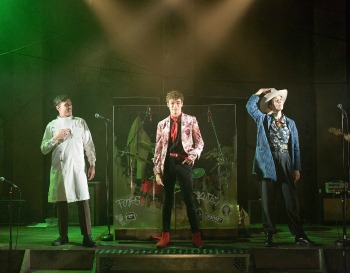 I would be amiss if I did not mention the artistic team. Arnel Sancianco designed the set. Melissa Ng is the Costume Designer. Isabella Byrd serves as the Lighting Designer and Lee Kinney is the Sound Designer. The Fight & Intimacy Director is Eli Lynn. Gina Pisasale is the Dramaturg. Lastly, Macie Poskarbiewicz is the Assistant Director.

Such a Thing as Vampires runs at People’s Light through October 31, 2018. For more information and tickets please visit their website at www.peopleslight.org or call the box office at 610-644-3500.