Review: PICNIC at EPAC is a Delightful and Heartrending Play 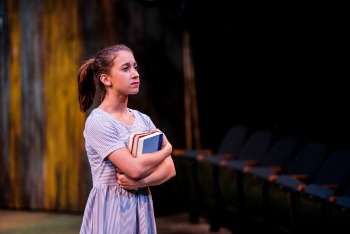 Currently onstage at Ephrata Performing Arts Center is the American classic play, Picnic. Under the direction of Michael Swanson, this play is extremely well done especially in regards to the focus being the relationships between the characters. I was immediately drawn into the story from the moment I stepped foot into the theatre upon seeing the set. Every aspect of this show tells a story from the set to the costumes to the performances. This production of Picnic grabbed my attention from the moment it started. The show is a story of coming of age, past regrets and wishes for the future. Bravo to the cast and crew of this production of Picnic – it truly is a magnificent play and a beautiful piece of theatre.

William Inge wrote Picnic in 1953 and it premiered on Broadway in 1953. The play was also made into a film in 1955. Picnic takes place in a small Kansas town in 1953. It is a portrait of what life was like in a midcentury small town and the play is a riveting exploration of love and loneliness. The title refers to a picnic that occurs annually before the beginning of the school year and everyone is preparing for the event.  The center of the play concerns a drifter who comes to town, Hal Carter, as he steps into the lives of Flo Owens and her two daughters. The show examines young love as well as regrets and loneliness. Even though the play is over sixty years old the themes are still remarkable poignant today.

The entire cast of Picnic did an excellent job bringing this play to the stage. They all did a wonderful job bringing out the humanity and complexity 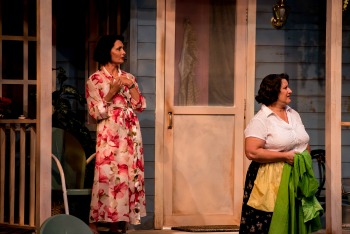 of the characters as well. One performance that is the highlight of the show is by Willa Beidler who plays young Millie Owens, a spunky and smart teenager who wishes to be admired in such a way as her beautiful older sister. Beidler steals many of the scenes throughout the show as she commands the attention of the audience and plays Millie as she is full of wit and charm. In the role of Millie’s older sister, Madge, is Taylor Coan. Madge is thought of as a beauty queen, and is expected to find a suitable husband and settle down. Coan does a remarkable job at evolving from the young woman who goes to work and will eventually marry the right suiter to a person full of passion and chasing love. The way Madge’s storyline unfolds can be difficult to portray and Coan did a magnificent job at making the audience sympathize with her feelings.   Flo Owens, the protective mother of Madge and Millie, is portrayed by Tricia Corcoran. Corcoran’s performance is impeccable as she is perfectly stern with her daughters as well as wanting the best for them. Elizabeth Pattey is endearing as the next door neighbor, Helen Potts. Pattey adds levity to the show with this role as well as gives a lively performance. Joe Swaggerty plays the role of Hal Carter, the drifter who is hired by Helen Potts to do odd jobs around her property. Swaggerty gives an outstanding performance as Hal. He brings more to this role than good looks, he presents a character who is not only charming and spirited, but also naïve and vulnerable. In addition, 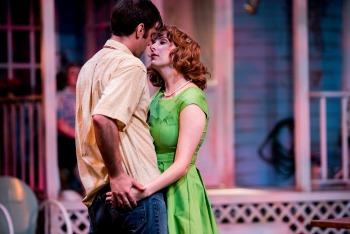 Swaggerty portrays the charming stranger who sweeps into town and affects the lives of those he encounters. What the audience finds out is there is more to this character than what meets the eye. Sean Deffley plays Alan Seymour, Madge’s beau and Hal’s fraternity brother. Deffley gives a smart performance as his Alan comes across as kind, intelligent and shows an interest in not only Madge but the people she cares about as well. I found Deffley’s performance distinguished in a role that can sometimes be understated.

One of the more heartbreaking scenes in the show comes from a scene between Rosemary (Lynne DeMers-Hunt) and Howard (Bob Checchia.) In the scene Rosemary, who is a school teacher who also rents a room from Flo Owens, is afraid she will be spending the rest of her life alone. She comes to a point where she fears that the man she has been dating for some time, Howard, will stop calling on her. She begs him to “Please call.” This scenes is full of emotion and desire, and the scene emits Rosemary’s anguish. This is an excellent scene and DeMers-Hunt’s distress is one that is affecting. Lastly, Ethan Reimel, Lisa Harris and Cheri Fogleman round out an accomplished ensemble. 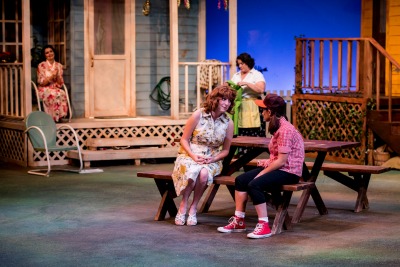 team. Jordan Janota is the Scenic Designer. Chris Dissin is the Sound Designer and Michael Wiltraut is the Lighting Designer. Veronica Craig designed the amazing costumes. Tricia Corcoran is the Choreographer and Dan Burke is the Fight Choreographer.

Picnic runs at Ephrata Performing Arts Center through September 15, 2018. For more information and tickets please visit their website at www.ephrataperformingartscenter.com or call the box office at 717-733-7966.

Final Thought: Picnic at Ephrata Performing Arts Center is a beautiful and timeless piece of theatre. Director, Michael Swanson, does an excellent job making the focus of the show the relationships between the characters. If you have never seen Picnic onstage (or even if you have) this is an outstanding show with a magnificent cast. The show will make you laugh as well as evoke emotion. It is a well-done production of a classic play.

Did we see the same show? This is an awful production

There is no chemistry between the leads

It was so dry; I nearly fell asleep.

The secondary characters were much better in their roles. I always enjoy EPAC's shows, but Picnic was no picnic.