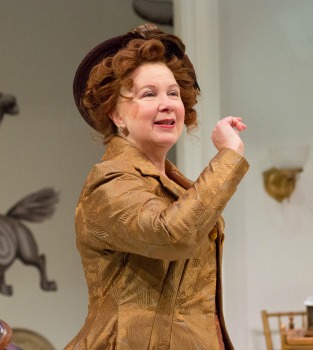 The Matchmaker at People’s Light is an incredibly well-done production. Director, Abigail Adams, captures the heart of this play by Thornton Wilder and draws the audience into the story. The Matchmaker works in every aspect of the show from the script to the lighting to the music to the set. Each aspect that makes a successful production comes together to create this beautiful and delightful show. The production is grand and it will touch the hearts of the audiences as well as have them laughing. What this production of The Matchmaker at People Light does is remind audiences that the play delivers just as much life and charm as the well-known musical adaptation to provide the audience with a pleasingly good time.

The story of Thornton Wilder’s The Matchmaker became ubiquitous in the musical theatre lexicon in the musical Hello, Dolly!. The play, The Matchmaker, began its Broadway run in 1955, and the show revolves around Horace Vandergelder, a wealthy New York businessman who employs a matchmaker, Mrs. Levi, to find him a wife. Vandergelder does not realize that Mrs. Levi is also looking to marry and she is determined to marry Horace Vandergelder. This play at People’s Light is witty and charming, and it is a show that audiences will enjoy because it is an exceptional production.

The entire cast for this show is strong, every actor gives a solid performance. One of the aspects that makes this show stand out is the inclusion of preshow entertainment, before the show begins members of the cast are onstage playing instruments and singing, and it is a joy to watch the joy radiate from the performers, and the musicians. Liz Filios deserves mentioning 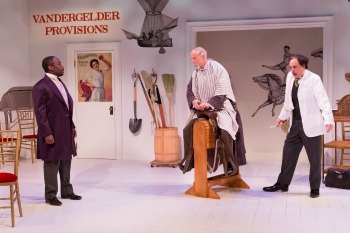 here because she is the composer/music director/sound designer, and she assists in adding zest to the preshow and several other moments within the show. Playing the role of the matchmaker, Mrs. Levi is Kathryn Petersen. Peterson gives a top notch performance that brings out the magnetism of the character’s charm as well as her strength. Petersen is full of pizzazz in this role and makes the audience see that Mrs. Levi’s motives are not entirely selfish, she really believes in love and wants to see everybody in fulfilling relationships. Graham Smith plays Horace Vandergelder, a cantankerous and successful businessman. Smith perfectly brings out the irritableness of his character, and there is the right balance of irritability toward and concern for his niece, Ermengarde.  Mina Kawahara portrays the weepy Ermengarde who is madly in love with the artist, Ambrose Kemper (played by James Ijames). Kawahara and Ijames are paired beautifully in these roles as they authentically capture the growth of their characters as the play develops. Horace Vandergelder’s overworked clerks, Cornelius Hackl and Barnaby Tucker are played by Brandon Meeks and Christopher R. Brown.  Meeks and Brown have great chemistry onstage and their antics have audiences laughing throughout many scenes of the show, particularly the scenes in the hat shop. I particularly appreciated how Meeks and Brown play well off each other. Mrs. Malloy, a milliner and owner of the hat shop, is played by Teri Lamm. Lamm is wonderful as Mrs. Malloy. She is hysterical and animated particularly in the restaurant scene, but she also brings out her characters feelings that she is missing out on life and desires adventure. Playing Mrs. Malloy’s assistant, Minnie Fay, is Tabitha Allen. Allen is superb as the naïve Minnie Fay, and her scenes with Lamm work well because they complement one another in such a way as to create an inviting and humorous synergy. Lastly, I need to mention Melanye Finister as Miss Flora Van Huysen, a friend of Vandergelder’s late wife, who is waiting for Ermengarde’s arrival in New York City. Finister is fantastic as this hopelessly romantic and eccentric character. 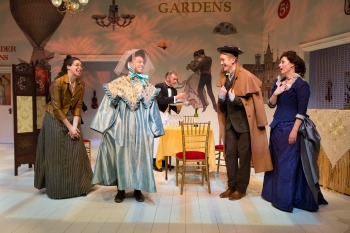 The set for The Matchmaker is an artistic hommage to the show and designed by Tony Straiges. Marla Jurglanis designed the beautiful costumes, in particular, Ermengarde and Mrs. Levi’s dresses are stunning. Dennis Parichy is the Lighting Designer. Samantha Reading serves as the Choreographer.

The Matchmaker runs at People’s Light through March 12, 2017. For more information and tickets visit their website at peopleslight.org or call their box office at 610-644-3500.

Final Thought: The Matchmaker at People’s Light is a delightful show that is sure to please audiences. The production bursts with energy and sentimentality. The show is full of heart, and each performer delivers a strong performance. This is a production in which all the elements of the show combine in just the right way to create a wonderful night of live theatre.