Review: Paper Mill Playhouse Presents an Exhilarating Production of HALF TIME: THE MUSICAL

The world needs more musicals like Half Time right now; a musical that audiences may walk into a theatre and escape whatever troubles and stresses they are facing, at least for a few hours. Half Time is a musical full of positivity, energy and determination. It is a show that delivers the message of embrace who you are no matter what your age. The musical directed and choreographed by Jerry Mitchell tells the story of a group of individuals who are 60 years old or older who are selected to be a part of a newly formed New Jersey Cougars hip-hop squad. The musical is fun and moving, and it gives the audience a dose of positivity. In addition, this cast is incredible. The cast is full of people many of us grew up watching either on stage or screen, and it is spectacular to see them together in one show. Half Time is a powerhouse of a musical that will leave audiences full of joy and it is a reminder that you can chase your dreams no matter what you age.

Half Time tells the story of ten seniors who audition to dance at the half-time show of the fictional professional basketball team, the New Jersey Cougars. This musical is based on Dori Berstein’s 2008 documentary Gotta Dance that chronicles the debut of the New Jersey Nets’ first ever senior citizen hip-hop squad. The book for the musical is written by Bob Martin and Chad Beguelin. Matthew Sklar wrote the musical and the lyrics are by Nell Benjamin. Complete with energetic dance numbers that are choreographed by Jerry Mitchell this musical will delight audiences of all ages.

The musical loosely follows the story of the real team that was made up of twelve women and one man. The cast of this production are 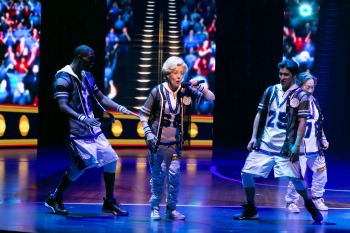 sensational and give strong performances. Some of the actors who portray members of the dance team are: André DeShields, Georgia Engel, Donna McKechnie, Lillias White, Lori Tan Chinn and Nancy Ticotin. Georgia Engel plays Dorothy a retired teacher whose alter ego, Dottie, has a love for hip-hop. Engel is fantastic is this role as she is full of humor and heart. Her song, “Dorothy/Dottie” is hysterical. André DeShields portrays Ron, a man who is trying to get out in the world, but who is still struggling after the death of his wife. DeShields gives a stellar performance and has an amazing dance number in “The King of Swing.” Lillias White plays Bea, a candid grandmother who is trying to renew the relationship with her granddaughter, Kendra, (played by Nkeki Obi-Melekwe.) Bea is looking to enjoy life and be a part of this team to have a good time. White and Obi-Melekwe have great scenes together throughout the show in a recurring number, “My Princess.” However, seeing the way in which White’s character influences her granddaughter to have confidence and respect for herself in “Princess 3” is one of the highlights of the show. Lori Tan Chinn portrays Mae, a character who seems to be full of joy and positive energy. I always am thrilled when I see Chinn on the stage, and in this show her character adds levity and eagerness to the musical. In addition, Chinn has one of the more serious songs in the show, “The Waters Will Rise,” which is about her husband’s Alzheimer’s. Chinn adds heart to this heart wrenching song. Nancy Ticotin plays Camilla, a dancer who has a boyfriend that is significantly younger than her. Ticotin is vivacious in this role. Her salsa 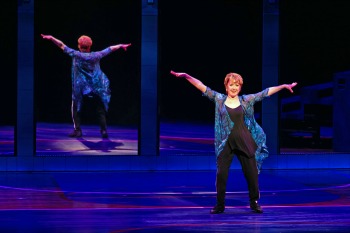 infused dance number “¿Cómo No?” is another highlight of the show. Donna McKechnie portrays Joanne, a woman who gave up her early dancing career in the theatre for her husband. McKechnie gives a solid performance and a standout performance in her number, “Too Good For This.” This song and dance number is definitely a nod to McKechnie’s role as Cassie in A Chorus Line, as it is reminiscent to “The Music and the Mirror.” The night I was in attendance this song was met with raucous applause. Lastly, I need to mention Haven Burton, who plays Tara, a dancer who has “aged out” of the conventional dance squad and who is in charge of teaching the senior member of the newly minted squad their dance routine. Burton lends her powerhouse of a voice to the show, especially in the song, “Who Wants to See That? (reprise.)” One thing I wanted to mention, as much as I thought everyone worked well individually they were magnificent as a group. The collective dynamic of this show is spectacular, and the final number of the show “Gotta Get Up” is marvelous.

I also need to mention the artistic team behind this show. David Rockwell was the Scenic Designer. The costumes that reflected each of the characters’ personalities was designed by Gregg Barnes. Kenneth Posner is the Lighting Designer and Randy Hansen is the Sound Designer. Projection Design is by Jason Lee Courson. Additionally, Orchestrations were done by Larry Hochman, and Charlie Alterman serves as the Music Director.

Half Time runs at Paper Mill Playhouse though July 1, 2018. For more information and tickets visit their website at papermill.org or call the box office at (973)376-4343.

Final Thought: Half-Time is an entertaining and energetic show. The basic plot of nine individuals breaking ageist stereotypes to dance in front of a crowd is a delightful night of theatre. Include on top of that a strong and legendary cast with choreography and direction by Jerry Mitchell, this show is not to be missed. This show infuses the audience with joy and happiness.