Currently onstage at Paper Mill Playhouse is the East Coast premiere of the new musical Benny & Joon. I will admit, I have been looking forward to Paper Mill’s production of this show since the season announcement in 2018. In college, I had seen the movie countless time in the spring of 1993. I loved the story, specifically the story between the siblings of the movie, Benny and Joon. The musical version captures all the things I loved in the movie and brought them to life on the stage. This musical will make audiences laugh as well as take them on a nostalgia-filled emotional journey. Paper Mill Playhouse’s production of Benny & Joon, under the direction of Jack Cummings III, is a brightly colored musical journey complete with an exceptional cast, a stunning set and beautiful music.

The musical Benny & Joon is based on the 1993 movie of the same name. The movie was directed by Jeremiah S. Chechik and starred Aidan Quinn, Mary Stuart Masterson and Johnny Depp. The book for the musical is by Kirsten Guenther, music by Nolan Gasser, and lyrics by Mindi Dickstein. The plot of the musical is about two siblings, Benny and Joon. Their parents died in an accident when they were younger and Benny, being the older child, takes on the responsibility of caring for his sister, Joon, who is dealing with mental illness. A charming and eccentric stranger, Sam, enters their lives and reminds them how to laugh and live their lives. It is a tenderhearted celebration of love between siblings and friends. The thing I really valued in the musical is how the writers took plot points from the movie and fleshed them out for the stage. An example of this is the stories behind the characters of Benny, Joon and Sam all have more of a backstory in the musical, which gives the characters more depth. The musical version of Benny & Joon is really about the love between siblings, the importance of family and finding those people who become like family.

One of the first things I want to talk about in this review in the incredible set designed by Dane Laffrey. The backdrop for most of the show is a huge diorama that shows the area of Spokane, Washington in which the musical takes place. The best way I can describe it is similar to the satellite view on Google maps in a modeled three dimensional format. The set is extremely detailed and as the action onstage takes place different areas of the diorama light up to depict where in the city the scene is taking place. This part of the set is so incredible it received applause the night I was in attendance of the show.

As in any new musical there are always positives and negatives to the show. There are definitely many more positives to this production. Fans of the movie will find many of their favorite scenes recreated for the stage. One of the biggest highlights of this show is the stellar cast. The actors that were cast in this show are perfectly suited for each of their roles. Hanna Elless plays Joon, the younger sister who has schizophrenia. Elless is exceptional in this role as she brings a kindness and independence to this character. What I love about Elless’ performance is that she makes Joon strong, and that even though Joon has schizophrenia she is independent and wants to achieve her dreams. Another stand-out in the show is Claybourne Elder as Benny. He portrays the stronger older brother who lives to protect Joon. Elder radiates with compassion as soon as he enters the stage. He makes sure that Benny comes across as a likable character and it is evident that Benny strives to make sure Joon is well cared for. The chemistry between Elless and Elder is strong as they portrays the siblings. One of my favorite numbers in the show is “Benny and Joon.” There is something powerful and emotional about watching the bond between these two characters, and that comes forth in this song. Another standout song by Elder is the song, “One Good Day.” There is so much heart and raw emotion in the lyrics and Elder shines in this number. Bryce Pinkham is brilliant as Sam, an eccentric and likable character. Pinkham’s antics in this role are amusing to watch and he imbues a scene with an energy that comes across throughout the show. I found Sam more interesting in the musical than I did in the movie. What I loved about Pinkham’s performance is that he has a gift for physical comedy and this comes through as Sam is a devotee of Buster Keaton. What works for me is how the three roles of Sam, Joon and Benny all seem to bring out the best and worst of each other and this makes all three characters very relatable. Lastly, I want to mention Tatiana Wechsler as Ruthie, a friend to Sam and Joon as well as Benny’s love interest. Wechsler offers a fierceness to her role and I loved her scenes in the diner. My favorite part thought is the number “Dinner and a Movie.” This song is definitely the highlight of act one. 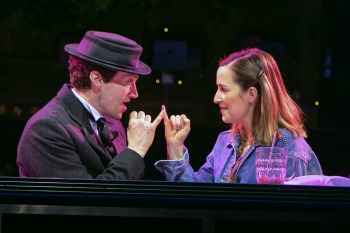 As much as I loved the show and the nostalgia it brought forth I found some of the musical numbers in act one a bit pointless and almost distracting. My biggest issue was that the first act felt a bit clunky. Most of the songs in the show were there to drive the plot forward and many of the songs were emotional and full of heart, but a few seemed to detract from this. There are songs that explain the backstories. For example, I very much appreciated Pinkham’s song, “In My Head” that gives the audience Sam’s history. Nonetheless, there are songs that are there that feel like they are filler and need some rework. One of the biggest offences of this is the song, “It’s a Shame.” The song is about Joon’s reason for her dislike of raisins. Basically, the song is about a raisin being a shriveled grape. The number did not feel like it added any further emotional connection or character building to the scene and it felt a bit out of place at this point in the show.

I would be amiss if I did not mention the artistic team for Benny & Joon. In addition to Jack Cummings III as director, Scott Rink is the Choreographer. The bright and lovely costumes are designed by Dane Laffrey. R. Lee Kennedy is the Lighting Designer and Kai Harada is the Sound Designer. Victoria Navarro is the Production Stage Manager and J. Oconer Navarro is the Music Director.

Benny & Joon runs at Paper Mill Playhouse through May 5, 2019. For more information and tickets visit their website at papermill.org or call the box office at (973)376-4343.

Final Thought: Benny & Joon: A New Musical is a fun-filled emotional journey about friendship and family. The show will affect your soul and hold 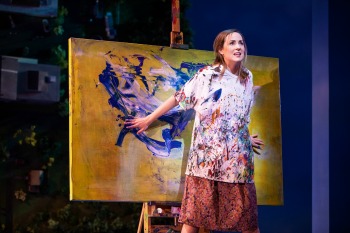 your gaze with the spectacular performances and set design. The show is a pleasing production and an entertaining night spent at the theatre.