Review: ONCE ON THIS ISLAND Shines on Broadway 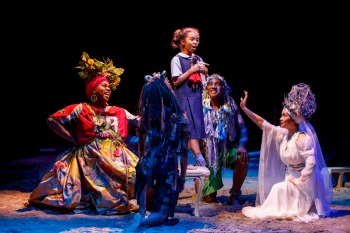 When the announcement came out several months ago that Once On This Island was being revived I was ecstatic. It was one of the shows I had never seen, but knew all the music. Also, it was announced that Michael Arden was directing this show, so I knew this was going to be a production that I did not want to miss. Furthermore, the current production of Once On This Island did not disappoint – it is beautiful and stunning, and there were moments that the show took my breath away. However, what I loved most about the show is the positivity the show inspires through the storytelling, performances and direction.

Once On This Island is an immersive experience and stands out from other shows I have seen recently. Walking into the theatre there are sights and sounds that lead you to the feel of being on an island. There are a number of incredible effects during the show that are stunning. I do not want to provide too much detail because I do not want to take away from the experience, but I will say that there are moments in the show that are breathtaking.

If you are not familiar with the story of Once On This Island it is about a young peasant girl, Ti Moune, who is bravely trying to find her place in the 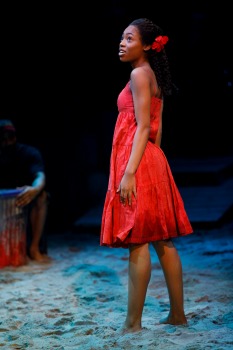 world. As she is guided by the Island gods, Ti Moune sets out on a journey to reunite with the person who has captured her heart. It is a touching story that definitely captures the heart of the audiences. In addition, the score is by Lynn Ahrens and Stephen Flaherty and the music captures the magnificence of the story told in Once On This Island.

The cast of this production is fantastic, as they are a powerful group of actors who bring this story to life. Playing Ti Moune is Hailey Kilgore. What I love about Kilgore’s performance is that she shows the determination and passion of Ti Moune. I honestly respected everything about Kilgore’s performances, she brings a freshness to the role and her rendition of “Waiting for Life” is incredible. Playing Ti Moune’s adoptive parents, Mama Euralie and Tonton Julian, are Kenita R. Miller and Phillip Boykin. These two are phenomenal in the role from the time they enter the stage and perform “One Small Girl” until the end of the show with the song “A Part of Us.” What I liked most about Miller and Boykin’s performance is the humanity they bring to their characters. They infuse the story with joy and merriment as well as heartache and anguish. It was like I felt their range of emotions throughout the show. The Island gods in the show are played by Norm Lewis, Lea Salonga, Tamyra Gray and Alex Newell.  Norm Lewis portrays, Agwe, the god of water. What I always love about seeing Lewis perform is his range of expression and ability to breathe life into any role. Each role he has played over the years is so completely different from the others, and his performance as Agwe is no exception. He is bold in this role and has a commanding presence onstage as soon as he enters. In addition, his rendition of “Rain” is dynamic, and is a performance that I am sure to remember for a long time. Lea Salonga portrays Erzulie, the god of love. Salonga is flawless in this role as she brings the essence of light and love to the stage. I have always loved the song, “The Human Heart,” seeing Salonga’s performance of this song was exquisite and brought me to tears. Playing the god of death, 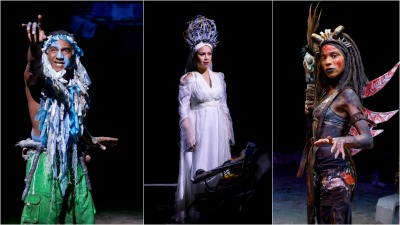 Papa Ge, is Tamyra Gray. Gray brings out the darkness of the god without making the character too frightening or bleak. Also, she is impressive in her number, “Forever Yours.” Rounding out the gods is Alex Newell who plays Asaka, Mother of the Earth.  Newell is audacious as Asaka, and definitely makes this role his own. That being said, Newell gives a vivacious performance of “Mama Will Provide.” I had a hard time not jumping to my feet to applaud after that number.  There are so many aspects and performances in this production of Once On This Island that make it an unforgettable show. However, what I keep thinking about is the passion and determination of the characters. It is such a stunning production that I feel it is a show that people will be talking about for a long time.

Do not miss this incredible production of Once On This Island at The Circle in the Square Theatre, 235 W 50th Street. For more information and tickets visit their website at www.onceonthisisland.com.

Final Thought: Once On This Island expresses the human heart on stage. The production is inventive, gorgeous and stunning to watch. Under 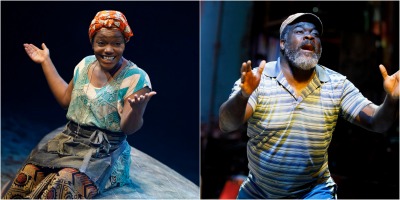 the direction of Michael Arden, this show offers a unique experience. In addition, this cast is remarkable. They each infuse their characters with life and they all give performances that are memorable and touch the heart. I highly recommend you go see this extraordinary show because you will regret missing it.