The venue where the cabaret series is held is gorgeous. As people walked into the doors of the museum they were greeted by a very friendly staff who seemed just as enthusiastic for the evening as I was. Before the event begins guests can browse the beautiful art collections. Their collection contains numerous eclectic and fascinating pieces. In addition, before the event guests can enjoy a drink on the patio and browse the museums outdoor sculpture garden. Browsing the galleries, viewing the sculptures and spending some time outside on the patio was such a great way to begin the evening.

The room where Norm Lewis performed was stunning. The night I was there was a lovely summer evening and as the audience watched Mr. Lewis perform there was a fountain behind him that danced in the amber light while the sun was setting. Witnessing Lewis provide such a passionate evening of entertainment in such a striking environment made me incredibly grateful that the Michener Art Museum is able to bring such great Broadway talent to their venue.

An aspect that made this evening so spectacular was being able to see Norm Lewis perform. One of the aspects of Mr. Lewis that makes me want to support him and his performances is his warmth of spirit and ability to make audiences feel at ease. He speaks to the audience as if they are old friends and he is simply catching up with them. Immediately, audiences react to this and sit back and relax as Lewis entertains them for an evening. In general, Lewis is an amazing performer in both his performances as part of a Broadway musical as well as in a cabaret setting. He gives an air of positivity while also being funny, charming and a great storyteller. Watching Lewis perform songs such as “What’s Going On,” “Misty” and “Music of the Night” is hypnotizing. He wears his heart on his sleeve when he performs. His selection of songs in a cabaret setting feel like they are an intensely personal choice. Lewis chose songs that told a story of himself as well as his career. Accompanying him on piano is the incredibly talented Joseph Joubert, and together they provided an evening of delightful entertainment.

Lewis created a mesmerizing evening with his cabaret. The performances I have seen of his in the past never disappoint, and the cabaret at the 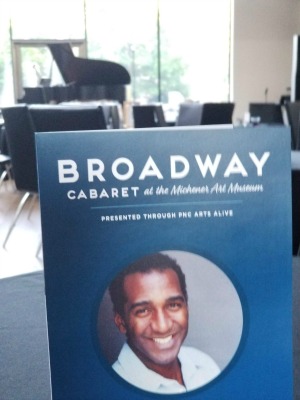 Michener Art Museum was no exception. He began the evening by performing “Once In a Lifetime,” which was beautifully done. He spoke of his love of crooners and jazz and performed “Misty,” which was a nod to the influence Johnny Mathis has played in his career. Of course, there were plenty of songs for his fans who have loved him over the years on the stages of Broadway. He sang numbers from Phantom of the Opera, Porgy and Bess, A New Brain and Les Misérables. One of the biggest highlights of the evening was hearing Lewis perform “Stars” from Les Misérables.  Lewis’ voice in this song is perfection and no one can bring out the intensity and emotion of that song like Lewis.

I am truly grateful to the Michener Art Museum and PNC Arts Alive for the Broadway Cabaret series. Bringing Broadway performers to Pennsylvania to enrich the lives of members of the community is a wonderful thing. Next up in this series is Shoshana Bean on July 12, 2018. For more information on the museum and upcoming performances please visit the website at www.michenerartmuseum.org.

For more information on Norm Lewis visit his website at www.normlewis.com.

....and he is a genuinely nice person. Wish we could have been there to see the show

It was a beautiful evening of music and laughter. Norm Lewis is an extraordinary performer whom I have had the joy of seeing on and off-Broadway for 25 years. He exudes charm and warmth off stage and is always so gracious toward his fans. I was so thrilled to meet him and actually chat for a few minutes. I loved all the songs, but my favorite was the serene "Sailing" by William Finn. Joseph Joubert is an incomparable musical director! The venue is very lovely, and this made for quite a memorable evening. It was so worth the drive from New York City.