Review: Lynn Nottage’s SWEAT at People’s Light is a Powerful and Intense Play 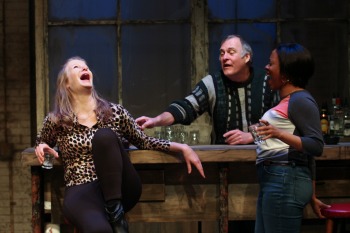 Ever since I saw Lynn Nottage’s play, Sweat, at People’s Light I keep thinking about it – the characters, the stories and the staging. I have not walked out of a play that emotionally drained since I saw Disgraced a few years ago. This play is an emotional journey and the ending is haunting. The play is set in the faltering factory town of Reading, Pennsylvania.  It focuses on the lives of mill workers in recent history during a period of mass layoffs and lock outs due to the waning of American manufacturing jobs and the undermining of labor unions. The production of Sweat at People’s Light under the direction of Elena Araoz is effective, brilliantly performed and will have audience talking and thinking about the play for days.

Sweat is a 2017 Pulitzer-Award winning play by Lynn Nottage. It exposes the collapse of the working class in the twenty-first century. This play takes place in Reading, Pennsylvania and is about a steel-tubing factory that is considering moving to Mexico and eliminating blue-collar jobs in the United States. The story focuses on a group of friends who have spent years working at the factory and addresses how the possible loss of their jobs affects them and their families. The play takes place in 2000 and 2008. Much of the play takes place in a bar where people go for drinks and camaraderie after getting off work at the mill. It evolves into a story about how changes in economic standing and stature pulls people apart and in some cases puts them in direct conflict. This is one of the most important plays I have seen in recent years. It addresses topics like the fear of losing employment, racism and what happens to a town during deindustrialization. This is a play about relatable people and topics, and it is one that depicts the social reality not often portrayed in American plays. While the play is fictional, it is based on an enormous amount of research that Nottage did in Reading, Pennsylvania. 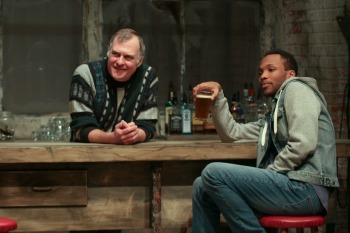 who have just been released from prison. During the first scene there is no explanation as to what has occurred to put these two young men in prison. The play is told through flashbacks to 2000 and it is eventually revealed as to what happened to Jason and Chris. As the play opens Akeem Davis’ portrayal of the parole officer is powerful. He appears calm and collected and a bit fierce in this scene even though Jason’s language and reasoning are vexatious. David Kenner gives a brilliant performance as Jason.  He makes the character insightfully layered, and does an incredible job portraying his character’s evolution from a lively young adult to someone who becomes volatile. Chris is vibrantly played by Brandon J. Pierce. Chris is determined to have a life beyond working in the factory and is saving up to go to college; Pierce breathes life into this character and makes you care about him. The bar in which much of the play takes place is tended by a former factory worker, Stan, played by William Zielinski. Zielinski anchors this production as a character who tries to give advice and understand the plight of his customers in their current working condition at the factory. Stan’s hourly employee, Oscar, is portrayed by Dakota Granados. Oscar is Latino-American and is treated like an unwelcome outsider even though he was born and raised in Reading. Granados gives an incredible performance in this role as he depicts his character’s evolution from a quite hard working busboy at the bar to revealing his full personality as someone who has long term dreams and goals of his own. A lot of the play centers on three women, Tracey (Monica Steuer), Cynthia (Lisa Strum) and Jessie (Teri Lamm) who have been working at the factory for a quarter of a century and have developed a close friendship during that time. They all meet at the bar after work and for celebrations.  Monica Steuer gives an explosive performance as Tracey. 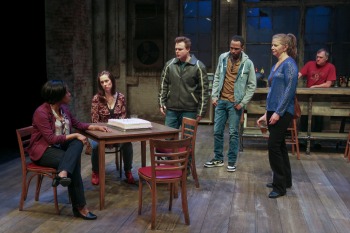 Steuer plays this character with intense force as she goes from a fiercely independent person to someone who is shattered after losing her job. Lisa Strum gives an electrifying performance as Cynthia, a woman who works hard to hold her life together and support her family. Some of the best portions of the play are the explosive battles between Tracey and Cynthia. Steuer and Strum are brilliant in these scenes, but they are heart-wrenching to watch. Lastly, Teri Lamm gives a solid performance as Jessie. Lamm’s character spends a good portion of the play being inebriated. However, I loved Lamm’s performance as she brought out the aspect of the character that is a dreamer and she is torn about the dissipating friendship between Tracey and Cynthia and how she wishes to go back to the time when all of them were friends. There are good and bad qualities to each character in the play. There are moments that that audience can understand their frustration and moments when some of the explosive scenes are cringe-worthy. However, what all actors in this show do is make their characters relatable and make the audience empathetic to their situation. Living in a time where jobs are being outsourced and living in fear because of not having enough money to cover rent or food is a reality. Sweat is an effective piece of theatre and is one that will be on my mind for a long while to come.

In addition to this incredible cast, I also need to mention the artistic team. Roman Tatarowicz designed the set. Harry Nadal serves as the costume designer. Maria-Cristina Fuste is the Lighting Designer and Nathan Leigh is the Sound Designer. The Fight Director is Paul Dennhardt and the Assistant Fight Director is Caitlyn Herzlinger. Melanie Julian is the Dialect Coach. Additionally, Gina Pisasale serves as the Dramaturg and Wendy Blackburn Eastland is the Stage Manager.

Sweat runs at People’s Light through February 17, 2019. For more information and tickets please visit their website at www.peopleslight.org or call 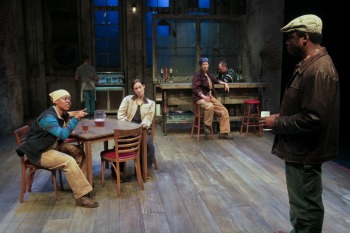 Final Thought: Sweat is a brilliant, uncompromising, and ultimately heartbreaking play. The blazing production under the direction of Elena Araoz is notable and performed by a group of incredible actors who give luminous performances.  This is one of the most effective and memorable plays I have seen recently and it is one that will be on my mind for a long time to come.