Review: HAND TO GOD at EPAC is Hilarious and Raunchy Fun 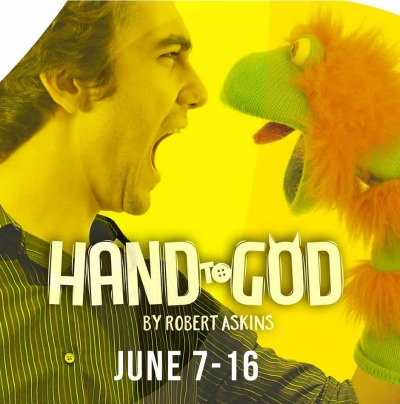 I am very grateful to live in an area in which theatre pushes the boundaries and is willing to do shows that are edgier. Ephrata Performing Arts Center did an incredible job with their production of Hand to God under the direction of Edward R. Fernandez and Bob Breen. I have to admit I have not laughed that hard in a theatre for a while. The show is a devilish dark comedy, and much of the action revolves around a puppet named Tyrone. The cast of Hand to God is exceptional as they are energetic, animated and hilarious.

Robert Askins’ play, Hand to God, is uproarious and surprisingly poignant. The show is about a group of teens who are part of a Christian ministry puppet troop that is rehearsing for an upcoming puppet show. Their rehearsal space is in the basement of a Lutheran Church in Texas. However, things take a turn when one of the puppets takes on a life of its own and it is believed the puppet is possessed by a demon. As hilarious as the play is there are also themes dealing with death, grief and teenage angst. From the able direction of Fernandez and Breen to the spot on performances of the cast to the set by Dave Koch that transports the audience to this Texas church basement, there is not a single error in this production.

Playing the role of Jason, a shy teen who is learning to express himself through his puppet Tyrone is Sean Deffley. Deffley is remarkable as he bears the part of shifting between his character’s voice and the voice of his puppet. It is incredibly entertaining to watch as he has conversations with himself in two distinct voices, one for Jason and one for Tyrone. He is animated, and his portrayal of Jason is likable and relatable. Playing Jason’s mother, Margery, is Kristie Ohlinger. Margery also runs the church’s puppet troop. Ohlinger is full of energy as this over the top character, and her scene with Deffley when they are driving home in their car is flawless. Brian Viera portrays another one of the students in the puppet club, Timothy. Viera gives a boisterous performance as a teen who is a trouble maker. Maggie Shevlin is hysterical as Jessica, who is the object of Jason’s affections. Shevlin has great comedic flair in this show. Rounding out this cast is Tim Riggs as Pastor Gregg. Riggs gives an animated performance as a pretentious and needy pastor who has a rather obvious agenda. Riggs gives an impassioned and solid performance in this role.

One word of caution I need to provide is that this show is definitely not for everyone. If you are sensitive to adult languages and situations you may want to sit this one out and wait for another one of EPAC’s productions. Hand to God contains adult themes, language and sexual situations, some including puppets.

Hand to God runs at Ephrata Performing Arts Center through June 16, 2018. For more information and tickets visit their website at www.ephrataperformingartscenter.com or call the box office at 717-733-7966.

Final Thought: Hand to God at EPAC effuses humor and the characters are sarcastic and witty. All the performances are strong, and Sean Deffley’s performance is admirable as he switches voices and personas throughout the show. Hand to God is wildly amusing and surprisingly touching, and it is wildly creative.