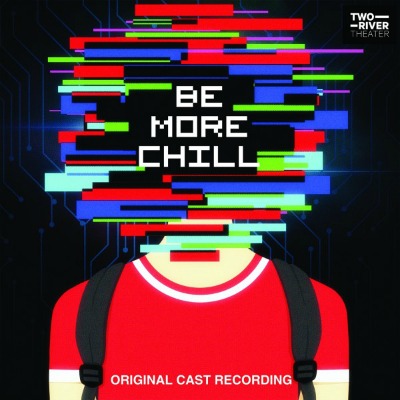 Before I begin my thoughts on this recording I just want to mention that this is the cast recording of Be More Chill from the production at Two River Theatre in Red Bank, New Jersey. The show premiered on the stage of Two River Theatre in 2015. Some members of the cast are the same as the Broadway production, but I need to mention that there are some differences in the cast. That being said this recording is different than many cast recordings in that it feels reminiscent of 1980s films and music with a sci-fi edge. I really enjoy the inventiveness of the music and lyrics as it is a musical with sci-fi influence and deals with issues that teenagers struggle with today. If you are a fan of the show, as I know many of you are, or if you want to listen to a musical that sounds and feels inspired then I would highly recommend listening to the cast recording of Be More Chill LP produced by Ghostlight Records.

A little background about the musical, Be More Chill. The show is based on the 2004 novel by Ned Vizz by the same name.  The lyrics and music are by Joe Iconis and the book is by Joe Tracz. The plot revolves around a teenager, Jeremy Heere, who is unpopular, bullied by his peers and lacking the self-confidence to think a girl he has feelings for, Christine, would ever go on a date with him. However, Rich, Jeremy’s friend tells him about “The Squip”—a tiny supercomputer that promises to bring him everything he desires most: a date with Christine and a chance to be popular with his peers. The musical asks the question is being the most popular kid in school worth the risk of swallowing the Squip?

Personally, I have not had the opportunity to see Be More Chill, but after listening to the music I am intrigued. There are a few things that fascinated me with the music. First of all, there is the creativity behind it that intrigues me. I love that there is a musical inspired by a sci-fi book and the sound of the music complements the feel of the story. The music sounds vibrant and captures the emotions of the characters in the cast. I was captured immediately by the recording with the song “More Than Survive” performed by Will Connolly (Jeremy), George Salazar (Michael) and the ensemble. The song performed by Connolly expresses that he just wants to survive the halls of his New Jersey high school. He sings, “I don’t want to be special, I just want to survive.” I also appreciated the song “Be More Chill.” The song is performed by Eric William Morris (The Squip) and Connolly (Jeremy.) The song is reminiscent of a style between “Little Shop of Horrors” and “Rocky Horror Picture Show.” The lyrics are about the Squip trying to transform Jeremy in order to make him cool. I appreciated the lyrics and I very much enjoyed the sound of the music. Another favorite from the cast recording is “The Pants Song.” The song is lively and upbeat, and it reminded me of what you would hear at the beginning of an 80s sitcom. The number is performed by Paul Whitty (Jeremy’s Dad.) The vocals are strong in this song, and it has a tune that will stick in your head for the rest of the day. There is an energy that comes across in this cast recording and it was fascinating to listen to.

I listened to the music for Be More Chill on LP. I still feel that listening to cast recordings on LP is an experience as it feels like the listener is part of the music. Through listening to the LP of the show I was able to really focus on the lyrics and music and it feels like more of a satisfying experience. I think just sitting down and listening to music and being in the moment is a relaxing experience. In addition, the LP of Be More Chill contains two vinyl records, one of act one and one for act two, unique artwork and a booklet full of liner notes and song lyrics. My favorite part of this album though is the artwork in the booklet. It has pictures from the production, but they are displayed in a way that makes it seem as if it is a graphic novel format. This in itself is worth the purchase of the LP.

The Be More Chill Cast Recording is available for purchase through Ghostlight Records. For more information and to purchase the LP please visit www.ghostlightrecords.com/be-more-chill-vinyl.html.

Final Thought: The cast recording of Be More Chill by Ghostlight Records is full of immensely clever and inspired music and lyrics. I loved listing to the LP of the songs because it transported me to the world of this musical. The music and lyrics by Joe Iconis are creative and bursting with inspiration. I am thrilled that the creative team behind the show thought to turn a sci-fi YA novel into a musical.