Before I start reviewing the music of The Jonathan Larson Project, which I am loving, I need to begin by writing about Jennifer Ashley Tepper. Tepper conceived and directed this project, which first premiered at Feinstein’s/54 below in the fall of 2018, and this recording is based on that concert. In case you have never heard the name Jennifer Tepper before I feel I need to give a little overview about her career. Personally, I became familiar with Tepper through her books, The Untold Stories of Broadway, which is a series of books about the history of individual Broadway theatres, what happens during a Broadway show, ghost stories and memories from many shows.  She is considered a “Broadway historian” because she sheds light on so many interesting things that happen in Broadway theatres including giving some historical background of the building. Some of Tepper’s additional credits include being the Producer of the off-Broadway musical hit Be More Chill, and she is the creative and programming Director at Feinstein's/54 Below. It is no surprise that she directed and conceived The Jonathan Larson Project as it celebrates Larson and includes songs from never produced musicals such as 1984 and Superbia.

The Jonathan Larson Project pays tribute to Larson who changed the landscape of musical theatre in the 1990s with the musicals tick, tick. . . BOOM! and Rent. Larson died at the age of 35, and the songs on this recording are songs that pay tribute to Larson. The songs on the recording are mostly unknown or have never been heard. The recording features Larson’s post-modern style and the songs are performed by the impressive talents of Nick Blaemire, Lauren Marcus, Andy Mientus, Krysta Rodriguez and George Salazar. The songs are full of poetic language that speak to social issues, and they have universal appeal in the meaning of life and love. I am thrilled that Ghostlight Records has released a recording of these musical gems so that Larson’s legacy may live on.

If you are a fan of the music from tick, tick. . . BOOM! and Rent you will love the music on this recording. Each song is unique while capturing the 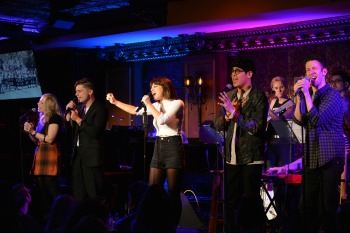 spirit and brilliance of Larson. The lyrics are powerful and each of the vocals on the recording are full of passion. As a listener I can hear how the music affected each one of the performers and it is as if they are communicating the power that Larson’s songs have over them and their career. One of the highlights on the recording of The Jonathan Larson Project is “Greene Street.” The recording begins with the song being performed by Nick Blaemire, Lauren Marcus, Andy Mientus, Krysta Rodriguez and George Salazar and there is also a bonus track at the end that is the 1983 demo sung by Larson himself. This song is an exuberant number and a wonderful way to begin the recording.  Another highlight of the recording is the song “Piano,” which is likewise performed by the entire cast. The song begins with the lyrics, “When the world is a constant jumble….piano, you save my soul again.” There is a tone of empathy that comes through in the vocals of the song and it is a beautiful piece. Another highpoint of the recording is “S.O.S.” performed by Andy Mientus. The vocals in this song are impassioned and Mientus shines in this number. The song “S.O.S.” was originally written while Larson was working on a musicalized version of 1984. However, he never obtained the rights for 1984. One last song I want to mention is the song “Hosing the Furniture” performed by Lauren Marcus and Krysta Rodriguez. The song is a satirical song about 1930s domesticity from the 1989 revue called Sitting on the Edge of the Future. The song is about a woman cleaning her all-plastic house while contemplating her own marriage. The vocals by Lauren Marcus and Krysta Rodriguez are strong and full of  energy. The song is replete with sarcasm and Marcus and Rodriguez are exceptional at infusing the song with humor. I also wanted to mention that the Music Supervision, orchestrations, and arrangements on the recording are by Charlie Rosen.

One more thing that needs mentioning – many fans of Larson or musical theatre in general cannot always get to New York for all the incredible shows, concerts, or special events that happen there. I consistently hear people mention that they are sorry they missed some of the special events like The Jonathan Larson Project. Personally, I am very grateful there is now a recording produced by Ghostlight Records of this event as well as a lasting tribute in celebration of some of Larson’s unheard songs. 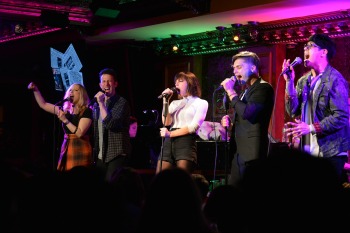 The Jonathan Larson Project is now available for streaming through Ghostlight Records. The Limited Edition CD Package is scheduled for release on June 14, 2019. To preorder the CD package or to stream the music please visit www.ghostlightrecords.com/the-jonathan-larson-project.html.

Final Thought: I am honestly thrilled that there is a recording of The Jonathan Larson Project to celebrate the musical genius of Larson. This recording by Ghostlight Records is packed with talent and there are songs that will make you laugh as well as some that will tug at the heart. What this recording does spectacularly well is remind us how Larson was able to write lyrics that have universal appeal and provide insight on life and love.