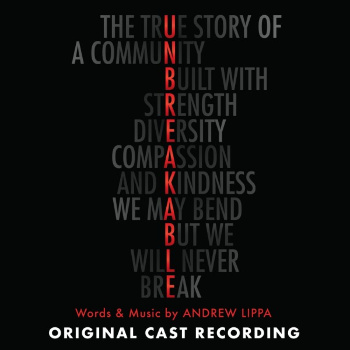 A new music recording of Andrew Lippa’s Unbreakable is currently available through Ghostlight Records. I am a big fan of Lippa and his music. Some of my favorites songs written by Lippa are “My New Philosophy” from You're a Good Man, Charlie Brown, “When You’re an Addams” from The Addams Family musical, and any of the songs from Big Fish. However, now there is a brand new recording from Andrew Lippa, Unbreakable, which is described as a musical chronology of the LGBTQ experience in America through the words and music of Lippa. Listening to the music on the new album is an emotional journey. Unbreakable truly is incredible in that the lyrics and music pull the listener in as well as educate the listener about historic and influential people and events.

For those who are not familiar with Andrew Lippa he is known for many aspects of theatre and has a vast resume and many awards including a Tony and Grammy nomination and an Emmy. He is a composer and lyricist for such shows as Big Fish, I am Harvey Milk, and The Addams Family. He also wrote three new songs for the 1999 revival of You’re a Good Man, Charlie Brown. This is just to name a few of his credits. In addition, he wrote the music and co-wrote the book for the musical, John & Jen and he wrote the music, lyrics and book for The Wild Party. With all these credits to his name it is no surprise that his new recording Unbreakable is a triumph. It is full of passion and heart and when listening to it I cannot help but classify it as a work of love. I feel this is a recording that everyone should listen to not only because of the wonderful music and vocals, but also because many of the songs are about real-life individuals such as Gertrude Stein, Lem Billings and Bayard Rustin. This is a recording in which I appreciate the music, and the message, as there are times I stopped to look up the people and events mentioned in the music that I desired to learn more about. I applaud Lippa because the Arts is not only meant to entertain, but it also should educate and Unbreakable does exactly that.

According to Lippa, Unbreakable is his “musical tribute to the LGBTQ community, how we evolved, triumphed, suffered and soared.” Lippa further explains that he drew inspiration for this recording from August Wilson and The Pittsburgh Cycle, a series of ten plays that charts the African American experience throughout the twentieth century. According to the press release, Unbreakable focuses on “a curated selection of stories throughout American LGBTQ history from 1900 through the present day. It is a heartrending and ultimately triumphant look at where we’ve been, what we’ve come through, and who we are today. Most of all, Unbreakable is a tribute to the perseverance and power of a people who would not be defeated and could not be broken.” In addition the recording was recorded live at Nourse Theater in San Francisco, California in 2018. The recording features The San Francisco Gay Men’s Chorus with soloists Britney Coleman, Marcus J. Paige, Lisa Vroman, and Andrew Lippa.

There are so many reasons I can write why I enjoyed Unbreakable and why it is important. However, before I begin I need to mention that it has been a long time since I have listened to a recording that I just sat and listened to the music in order to absorb the lyrics. There are many songs on the recording that are powerful. My favorite song on the entire recording is “Survivors.” The music is beautiful and the vocals by the San Francisco Gay Men’s Chorus are incredible. What struck me most about this song is the message of hope in the song. Given the times we currently live in, in which there seems to be so much hate, the message of this song about hope and the lyrics “We are survivors, we are the ones who stand together, hand in hand in hand” moved me. It is a wonderful message and an important one. Another highlight from the album is “The Room Next Door.” The music is lively and the vocals by Andrew Lippa and Lisa Vroman are incredible. This is one of the songs that made me stop and do research. The song is about Lem Billings who was a close and long-time friend of President John Kennedy. They met at boarding school when they were teens. This is one of the songs I closely listened to the lyrics to learn more as well as tapped my feet along with the music because of the song’s fun melody. One last song I want to write about it the song “Sylvia.” This song is about Sylvia Rivera who fought against the exclusion of transgender people and she was a loud and persistent voice. Brittney Coleman’s vocals in this number are energetic and powerful. What make this recording unique is that not only does is address LGBTQ history, but it is also full of hope. It is a reminder that even in times where we ask ourselves “when will the hate stop” Lippa reminds us in the last song of the album that “leaning acceptance takes time.”

On a personal note, my educational background is in American history. There were so many people and events mentioned in the songs on this album that I was previously unfamiliar with and this lead me to do my own personal research about these individuals and historical events. I thank Mr. Lippa for writing this music and putting an album out into the world that covers such important topics such as the Lavender Scare and LGBTQ Troops who even though they put their life on the line are still not given equal treatment.

Andrew Lippa’s Unbreakable is now available to purchase through Ghostlight Records. To purchase or stream the recording please visit ghostlightrecords.lnk.to/unbreakable.

Final Thought: Ghostlight Records recording of Andrew Lippa’s Unbreakable is moving and powerful, and it is a reminder that if we stand together as a community we are “Unbreakable.” Each song is unique in that they all discuss an important issue, person or event about American LGBTQ history. The vocals by the San Francisco Gay Men’s Chorus, Britney Coleman, Marcus J. Paige, Lisa Vroman, and Andrew Lippa are incredible. This recording is emotional and socially important and I would highly recommend taking the time to listen to these incredible songs.

Editor’s Note: In the process of editing this review I stumbled upon an article that Andrew Lippa wrote for Playbill about the recording of Unbreakable and the meaning of each song. He writes about the people and events that were an inspiration for his music. Here is the link to that article: http://www.playbill.com/article/track-by-track-breakdown-andrew-lippa-on-unbreakable.