Review: Get in the Holiday Spirit with Norm Lewis’ Cabaret - NUTCRACKER COOL at Feinstein’s/54 Below 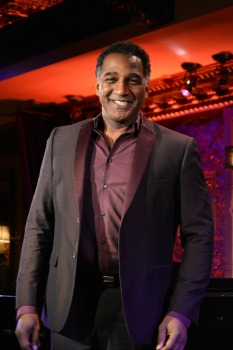 For the fourth year in a row, Norm Lewis returns to Feinstein’s/54 Below giving us a holiday cabaret perfectly suited to imbue the audience with holiday cheer. Before I continue, I want to mention that at the moment there are only a few tickets left for Lewis’ Nutcracker Cool at Feinstein’s/54 Below which runs through Saturday, December 22, 2018. So you may want to get your tickets soon as you do not want to miss this holiday gem! If you have never seen Lewis in a cabaret style venue, I would highly recommend seeing him. He is a genuinely good-natured person, his warm heartedness flows into his performance and he makes the audience feel right at home. In addition, listening to Lewis perform holiday songs is sure to instill a sense of joy and merriment in anyone attending the show.

Seeing Lewis at 54 Below has become a bit of a yuletide tradition for me. It does not feel like the holidays until I visit New York and 54 Below for this show. There is an honesty and joyfulness about Lewis that makes his cabarets delightful. As soon as he enters the room the audience knows that they are in for a night of fun. He comes out and immediately there is a sense of glee that rises from the audience. Not only does Lewis exude merriment with his performance, but he is tremendously talented and his baritone voice delights audiences. What I love about Lewis is that he has this sense of honesty and with each story he tells he has the ability to reach out into the audience, draw them into his story and transfix them with his vocals. I do not want to give too much away in writing about the music he performs. However, I will say that he does perform a number of songs from his new album, The Norm Lewis Christmas Album. His rendition of “The Little Drummer Boy” is unique and enjoyable, plus audiences gets to experience the amazing talents of Perry Cavari on drums in this number. Another 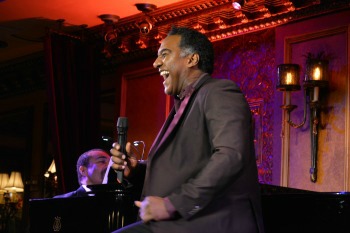 song he performs from his new album is “Home” from The Wiz. This song is filled with heart and passion and seeing him perform this in person is priceless. In addition, Lewis is accompanied by his swingin’ band which includes Musical Director, Joseph Joubert on piano, percussionist, Perry Cavari and George Farmer on bass. Nutcracker Cool is directed by Richard Jay-Alexander. One more thing I need to mention is that Lewis’ costumes during the show are amazing. Lewis’ charm, talent and warmness are what makes this show perfect for the holidays. He gives an air of positivity while also being funny, charming and a great storyteller. Watching Lewis perform throughout the evening instills the audience with hope and cheer and it is a perfect way to celebrate not only the holidays, but also the talent of Lewis. Although Lewis’ run at Feinstein’s/54 Below is only through Saturday, he does have other upcoming concerts coming up. Please visit his website, www.normlewis.com, for additional information.

There is another aspect that makes seeing Lewis at 54 Below so special and that is the venue itself. It is an intimate environment and there is not a bad seat in the house. Furthermore, they have incredible food. Executive Chef, Lynn Bound, creates an exceptional menu with seasonal ingredients. I have been to 54 Below on several occasions and have always been thrilled with the food and drinks. Also, there are some additional 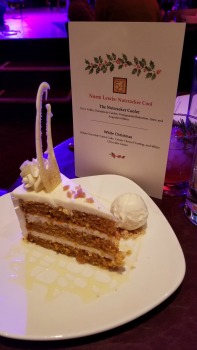 menu items on the menu during the run of Nutcracker Cool at Lewis’ request. Our table had both items, a cocktail named, “The Nutcracker Cooler,” which was delicious, and a special dessert named “White Christmas,” which is a delectable carrot cake with cream cheese frosting and a side of white chocolate gelato. I really love the idea of having themed food and cocktails to go with the performance. One more group of individuals that deserve mentioning are the wait staff and bartenders. They are some of the nicest people I have ever dealt with in this type of environment. They are attentive and friendly, and they really make sure everyone has what they need. Having friendly waiters and bartenders really assist in making an evening enjoyable, so I applaud them for everything they do during the course of the evening. Everything from the performance to the food to the environment made this an evening to remember and it captured the magic of the Holiday Season.

For additional information on 54 Below and upcoming performances please visit their website at 54below.com.

Final Thought: I would highly recommend going to see Norm Lewis at Feinstein’s/54 Below. His velvety voice will delight audiences; he gives an air of positivity while also being funny, charming and a great storyteller. Plus, having him perform at the holidays infuses audiences with merriment. Not to mention, the venue of 54 Below is such a wonderful and intimate environment that it provides for a unique and fun experience.

Photos 1 and 2 courtesy of Feinstein’s/ 54 Below. Photo Credit: Philip Romano