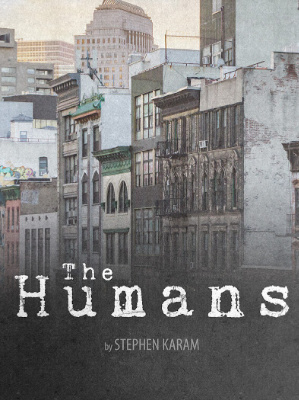 Ephrata Performing Arts Center opens its 2019 season with Stephen Karam’s play, The Humans. The play, under the direction of Bob Breen, is a family drama that will make you laugh as well as take you on an emotional ride. The production of The Humans at EPAC is well-done. The ensemble work incredibly well together and the set which portrays an underground duplex, is marvelous; it honestly made me feel as if I was inside an apartment in New York City. This is a play in which the audience is hit with waves of laughter and then struck by sadness. The Humans at EPAC offers a banquet of exceptional acting and as the play unfolds the audience will experience parts of this family unravel.

The Humans written by Stephan Karam won the Tony Award for best play in 2016. The play tells the story of the Blake family. The story takes place during a Thanksgiving dinner. Brigid Blake and her boyfriend, Richard, just moved into an apartment in Chinatown and Brigid’s parents, sister and grandmother all come for a Thanksgiving feast. Throughout the dinner, secrets are revealed, debates over religion and politics are argued and emotions run high. Personally, I loved this play and I thought EPAC did a great job with the show. It is a story that has many layers, and this particular production was able to capture a modern family experience that is both specific and universal.

This is one of the strongest ensemble pieces I have seen in a while. The entire cast gives a powerful and passionate performance. Playing the role of Brigid, a musician who is making a living as a bartender, is Julia Elberfield. Audiences can feel the pride Brigid feels in finding her new apartment through Elberfield’s performance. What I loved about her performance is her relatability in how she deals with her family and the struggle she is having finding a job as a musician. In addition, Elberfield’s responses to her family are never overemphasized and her reactions are the main portal in understanding her family’s dynamics. Playing Brigid’s older sister, Aimee, is Megan Riggs. Aimee is a lawyer in Philadelphia and she is experiencing problems at work, just broke up with her longtime girlfriend and is suffering from ulcerative colitis. Riggs is strong in her performance as she shows that even though this character laughs and jokes with her family she is struggling within. Tim Spiese and Elizabeth Pattey portray Erik and Deirdre Blake the parents of Aimee and Brigid. Spiese’s Erik is clearly struggling with past and present demons, and although audiences can see the struggle though Spiese’s performance it is evident that he clearly loves his children. Pattey is excellent as Deirdre who is constantly commentating on Brigid’s marital status and trying to cajole her daughters into going back to church. What really stood out to me during Pattey’s performance is how she is repeatedly running up and down the staircase determined to take care of what the other characters onstage are trying to avoid. This paints a picture of a mother who is unfaltering in her desire to take care of her daughters no matter what. Playing the role of Richard, Brigid’s boyfriend is Brian Viera. Viera is disconnected from much of the family drama happening around him, he is busy in the kitchen preparing food during most of the beginning scenes. However, Viera’s performance treats his character as someone who has reached an equilibrium in his life and he simply wants to be accepted by Brigid’s parents. Rounding out this cast is Kath Godwin who plays Momo, Erik’s mother, who is suffering from dementia. Godwin spends the show in a wheelchair, and she portrays a wide range of dementia induced emotional states from simply nodding off to sleep to incoherent mutterings and a screaming fit of rage. Godwin has the ability to fade into the background when not called upon and to create boisterous havoc that invokes empathy from the audience. The Humans is a poignant play as the struggles and successes of the Blakes are something that are easily relatable and realistic.

I also need to mention the Artistic Team for this show. The Humans is directed by Bob Breen. The set was designed by Douglas Frawley. Jon Leyden is the Sound Designer and Michael Wiltraut is the Lighting Designer. Carolyn Smith serves as the Costume Designer. Lastly, Michael DiSciullo is the Stage Manager.

The Humans runs at Ephrata Performing Arts Center through March 23, 2019. For more information and tickets visit their website at www.ephrataperformingartscenter.com or call the box office at 717-733-7966.

Final Thought: The Humans at Ephrata Performing Arts Center is a powerful play as it entertains through the simple portrayal of human complexity and family dynamics. This is one of the strongest ensemble plays I have seen so far this season. Each member of the cast works well together and they create a story that is relatable and realistic.