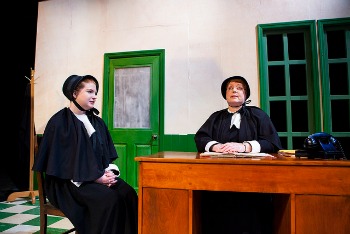 When Sister Aloysius (Susan Kresge), the principal at St. Nicholas Church School, tells Sister James (Michaela Naulty) that she saw Father Flynn (Brian Noffke) have a private meeting with Donald Mueller, St. Nicholas’ first African American student, she is alarmed. Sister Aloysius explains hers concerns with Sister James and expounds that she believes sexual misconduct occurred in this meeting with the priest and the student. This mistrust of the Father Flynn is the basis of the play, Doubt: A Parable. Ephrata Performing Arts Center, under the direction of Kenneth Seigh, is a powerful play and the cast does an incredible job at taking on these difficult roles.

Doubt: A Parable is a 2004 play by John Patrick Shanley. The play won the 2005 Pulitzer Prize for Drama and a Tony Award for Best Play. The play takes place in 1964 in the Bronx and explores two main character, Sister Aloysius and Father Flynn. Sister Aloysius has a deep mistrust of Father Flynn and she is convinced that sexual misconduct occurred between Father Flynn and the student, Donald. The facts in this play are never explicit, and the truth only exists in the minds of the audience. Father Flynn says in the opening scene, “Doubt can be a bond as powerful and sustaining as certainty." 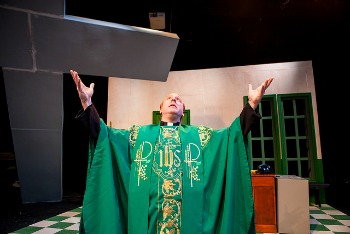 must present herself as a superior who looks at the world through a critical eye due to her life experiences, and Father Flynn must appear to be a religious man who does not directly follow Catholic doctrine. The ensemble at EPAC is exceptional and they do a wonderful job at bringing out the uprightness and eccentricities of the characters.  Susan Kresge is outstanding as Sister Aloysius. It is gripping to watch her character evolves during the show. She begins the show as an intimidating figure and the audience see her relentless struggle in her crusade against Father Flynn. Where she excels is in the bits of vulnerability that come through. I adored her performance as Sister Aloysius. Brian Noffke portrays Father Flynn as someone who believes in the principles of Catholic doctrine, and he also knows times are changing, so he comes across as willing to do what is necessary to help the students. Noffke is charismatic from the time he first appears onstage, and shifts to energetic once he and Sister Aloysius begin to have heated discussions. Michaela Naulty plays Sister James, a young and innocent nun, who does not like conflict. Naulty does a good job of depicting Sister James’s conflict in being trapped between believing Father Flynn’s good intensions and trying to appease her superior and coming to grips with her own dark suspicions. Rounding out this cast is Yolanda Dwyer as Mrs. Muller, Donald’s mother. Although Dwyer does not appear until late in the show, and she leaves the audience with a lasting impression. Dwyer brings a complexity to this role as she tries to do what is best for her son as well as protect him. The scene between Dwyer and Kresge at the end of the show is incredibly well done and audiences will see the emotional struggle Mrs. Muller endures when hearing about her son. This production of Doubt is a masterclass in storytelling as each character allows the audience to reach their own conclusions in regards to the underlying truth. 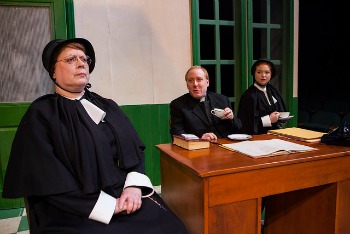 In addition to the cast of the show I also need to mention the artistic team. Jordan Janota designed the set complete with a huge ominous cross and a spartan office perfect for Sister Aloysius. Mike Wiltraut is the Lighting Designer and Albert Garcia is the Sound Designer. In addition, Jennifer Farrington designed the costumes.

Doubt: A Parable runs through September 16, 2017. For more information and tickets visit their website at www.ephrataperformingartscenter.com or call the box office at 717-733-7966.

Final Thought: EPAC’s production of Doubt: A Parable is a thought provoking play that will leave the audience with an abundance of things to think about and discuss after the show. The performances and set are incredible for this production. Doubt runs approximately ninety minutes with no intermission, and it flies by with the passion and wit of this incredible cast.