Review: DISNEY’S BEAUTY AND THE BEAST at Ephrata Performing Arts Center is Charming 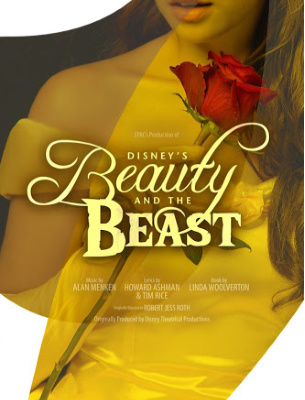 Currently onstage for the holidays at Ephrata Performing Arts Center is Disney’s Beauty and the Beast. With music by Alan Menken, lyrics by Howard Ashman and Tim Rice, and book by Linda Woolverton, this musical is adapted from the beloved 1994 Disney movie of the same name. The production at EPAC, under the direction of Robert Cooper, is ambitious and alluring and is a delightful musical for the entire family. The cast of the show is enthusiastic and they instill their joy into the audience members. The production at EPAC creates a beautiful story of love and longing, along with large musical numbers and comedy that is sure to please audience members of all ages.

Captivating is one word I would use to describe the production of Disney’s Beauty and the Beast at EPAC. This musical is a reminder to me about the power of live theatre and the magic of a show like this. The night I attended the show I had a number of young children sitting around me. As soon as the show started they were delighted by the music, but as soon as Belle appeared on the stage they were enchanted by the show. There is nothing like experiencing the power of live theatre by witnessing the introduction of children to live theatre and seeing them instilled with happiness and delight as they witness a story unfold in front of them. Disney’s Beauty and the Beast is definitely a show people of all ages will enjoy.

The entire cast is full of energy and they provide lively performances. Playing the role of Belle is Amanda Holsinger. Holsinger infuses individuality and innocence into her character. The audience is immediately drawn to Belle as she is a warm presence on stage and is instantly likable. She is strong vocally, and one of my favorite songs was her vocals in the song, “Belle.” Ryan Morgan portrays the Beast in this production. Morgan is seamlessly abrasive in the show, which is exactly how he should be. He is convincingly beastly without being frightening. Morgan and Holsinger work really well together, especially in the beginning scenes when he is trying to work on being kinder to Belle. One of my favorite performances of the show is from Kevin Lambert who plays Maurice, Belle’s father. Lambert is wonderfully eccentric in this role as the inventor. In addition, his song, “No Matter What,” was emotional and beautifully done. Playing the role of Cogsworth and Lumiere are Barry Ciabattoni and Sean Deffley. Both these actors give animated performances and play well off each other. Donna Schilke portrays Mrs. Potts. Schilke gives an air of optimism in this role. Playing her son, Chip, is Nahla Samuel. Samuel is full of spunk when she first appears onstage and delightful to watch throughout the show. Lastly, I need to mention the antagonist of the show, Gaston, splendidly played by Brad DeLeone. DeLeone portrays his role with an air of narcissism, and the number “Gaston,” an ode to himself, is well performed.

Disney’s Beauty and the Beast is an ambitious show, there are many technical aspects that need to be done correctly, and if they are not some of the scenes do not work. For instance, the opening number of the show worked for me in the way the witch appears and disappears in the beginning scene. In addition, I appreciated the creative use of scenery regarding the way in which the book store in the village turns around to reveal books on shelves. I really loved the detail and thought that went into that particular scene. However, some scenes, such as “The Mob Song” just did not work. I am not sure if the night attended was plagued by missed cues or if it was the way the director intended, but there was a lack of attacking villagers present in the castle fight scene. For instance, Hearing Chip yell “charge” and not seeing Chip, Mrs. Potts or any villagers on the stage made the scene feel muddled and the audience was not quite sure what was happening in that moment. That being said, Disney’s Beauty and the Beast is a huge show and everyone on the stage puts all their energy into their performance. There is something to be said for an enthusiastic and talented cast because I left the theatre feeling more joyful than I had all week. That is exactly how one should feel when leaving the theatre after a show like this. For two and a half hours I left all my concerns outside the theatre and had no mobile technology to distract me. It was simply nice to take a break from reality and be entertained by the production of Disney’s Beauty and the Beast at EPAC.

Disney’s Beauty and the Beast runs at EPAC through December 22, 2018. For more information and tickets visit their website at www.ephrataperformingartscenter.com or call the box office at 717-733-7966.

Final Thought: Disney’s Beauty and the Beast is a delightful musical that the entire family will enjoy. The production at Ephrata Performing Arts Center creates a beautiful story of love and longing, along with large musical numbers and an enthusiastic and jubilant cast. At it’s heart the musical is a touching show and it is “a tale as old as time.”