Review: Cape and Sword Drama Society Strikes Up an Exceptional THE MUSIC MAN 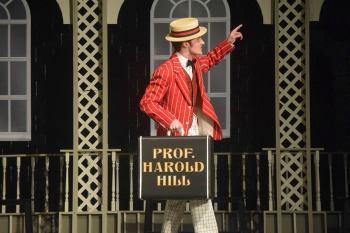 The production of The Music Man by the Cape and Sword Drama Society is incredible. They have taken a classic musical and made it fresh and new. The traditional story is there, and all the beloved music, however, they have added new details with staging and color, and I will never see this musical the same way again. It is one of those rare occurrences where I thought I knew what to expect, I have seen The Music Man many times, and as much as I love the show, most productions are similar. That being said, director, Tony Braithwaite, along with the entire cast and crew have infused this show with new life and this production of The Music Man is stunning.

The Music Man originally opened on Broadway in 1957. Meredith Wilson wrote the music, book and lyrics for this show, and it is based on a story by Wilson and Franklin Lacey. The Music Man tells the story of Harold Hill, a fairly unscrupulous salesman who lands in River City, Iowa, and tries to con the townsfolk into believing that he is a boys’ band organizer/leader. Hill sells band instruments, music books, and uniforms to the naive residents, but plans to skip town with their money prior to giving any music lessons. The show won five Tony Awards including best musical, and won a Grammy for Best Original Cast Album. This production of The Music Man marks the third time the Prep has done the show. This particular production differs due to the inspiration Braithwaite received from the production presented at the Oregon Shakespeare Festival, and it incorporates a novel use of color throughout the show. The show begins in muted colors, shades of white and grey, and as the show progresses different colors appear as Hill brings about changes in the attitudes of those living in the town. The way this show evolves with the splashes of color is reminiscent of The Wizard of Oz. Personally, I loved the way this show changes, and it left me with a renewed enthusiasm for The Music Man.

The entire cast is strong in this production of The Music Man. Jay Fogarty plays Prof. Harold Hill. Fogarty is full of flair and charm, and as soon 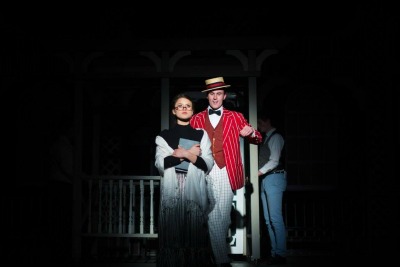 as he appears on stage he is immediately likable. Elena Christen portrays Marian Paroo, the town librarian. Christen gives Marian a sense of independence and she is strong willed. In addition, both Fogarty and Christen do an incredible job at showing the progression of the relationship between Hill and Marian. Their duet, “Till There was You” is strong and heart-felt. Playing Marian’s mother, Mrs. Paroo, is Claire Montgomery. Montgomery infuses her character with a good dose of Irish charm. Marian’s little brother, Winthrop is portrayed by William Kriz. Kriz is a delightful young actor who is sure to make the audience smile. Paul Koenig portrays Marcellus Washburn, Harold Hill’s sidekick. What Koenig has done with this role is take a character who often times is forgotten and makes him a memorable character.  Koenig is animated and full of energy. In addition, he is fantastic in “Shipoopi.” Playing the roles of Mayor Shinn and his wife, Eulalie are Mac Riga and Michaela Zammuto.  Both give fine performances, and they have the audience laughing with their antics throughout the show. Playing the mayor’s daughter, Zaneeta, is Katherine Christen. Tommy Djilas, the town prankster, is played by James DiCocco.  Christen and James DiCocco together play two youngsters who are passionate about life and one another. In addition, they both bring strong dancing skills to their roles. Liam Scott, Matt Phillips, Joe Scott and Jack Thorell make up the Barbershop Quartet.  This quartet provides wonderful harmonies in “Sincere” and “Lida Rose.” Alex Segreti portrays Amaryllis, a young piano student of Marian’s, and Segreti brings out Amaryllis’s determination and desire to have Winthrop be her friend. Lastly, Taron Hampton plays Charlie Cowell, an anvil salesman who wants to prevent Harold Hill from continuing his 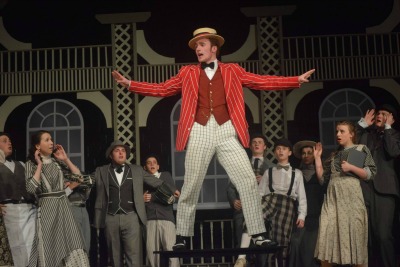 scheme. Hampton is a strong presence onstage, and he does well in this “villainous” role. As much as I have praised many of the main characters, the Townspeople and the Ensemble also deserve praise because without them this would not be as successful a show as it is. The following people play Townspeople: Jacob Orbell, Jillian Zupito, Lindsey Farrell, Maddy Larkin, Ava Hamm, Plum Riga and Liam Grugan. Members of the Ensemble are: Brian Jones, Jordan Busza, Scott Hibbs, David McCabe, Justin Kearns, Coling McHale, Moira Garvey, Gabrielle Bass, Sam Halfpenny, John Fioravanti, Nick Mattera, Vincent Giletto, Jason Mattera, Scott Yezzi and Grace Young.  Two of the best numbers of the show, “76 Trombones” and “Shipoopi” are successful due largely to the combined talents of all these people and they put an incredible amount of energy forth in these numbers. In all honesty, not only are those two numbers my favorite in this particular production, but the most enjoyable I have seen in any production of The Music Man. I also need to mention the talented Sonny Leo who choreographed both of these numbers.

The Cape and Sword would not be as successful as it is without the guidance of Tony Braithwaite. His vision for the shows that this talented group perform is fresh and new, and he is able to instill the shows and the performers with enthusiasm and energy. I have been seeing shows at St. Joseph Prep for the past few years, and with each new show I am amazed at the amount of detail and proficiency that go into these shows. I truly enjoy coming to Philadelphia to experience the shows presented by the Cape and Sword Drama Society. In addition, Braithwaite is assisted by his team of adept assistant directors: Howie Brown, Kevin Ryan and Andrew Staub.

It takes a large number of people to help build a production of this magnitude, and I need to applaud the people behind the scenes who all 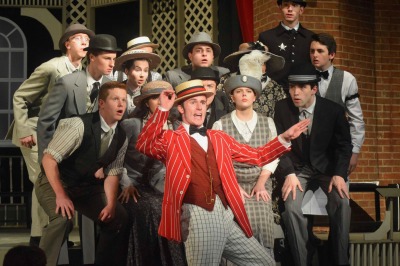 assisted in making this show a success. Sonny Leo is responsible for the spectacular choreography and Musical Direction. Jen Lancaster designed the beautiful and colorful costumes. The Stage and Lighting Manager is Dan Avington, and the Sound Manager is Andrew Imredy. The beautifully detailed set was designed by Joe Binck, and built by the masterful stage crew.

The Music Man runs at Saint Joseph’s Prep through May 21, 2017. For more information and tickets visit their website at www.sjprep.org.

Final Thought: Cape and Sword Drama Society’s production of The Music Man is an exceptional production from the wonderful cast to the magnificently executed numbers. The cast and crew do an amazing job bringing this classic musical to life with some new twists. It gives audiences a new way to experience The Music Man, and for me, I cannot stop telling others about this unique and creative production!