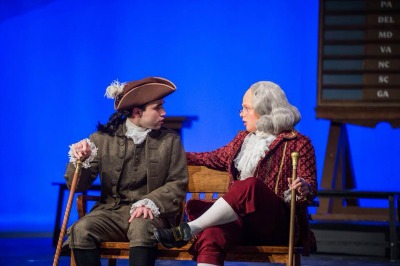 1776 is a show that influenced my life at a young age and is one of the reasons I fell in love with the depicted historical period as well as the musical. However, I have seen this musical many times and I have found that directors tend to either miss the humor in the show and take every line with its literal meaning or portray the characters as vapid caricatures of the actual historical figures. The misunderstanding of 1776 is what can make some productions of the show seem boring and uninspired. However, the production of 1776 by the Cape and Sword Drama Society is incredibly well done. Every line is delivered with precision and it seems that there was a lot of historical research done by every person on the stage and behind the scenes to capture the importance of making a decision about American independence in the 18th century. 1776 at Saint Joseph’s Prep is an excellent production of this fine musical.  The show seems fresh and relevant through the excellent direction of Tony Braithwaite and the outstanding performances by the entire cast.

1776 premiered on Broadway in 1969, and is a musical with music and lyrics by Sherman Edwards and a book by Peter Stone. It tells the story of the events, mainly within the continental congress, leading up to the signing of the Declaration of Independence. Although there are a number of liberties taken regarding the historical facts of the events, the musical does paint the general picture of events, and shows that the relationship between the American colonies and the British Crown were strained, and that edicts from Britain, including the Tea Act and Stamp Act, led to incidents of rebellion in the Colonies. 1776 also brings forth the point that it took many hours of debate and compromise to reach a consensus through which the members of the Continental Congress agreed to and signed the actual Declaration. Cape and Sword’s production of 1776 is entertaining, humorous and enlightening and it is also a reminder why this musical is important.

In all honesty, I truly love this production of 1776, this cast, set and costumes all hit the mark with period appropriateness and yet it also in its own 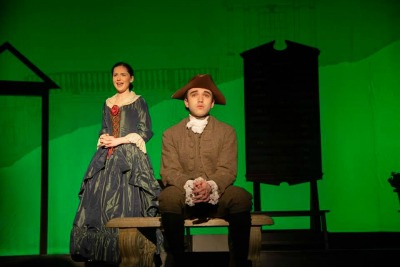 way speaks to current events. Every single person involved in this show deserves applause. Playing the role of John Adams is Matt Philips, and he is incredible in this role. He brings out not only Adams’s passion, but also his conviction. He begins the show strong with “Piddle, Twiddle and Resolve” and ends with an emotional “Is Anybody There?” Maddy Larkin plays Abigail Adams. She does an exceptional job not only with her vocals, but how she captures Abigail Adams’s strength, intelligence and wit. The dialogue between Philips and Larkin is good, and they both have great chemistry on stage. Their portrayal of these characters brought out how the relationship of Abagail and John was full of determination and strength. Paul Koenig shines as Dr. Benjamin Franklin. Franklin is a character that has to be diplomatic and likable, and Koenig achieves this. Also, he adds a lot of humor to the show, particularly with his performance in “The Lees of Old Virginia” and “The Egg.” Portraying Thomas Jefferson is Stephen Dierkes. Dierkes does quite well at giving Jefferson a quiet sobriety that is necessary to exemplify his intelligence. In addition, he is excellent in the song, “But Mr. Adams.” Playing Martha Jefferson is Katherine Christen. Christen adds Southern flair to Martha, and has great vocals and personality in the song, “He Plays the Violin.” John Fioravanti portrays Richard Henry Lee, a prominent delegate from Virginia. Fioravanti gives an energetic performance as he illustrates this larger than life character, and he is full of appropriate enthusiasm in his number, “The Lees of Old Virginia.” Another exceptional performance is by James DiCocco who plays South Carolina Delegate, Edward Rutledge. This is one of the more difficult roles in the show as he must sing “Molasses to Rum,” which is one of the more powerful songs in the show as it emphasizes the economic benefits the North receives in this time period from the slave trade even though they morally oppose it. DiCocco’s rendition of this song was chill-inducing and powerful. Another stand out song in this show was “Cool, Cool Considerate Men.” Jay Fogarty 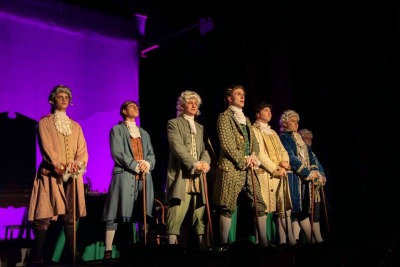 portrays John Dickinson, one of the Pennsylvania delegates. Fogarty gives an impassioned performance as the delegate who resists any break with the King. Additionally, “Cool, Cool, Considerate Men” is a magnificent number with both the vocals and choreography. Fogarty leads this song with fervor. This song is additionally performed by “the Conservatives” who are initially opposed to American independence. The cast members who play “the Conservatives” are: David Haddad (Dr. Lyman Hall), James DiCocco (Edward Rutledge), Jeffrey Russell (George Read), Scott Hibbs (Lewis Morris), Joe Matthews (Robert Livingston), Colin McHale (Joseph Hewes) and Sam Halfpenny (Judge James Wilson).

The rest of this large cast all do an exceptionally well in their respective roles. David McCabe is all business as Andrew McNair, the Congressional custodian. Joe Scott is amusing as the Rhode Island delegate who is constantly pursuing his next tankard of rum. Michael Taimanglo is impressive as the observant and clever John Hancock. Two of the delegates from Delaware, Col. Thomas McKean and Caesar Rodney are portrayed by Jacob Orbell and Liam Grugan. These two worked well together onstage as their camaraderie came through in their performances.  Additional memorable performances are from: Jack Thorell (Charles Thomson), Paul Christian Stowell (Dr. Josiah Bartlett), Nick Mattera (Roger Sherman), Daniel Avington (Samuel Chase), Scott Yezzi (Rev. John Witherspoon), Jason Mattera (Richard Stockton) and Luc Elamri (A Painter.) Lastly, I want to mention a moving and emotional song, “Mamma, Look Sharp.” Justin Kearns (Courier), Matthew McCarney (Leather Apron) and David McCabe (Andrew McNair) give heart wrenching and haunting performances in this song. 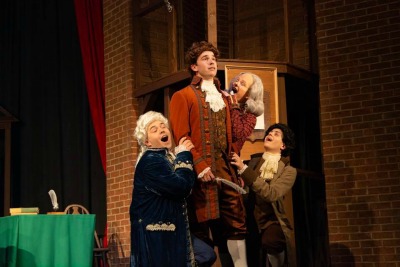 between. It takes the cast, crew and everyone involved to make a show like this a success.  The work of every member of this show is evident in the production. The creative set design of Independence Hall was built by Brendan Kolon and the stage crew. Sonny Leo is the music director and choreographer. The detailed and period appropriate costumes were designed by Jen Lancaster. The Stage Manager is Plum Riga. The Lighting Manager is Ian Balaratna and the Sound Manager is Chip Gallagher. In addition director Tony Braithwaite is assisted by Kevin Ryan.

One last thing I want to write about in regards to not only 1776, but about the productions I have seen over the years by Cape and Sword. Each time I see a show I will usually write about Tony Braithwaite’s knowledge and respect for each show he directs, and in general, I have loved everything I have seen at St. Joseph’s Prep. I have great respect and admiration for Braithwaite in what he achieves with every show he is involved in. This is one of the best productions of 1776 I have seen onstage. It was infused with a level of knowledge and enthusiasm that does not usually come through in this show. There were elements of humor, passion and cleverness in this production. I congratulate Braithwaite for his direction of this show.

The run of 1776 ended last weekend at St. Joseph’s Prep. However, for more information about their upcoming shows please visit their website at www.sjprep.org.