Review: BLACKBIRD at the Fulton Theatre is an Emotional Journey

Live theatre serves many purposes such as escapism, having a collective experience or helping to teach empathy. I could make a list that goes on and on about the importance of live theatre. That being said it is a rarity when I see a play that takes me on such an emotional journey that I am still affected by it days later. The production of Blackbird at the Fulton Theatre is absolutely brilliant. I applaud the Fulton Theatre for adding this difficult play to their season. Director Matt Pfeiffer has created a theatrical masterpiece with his stage direction. Jeffrey Coon and Kate Fahrner give powerful performances in this production. This is a show that takes the audience on a heart-wrenching and emotional journey, and the production of Blackbird at the Fulton Theatre is a memorable one.

Blackbird is a play written by Scottish playwright David Harrower. It is a story about a young woman, Una, confronting a man, Ray, who sexually abused her when she was twelve. The play takes plays fifteen years after the incident. The play is explosive and it is a show that is necessary, and it will fill the audience with a wave of emotions. That being said, the production of Blackbird at the Fulton is well done thanks to the direction of Pfeiffer and the extraordinary casting of Jeffrey Coon and Kate Fahrner in the lead roles.

The cast for this show pour all their emotional energy into their performances, which makes this one of the best shows I have seen at the Fulton this year. Jeffrey Coon is passionate and animated as Ray. He provides one of the more emotional performances I have seen him deliver over the years. Kate Fahrner is raw and angry as Una. Every emotion comes flying at the audience in quick precision, and all the anger I was feeling due to the nature of the story she expressed deftly. I cannot say enough positive things about the performances by Coon and Fahrner.

I wanted to make a note about the nature of the play Blackbird. It is an intensely emotional show and coming out of the theatre I personally felt 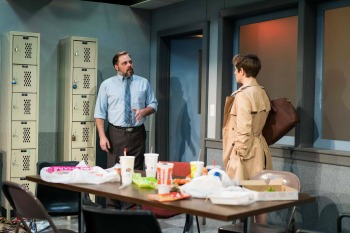 exhausted. If you are sensitive to topics such as sexual abuse this is definitely one that is difficult to get through. Also, the Fulton recognizes this and after each performance trained sexual assault counselors from the YWCA of Lancaster’s Sexual Assault & Prevention Counseling Center will conduct a talk back to assist audience members in processing the themes of the play. All this being said, I applaud the Fulton for producing Blackbird which is definitely an emotionally exhausting, but important play. It is a reminder how live theatre is an important tool to help us as a society learn and remind us that not everything is as black and white as it seems.

Blackbird runs at the Fulton Theatre through April 22, 2018. For more information and tickets visit their website at www.thefulton.org or call the box office at 717-397-7425.