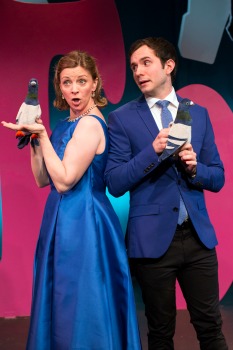 Currently onstage at Act II Playhouse is the revue show, TOMFOOLERY. This show is full of satirical songs mostly from the 1950s and 60s by Tom Lehrer. Lehrer is an American songwriter, satirist, mathematician and Harvard alumnus. With the talented Tony Braithwaite at the helm of this production, it is a wonderful way to sit back and laugh at the satire of Lehrer’s songs. TOMFOOLERY at Act II Playhouse is a celebration of Lehrer’s music and the cast will delight and entertain audiences.

This particular production of TOMFOOLERY shines at Act II Playhouse due to director, Tony Braithwaite’s treatment of the show. Where some of the musical numbers and lyrics can seem outdated, the show is treated as a history lesson based on the importance of Tom Lehrer and his music. In addition, the show is handled as if it is a period piece. The costumes and set all are reminiscent of the 1950s and 60s, and take the audience on a journey back in time with the music of Lehrer. Also, throughout the show there is commentary about the songs and about Lehrer and his lyrics, which I found interesting. The spirited cast makes TOMFOOLERY an entertaining evening of theatre.

Where TOMFOOLERY thrives is the way in which the cast offers perspective and anecdotes about Lehrer and his music. It is done by the cast in a way that is insightful as well as entertaining, and it will evoke nostalgia for some members of the audience. Personally, I was surprised to find that Lehrer wrote some music for THE ELECTRIC COMPANY, and the show left me wanting to go home and listen to more of Lehrer’s music and find out more about his life. Braithwaite, as always, is full of energy and captivating, and gives a strong performance throughout the production. He provides an animated performance in the song, “L-Y.” Tracie Higgins entertains audiences throughout the show, and she is hysterical in the song, “Smut.” In addition, her duet with Patrick Romano, “Poisoning Pigeons in the Park,” is humorous and enchanting. Rounding out this lively cast is Jamison Foreman who also serves as the pianist. Foreman is excellent and full of energy in the song, “New Math.” In this number he is reminiscent of the character Harold Hill from THE MUSIC MAN, and the audience loved this particular number the night I attended the show. There is an energy that exudes from this entire cast throughout the show. As much as I enjoyed every 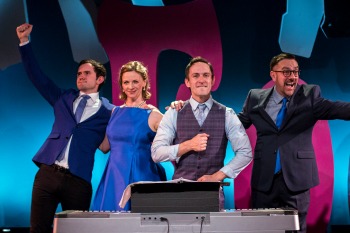 single song, one of the highlights of the show is “Vatican Rag,” with choreography by Sonny Leo.  The cast seems to be having a grand time in this show, and their enthusiasm radiates to the audience.

The set, designed by Parris Bradley, is fitting for this show with large letters that spell out “Tomfoolery.” The costumes that appear to come right out of a 1950s variety show are designed by Jillian Keys. James Leitner is the Lighting Designer and John Stovicek is the Sound Designer.

TOMFOOLERY runs at Act II Playhouse through April 2, 2017. For more information and tickets visit their website at www.act2.org or call the box office at 215-654-0200.