Review: 42nd Street at the Fulton Theatre is a Lavish Production Full of Dazzling Choreography 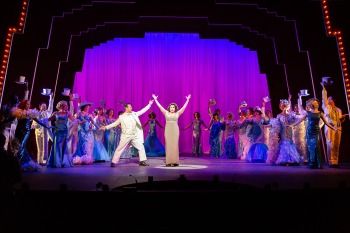 Currently onstage at the Fulton Theatre is the musical, 42nd Street under the direction of Marc Robin. It is a spectacular production filled with brilliant choreography, dazzling costumes and an outstanding cast. The show begins in 1930s NYC and is a love letter to Broadway. If you love “classic” musicals with big dance numbers then this is definitely a show that you do not want to miss. It is a feel-good musical, and for me, the star of the show was the choreography and lavish costumes. The costumes for this production were some of the best I have seen on stage at the Fulton. Additionally, the cast is incredible, everyone is full of enthusiasm and energy on the stage. 42nd Street at the Fulton Theatre is the perfect show for the holiday season as it lets the audience leave their worries at the door and infuses them with joy as they watch the toe-tapping and lively production.

There is a charm about 42nd Street largely due to that it sparkles with brilliantly choreographed routines. The musical is based on the 1932 novel 42nd Street by Bradford Ropes and the subsequent movie-musical adaptation from 1933. The plot of the show revolves around a young woman, Peggy Sawyer, who comes to New York City to pursue her dream of performing on a stage on Broadway. Initially she is passed over and ignored, but then gets her chance to star in a new musical. The production is all about the dancing spectacle and the Fulton delivers this well. It will be difficult for the members of the Fulton audience to keep from tapping their feet by the end of the show.

The cast of 42nd Street is remarkable. Playing the role of Peggy Sawyer is Sarah Quinn Taylor. Taylor is incredible as the ingénue, and she is an 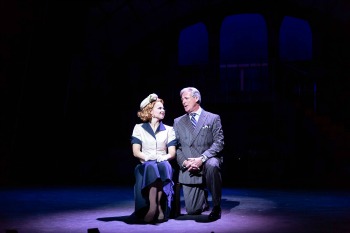 incredible dancer. There is a genuineness about her and she charms the audience.  Playing Dorothy Brock, the leading dame of a new musical, is Denise Whelan. Whelan gives a force of nature performance that is delightful to watch. No one can emote lyrics better than Whelan which makes her perfect for this role. This is evident in her performance in the song, “I Know Now.” Playing Julian Marsh, the director of the new show, is Tom Galantich. Galantich has a powerful presence onstage and his scenes with both Taylor and Whelan are strong and charismatic.  These three actors are a pleasure to watch in their roles.

As much as I loved the principal cast members in this show, I really need to talk about the ensemble. This show is made up mostly of large dance numbers and without a really strong and energetic ensemble this show would fall flat. This ensemble is full of energetic and vibrant performers who make this show a success, and the number, “We’re in the Money” is worth the price of admission. The members of the ensemble are:  Brandon Ambrosino, Michael Bingham, Kelly Liz Bolick, Grace Browning, Aubrey Cheek, Alec Cohen, Alex Drost, Carissa Gaughran, Will Geoghegan, Jorge Guerra, Tyler Johnson-Campion, Rebecca Rene Kelly, Ryan Lambert, Stevie Ann Mack, Kelcey Matheny, Alex Hayden Miller, Austin Nedrow, Heather Nolting, Kwasi Perry, Allie Pizzo, Dea'Shinique Ramsey , Cora Silburt, Jackson Siegel, 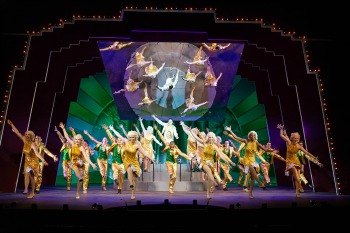 Katie Sina, Edward Tolve and Lindsey Weissinger. This is a phenomenal group of people who infuse the audience with their energy and joy. They are a delight to watch onstage.

I also need to mention the artistic team.  Director and Choreographer is Marc Robin. Ryan J. Moller designed the dazzling costumes. Bruce Brockman is the Scenic Designer, Paul Black is the Lighting Designer and Jacob Mishler is the Sound Designer, John Lefever is the Music Director.

42nd Street runs at the Fulton Theatre through December 30, 2018. For more information and tickets please visit their website at www.thefulton.org or call the box office at 717-397-7425.

Final Thought: 42nd Street at the Fulton Theatre is a lively production of a 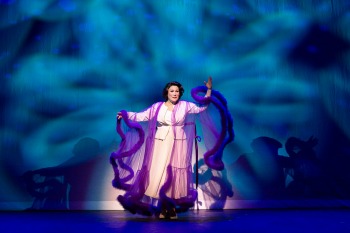 classic musical that will leave audiences with a smile on their face and a spring in their step.  The show is full of great performances, energetic tap numbers and dazzling costumes. It is a feel-good musical that is perfect for the holiday season.