Reading Theater Project’s MAY BE HONEST is Full of Fervor

The Reading Theater Project has been excited for months about an original play they are creating about the story of Susanna Cox. For those not familiar with Susanna Cox, she was a 19th century woman and she was the last woman to be hung publicly in Berks County. Cox was a domestic servant, and she was accused of murdering her infant son. Her story has become a bit of a legend and for those interested in the facts regarding her trial it has become somewhat of a mystery due to key court records that have simply gone missing. Her story gained sympathy in the 19th century, and was composed into a ballad that was circulated on broadsides throughout the century.  Reading Theater Project’s production of May Be Honest is riveting and should not be missed.

As audiences walk into the theatre the set and art in the room remind audiences about the history surrounding the show. There are many lanterns hanging from the ceiling to transport audiences back to the 19th century. In addition, the artwork around the room symbolizes the rich Pennsylvania-German heritage of Berks County and the heritage of Susanna Cox and the family she worked for. Both the lanterns and the artwork serve to add to the story of Susanna Cox, and I greatly appreciated both of these items. 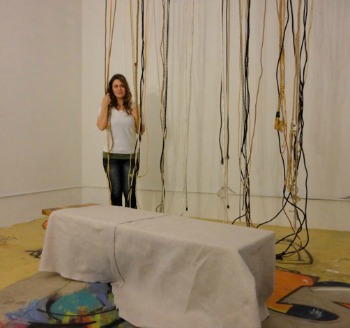 The passionate cast of May Be Honest are engaging in the telling of the powerful story of Susanna Cox and the circumstances that led to her hanging. Portraying the role of Susanna Cox in this play is Katie Urich. Urich is striking in this role, and her portrayal shows the shock that Susanna must have experienced. Vicki Graff serves as the narrator who sings stanzas of “The Ballad of Susanna Cox” throughout the show. The ballad helps narrate the story, and Graff sings this ballad beautifully. Sean Matthew O’Neill plays multiple roles throughout the show, and they all are men who testified about Susanna during her trial: the man she worked for, Jacob Gehr, a Justice of the Peace, and the doctor of the family she worked for, Dr. John C. Baum. He successfully portrays these roles throughout the play, and each one has a different accent and costume, which makes it easier for the audience to distinguish between the roles. The role of the attorneys, for both the prosecution and defense, are played by Aaron Rineer. Rineer is compelling in both roles. In the role of the attorney for the prosecution he utters, “men are capable of telling her story,” which helps the audience understand the role of women in the 19th century. Amy Shea plays Esther Gehr, the woman who Susanna works for. Shea shows the frailty of Esther, as well as her emotional side. Rounding out this cast is Joel Lesher who plays the minister. Lesher is powerful in the role as the fire and brimstone preacher, and brings forth an anxiety-ridden sermon about the sins of Susanna Cox. The whole cast of May Be Honest is phenomenal, and are passionate about this show. Do not miss this amazing production that tells the story of Susanna Cox, and how her story still has relevance in the 21st century.

May Be Honest is written by Vicki Graff with Kim Mccaul Armer, Adam Kissinger, and Sue Lange. Joel Gori serves as the director. In addition, Amy Shea is the costume designer.

The Reading Theater Project’s production of May Be Honest runs through August 11, 2013 at the T.E.A. Factory. For more information and tickets visit them online at readingtheaterproject.com.