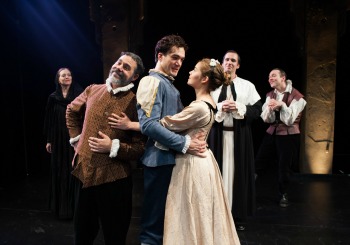 In the opening dialogue the audience is told, “You are about to see something strange.” After that opening, Machiavelli’s play, The Mandrake begins. It is a story that can be seen as strange, but it is also a show that is humorous and captivating.  Quintessence Theatre produces an outstanding production of The Mandrake, and it is complete with energetic and dynamic performances that will amuse audiences.

The Mandrake is a play by Italian philosopher Niccolò Machiavelli. Records indicate the Machiavelli wrote the Mandrake in 1518, and it was first performed during the carnival season of 1526. The production that is currently being done at Quintessence Theatre is a translated version by Wallace Shawn from 1977. However, according to the notes in the playbill by director, Alexander Burns, “What is most amazing about The Mandrake, is that what will delight, provoke and offend you is Machiavelli’s original, not Wallace’s translation.” It is amazing that a play that was written in the 16th century still entertains and amuses audiences today. The Mandrake tells the tale of Callimaco, a young man who is infatuated with Lucrezia, a woman he feels is the most beautiful woman in the world. Unfortunately for Callimaco, Lucrezia is married to Nicia, an older and gullible man. With the help of Ligurio, Callimaco conspires to create a ruse in order to win Lucrezia for himself, he actually plans to steal Lucrezia. What ensues is a play that can be seen as peculiar, but it truly is humorous and wonderfully entertaining.

Director, Alexander Burns, explained that The Mandrake is the second part of the “love and lust” rotating repertory. I found that this play moved 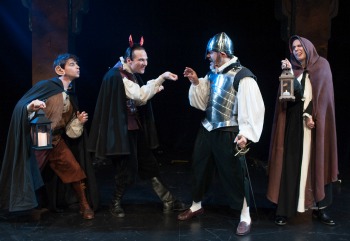 very quickly, and it was full of wit as this cast energetically moved the story along. Playing Callimaco, the young man who falls in love with Lucrezia is Alan Brinks. Brinks is animated and full of life, as he goes on a quest to win the beautiful Lucrezia for himself. I thought Brinks brought lots of liveliness and spirit to this role, and he leers and spouts his character’s nonsense brilliantly.  Josh Carpenter plays the cunning Ligurio, who assists in Callimaco’s scheme to win Lucrezia. Carpenter is perfectly sly as he glides around the stage, and draws the audience into the thickening plot; Carpenter is a pleasure to watch. Sean Close plays Brother Timothy, who joins in the conspiracy for the promise of a sizable endowment. Close gives the essence of a scoundrel to this role, and convinces the audience that corruption in the church during Machiavelli’s time was common. Gregory Isaac portrays Nicia, the rich and credulous miser, who is married to Lucrezia. Isaac is uncanny in this role, and he adds to the humor by playing a perfectly convincing stooge in this show. Rounding out this cast is Emiley Kiser as the virtuous Lucrezia. Kiser does a wonderful job at the beginning of this play portraying the virtuous ingénue, and eventually overturns the rules of conventional morality. 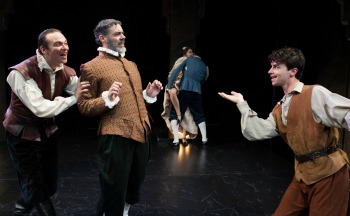 The Mandrake runs at Quintessence Theatre through November 8, 2015. For more information and tickets visit their website at www.quintessencetheatre.org or call their box office at 215-987-4450.

Final Thought: The Mandrake at Quintessence Theatre is an energetic and humorous play that will amuse audiences. I appreciate how Quintessence continues to create works from classic literature and drama for the stage, and makes it feel fresh. The Mandrake is a show that is wonderfully entertaining.