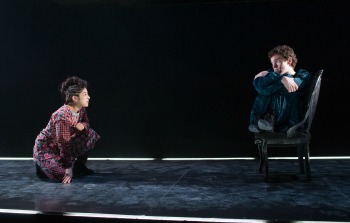 Anyone concerned that a play about Joan of Arc may not be their cup of tea will need to reconsider their preconceptions after seeing the production of Saint Joan at Quintessence Theatre Group. This play is entrancing and moving, and it moves along quickly. This is all due to the strong direction of Rebecca Wright and an incredible cast that keeps the show moving along at a fast pace that keeps the audience engaged. Quintessence Theatre’s production of Saint Joan is a passionate show with solid performances from the entire cast.

George Bernard Shaw published Saint Joan in 1924, four years after Joan of Arc’s canonization by the Roman Catholic Church.  Shaw put his own modern take on the story of Joan of Arc’s life in Saint Joan and the play examines the rise and fall of Joan of Arc. The play follows Joan as she hears the voices of angels and saints who instruct her to lead the French to victory over the invading English forces. In addition, she is divinely inspired to see that the Dauphin is crowned as the king of France. I was engrossed in the story of Saint Joan from the start of the play until the end. The play excelled at captivating the audience with this compelling story, and personally it provided me with a desire to know more about Joan of Arc’s life.

This production keeps the costumes and staging minimal, in order to place the emphasis where it belongs, on the story of Saint Joan.  Leigha 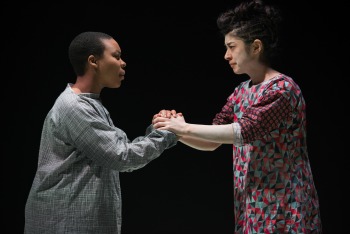 Kato portrays Saint Joan. Kato gives a strong and glowing performance. I cannot say enough good things about Kato’s performance, as she draws the audience’s attention every time she appears onstage. She is full of spirit and becomes empowered as the play progresses.  Andrew Betz portrays The Dauphin. Betz is animated in this role, and he capably shows how this character progresses from a child shunning his legacy to a mature and heroic king. John Basiullis plays the Archbishop of Rheims.  Basiullis gives a solid performance as the Archbishop, as he calmly and precisely delivers his wisdom. Gregory Isaac plays the Bishop of Beauvais, and he provides a commanding performance as he appears almost regal as he denounces Joan for the heresy of dressing as a man. I found the entire cast of this show to be strong as they tell the story of Joan. At the end of the play there is an intense scene that deals with Joan’s trial and the church officials that discuss her fate. This particular scene in which the officials deliberate about the nature of her heresy and how to deal with her crimes is not only powerful to watch, but the audience is drawn into the scene through the creative use of staging. Saint Joan at Quintessence Theatre Group is a spellbinding production that will pique your interest in the fascinating story of Joan of Arc. 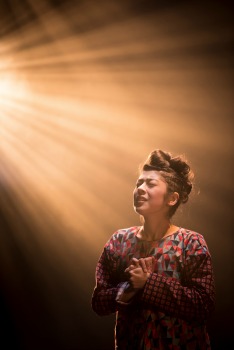 Saint Joan runs at Quintessence Theatre Group through April 22, 2016. For more information and tickets visit their website atwww.quintessencetheatre.org or call their box office at 215-987-4450.

Final Thought: Saint Joan at Quintessence Theatre Group is a riveting production about the life of Joan of Arc and her trial which ultimately led to her death. The cast of this production provide powerful performances as they captivate the audience with the complex story of Joan of Arc.