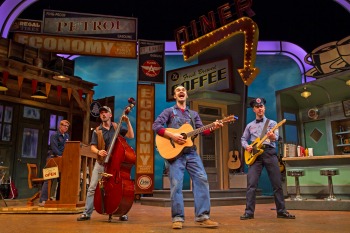 Sometimes a show that is purely entertaining with high-energy performances is exactly what we need to get away from our daily routines. That is exactly what Pump Boys and Dinettes does at Paper Mil Playhouse. This ninety minute show is complete with fantastic performances, great vocals and a set that is reminiscent of a diner and gas station from the mid-twentieth century. Audiences will tap their feet along with the music and be delighted by the outstanding performances from the cast.

Pump Boys and Dinettes is a revue show that takes place on the mythical Highway 57 somewhere between Frog Level and Smyrna. The book, lyrics, and music for Pump Boys and Dinettes are by John Foley, Mark Hardwick, Debra Monk, Cass Morgan, John Schimmel, and Jim Wann. The show is about a group of people, who work along the highway, some pump gas at a country gas station, the “pump boys”, and the others are waitresses at the Double Cupp Diner across the highway, “the dinettes.” There is a line in the show, “Work won’t kill you, but worry will,” and this single phrase states the laid back philosophy of the show. All the show asks is that people sit back, relax, and enjoy the evening of country-western songs. This show celebrates the people you will meet and life’s simple pleasures.

Under the direction of John Foley, this cast gives vibrant and lively performances. Since this show is a faced-paced production, and there was 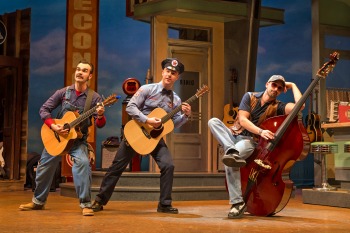 not one weak number, I will outline the highlights of the show. The cast as a whole shines, and they started the show strong with the song, “Highway 57.” James Barry (Jim) is incredible to watch as he plays the guitar throughout the show, and I thought his song, “Mamaw” was strong and emotional as he sings a heart moving song about his grandmother. Sam Weber (Eddie) has incredible bass skills that energize the audience, especially in “Taking it Slow.” Gabe Bowling (Jackson) gives an energetic performance in his song, “Mona.” Rounding out the Pump Boys is Jason Ostrowski (L.M.) who will impress audiences with his piano skills, and his song, “Serve Yourself” is strong.  Julie Foldesi (Prudie) and Alysha Umphress (Rhetta) make up the Dinettes, and they add pizzazz to the production. These two actors have powerful vocals throughout the show, and their song, “Sisters” is an incredibly well done and beautiful duet. The entire cast ignites onstage to provide a delightful night of music and entertainment.

In addition, the set of the diner and gas station, designed by Michael Schweikardt, is incredibly detailed. Brian Hemesath designed the colorful Dinette dresses and the pump boys’ gas station attendant outfits. Joann M. Hunter serves as the choreographer. F. Mitchell Dana is the Lighting Designer and Randy Hansen in the Sound Designer. Lastly, John Foley also serves as the Music Director as well as the director of the production.

Pump Boys and Dinettes runs at Paper Mill Playhouse through May 1, 2016. For more information and tickets visit their website at www.papermill.org or call the box office at 973-376-4343.

Final Thought: Pump Boys and Dinettes at Paper Mill Playhouse is a fast paced and light-hearted show that provides for a delightful evening of entertainment. The cast gives energetic performances, and the audience will tap their feet along with this show’s lively mix of country-western songs.

Kelli, I always love your reviews and your love of the arts