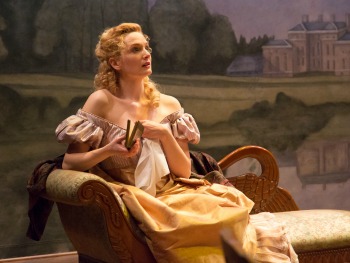 Seeing Jane Austen’s Pride & Prejudice on stage was a new experience for me. I have read the book and seen the movies, but seeing it live was something I have never experienced. I must admit that I am not an avid Jane Austin fan. However, after seeing People’s Light and Theatre Company’s performance of Pride & Prejudice I was delighted and the production made me an admirer of the story. After seeing this performance, I was sorry it had taken me so long to see this beloved novel performed on stage. This production has a stunning set, actors who made me fall in love with the characters all over again, and the show is beautifully choreographed.  People’s Light and Theatre Company (PLTC) have done a remarkable job in creating a setting and show that transport audiences back to the 19th century to experience the world of the Bennet family, and fans of Pride & Prejudice will not be disappointed by the remarkable production.

Last year celebrated the 200th anniversary of the publication of Pride & Prejudice that was originally published in 1813. This play, based on the Jane Austen novel, is about the prejudice that occurred between the classes in 19th century British society. The story was adapted for the stage by Joseph Hanreddy and J.R. Sullivan. The plot of the story focuses on the Bennet family, a bourgeois family, who have five unmarried daughters and the mother is desperate to see them all married. The story revolves around Elizabeth Bennet the second oldest daughter, and her relationship with Mr. Darcy. The show is full of all the romance one would expect of Pride & Prejudice, but it is also infused with humor, dancing and remarkable staging that makes exceptional use of the space at PLTC.

I need to applaud Samantha Bellomo who serves as both the director and choreographer. Bellomo staged this beautiful production, and her 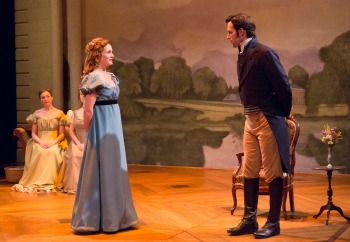 creative use of dancing throughout the show to help demonstrate the dancing rituals of the time, as well as to assist the audience in recognizing scene transitions is to be applauded. The incorporation of Regency dance was stunning. Another bright light of this show is the stellar cast who kept me engaged and emotionally invested throughout the entire production. Playing the role of Elizabeth Bennet is Julianna Zinkel. Zinkel captures Elizabeth’s intelligence and independence remarkably well. Playing Mr. Darcy is Marc LeVasseur who evokes Darcy’s coldness in the beginning of the play, and evolves into a charming character. Zinkel and LeVasseur have deep chemistry onstage, which captures the essence of the relationship between Elizabeth and Mr. Darcy.  Jessica Bedford portrays Jane Bennet, the oldest of the Bennet daughters. Bedford’s performance is full of elegance and grace as she illustrates Jane’s reserved emotion. Jerry Richardson plays the wealthy Mr. Bingley. Richardson is captivating in this role and he brings energy to this character. Tom Teti and Marcia Saunders portray the parents, Mr. and Mrs. Bingley.  Both these actors add humor to the play, and are very engaging throughout the show. Playing the role of Mr. Collins, the young insufferable reverend who wants to marry Elizabeth, is Robert DePonte. DePonte is enjoyable in this part and adds comedic relief during the play. The entire cast is engaging and do a wonderful job bringing the characters from the classic novel Pride & Prejudice to life.

Pride & Prejudice runs at People’s Light and Theatre Company through March 30, 2014. For more information and tickets, please visit their website at www.peopleslight.org or call their box office at 610-644-3500.

Final Thought: Pride & Prejudice is a spectacular show; it has a beautiful set, a stellar cast, and wonderful choreography.  People’s Light and Theatre Company has produced an engaging show, that will make audiences fall in love with Pride & Prejudice all over again.