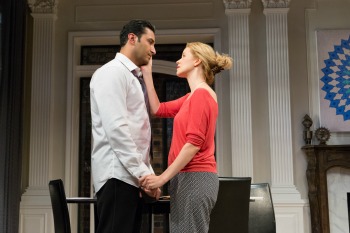 Disgraced at Philadelphia Theatre Company is a show that I would categorize as a thought-provoking drama that people need to discuss after they see the show. Personally, I found this show affecting, and it provided a good deal to think about and contemplate long after the show was over. The play asks difficult questions in regards to religion, individualism and assimilation. Disgraced at Philadelphia Theatre Company, under the direction of Mary B. Robinson is a powerful production with strong and effective performances, and it is a show that will stimulate conversations.

Disgraced is a play by Ayad Akhtar that premiered in 2012. The show premiered in Chicago and eventually opened on Broadway in 2014. It also won the Pulitzer Prize for Drama in 2013. Disgraced revolves around a young lawyer, Amir, and his wife, Emily who is an artist. Both Amir and Emily are successful in their careers. Amir is a conflicted character in that he was raised in a strict Muslim household, however, he chose to leave this doctrine behind as he has attempted to assimilate into mainstream American society. In his quest to assimilate he choose to change his last name in order to not call his Pakistani roots into question. Among a number of other factors, this act eventually plays into his struggles and eventual downfall. The major confrontation and emotional climax of this play comes forth at a dinner party to which Amir and Emily invite their friends Isaac, an art dealer, and his wife, Jory, who is Amir’s co-worker. What ensues is an evening of raging 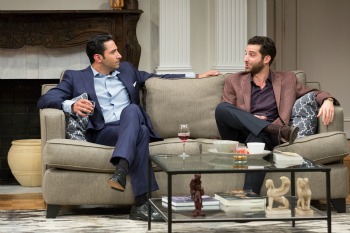 tempers and heated conversations about politics, race and religion. The play contains constant surprising plot twists, distressing situations, and dialog that is smartly written and somewhat shocking. Disgraced is not a light or comforting play, it confronts the audience with topics that force them to reconsider how we view the world and engage with those around us who may be of a different race, religion or hold a differing ideology. It is a show I would advise to see with others and then discuss afterwards.

Playing the role of Amir is Pej Vahdat. Vahdat infuses this role with passion. Amir is affected by the world he lives in, and the frustration he feels comes through in Vahdat’s performance.  Playing Emily, Amir’s wife, is Monette Magrath. Magrath and Vahdat have a strong chemistry onstage, and she persuasively plays a woman whose world view may be seen as naïve. Anthony Mustafa Adair portrays Amir’s nephew, Abe, who struggles with his own identity as a Muslim and an American. Adair has moments when he is quiet and compassionate, but he brings out Abe’s irritation due to circumstances he feels are unjust. Ben Graney plays Isaac, the art dealer who is interested in Emily’s work. Graney adds humor at a number of points throughout the play, although there is a moment in the dinner scene, in which he expertly embodies the shock that the audience feels after a 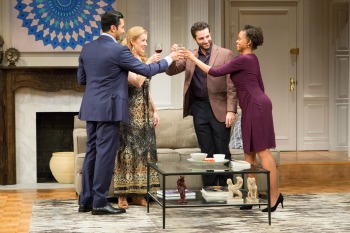 particularly heated exchange of dialog. It is a powerful moment. Rounding out this cast is Aimé Donna Kelly who portrays Jory, Isaac’s wife and a lawyer at Amir’s firm. Kelli and Graney have great chemistry onstage, and wonderfully biting banter. In addition, Kelly radiates vitality and intensity in this role.

Disgraced runs at the Philadelphia Theatre Company through November 8, 2015. For more information and tickets visit their website at www.PhiladelphiaTheatreCompany.org or call their box office at 215-985-0420.

Final Thought: Disgraced is an exceptional show that will make audiences think and contemplate the characters and themes in the production. The show has a remarkably talented cast, and an intelligently written script.