When I learned that People’s Light and Theatre Company was doing Woody Sez this year, I had no idea what this show would be like. According to a press release, Woody Sez is “a biographical music review that utilizes the famous folk-singer’s own words, writings and songs to present a retelling of Guthrie’s inspirational life and share why Guthrie’s experiences and activism are still relevant today.” This show is a celebration of Woody Guthrie and his music, and the performers in Woody Sez are having just as much fun as the audience.  Woody Sez is a pleasant show that is sure to have audiences tapping their feet along with the music.

Woody Sez is a show about Guthrie and his songs, devised by David M. Lutken with Nick Corley and Darcie Deaville as well as Helen J. Russell and Andy Teirstein. Nick Corley directs the show, and Woody Sez premiered at the Edinburgh Festival in Scotland and traveled all over from London to Washington D.C. Woody Sez skillfully tells the story of Guthrie through song, and the show reminds all of us how Guthrie awakened the interest in folk music, and inspired musicians such as Bob Dylan and Bruce Springsteen.

One of the things this show does well is show audiences what an inspiration Guthrie was to many people. The four people on stage have a deep 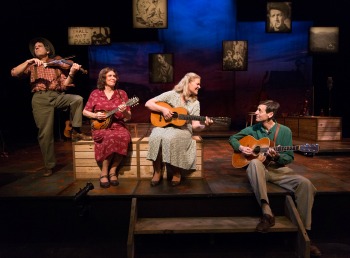 passion for Guthrie’s story, and every hardship and success he had comes through in their telling the story of his life and celebrating his music. Woody Sez is complete with well-known Guthrie songs such as “This Train is Bound for Glory,” “So Long, It’s Been Good to Know Yuh” and “This Land is Your Land.” The whole cast gives strong performances throughout the production. David M. Lutken is the person who does most of the narrative throughout the show, and he is a very good storyteller. He peaks the audiences’ interest about the history of Guthrie as he explains the hardships Guthrie and many others who lived during his time endured. The rest of the cast are equally as strong conveying the stories of Woody Guthrie through song, and some of the songs are very emotional. A few highlights of the show are: “Jackhammer John,” “Curly Headed Baby,” “Jolly Banker,” “I Ain’t Got No Home” and “The Ballad of Tom Joad.” This show really brought out the spirit of Woody Guthrie, and anyone who has an interest in Guthrie and his music should not miss Woody Sez.

Woody Sez  runs at People’s Light & Theatre Company through May 25, 2014. For more information and tickets visit their website at www.peopleslight.org or call their box office at 610-644-3500

Final Thought: Woody Sez is a show that reminds us all of the importance of Woody Guthrie and his music. This cast brings out the spirit of Guthrie as they tell his story and perform his music.

This sounds like lots of fun . Woody Guthrie was a great influence on American culture...I have always enjoyed the spirit of his music...as well as the music of his son , Arlo....I don't want a pickle , just wanna ride my motorcycle