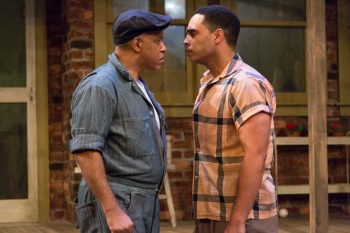 People’s Light & Theatre Company opens their 40th anniversary season with August Wilson’s Fences. This play tells the story of a man, Troy Maxson, and the trials and tribulations of his family. The show focuses on the struggles of Troy’s family, in particular the conflict between Troy and his sons. Fences is a show that addresses the struggles of the Maxson family, as it delves into the challenges of family and marriage. Director, Kamilah Forbes, assembled this amazing cast and they tell the complex story of the Maxson family with grace.

August Wilson wrote Fences in 1983. This play is sixth in the ten-part Pittsburgh Cycle. Nine plays in this series of plays take part in the Hill District, which is primarily an African-American neighborhood. Fences takes place in the 1950s, and it explores the African-American experience in this period. This play won the 1987 Pulitzer Prize for Drama and the 1987 Tony Award for Best Play.

Even though this play is among many plays in a series, you do not need to have seen any other play from the series to understand and enjoy this one. The production at People’s Light is the first time I have seen any play in the Pittsburgh Cycle. This is one of the more moving and emotional plays I have encountered this year, and the entire cast and crew do an incredible job with Fences. In the role of Troy, a father and husband who struggles to provide for his family and enjoys telling stories of his past glory days as a great baseball player in his younger years, is Michael Genet. Genet has the difficult task of playing this complicated character; he has to be believable and give a raw and real performance every night. I was impressed by Genet’s performance from the beginning to the end of the show; he is engaging and animated, and I am still thinking about this complex character days after I saw the production. Melanye Finister plays Rose, Troy’s wife. Rose is a strong woman who keeps positive and she does everything in her power to hold her family together. Finister is incredibly strong in this role, and she gives a remarkable performance especially in Act Two where she and Troy are in an emotional and heated argument. This scene is one of the best in the entire production. Playing the role of Jim Bono is Brian Anthony Wilson. Bono is the moral compass of the production and he tries to find the joy in his life. He tries to live by what he thinks is right and believes he learned this from his friendship with Troy. Every time I see Wilson onstage he has a presence and energy that illuminates the stage, and this role is no exception. Playing the role of Lyons, Troy’s son from a previous marriage is Wendell Franklin. Franklin elegantly brings to life this inscrutable character who is  trying not to turn out just like his father. Ruffin Prentiss plays Cory, the son of Troy and Rose, who is desperate to be loved and praised by his father. Cory is a character that wants to make more of himself than his father did, but Troy takes this as an assault on his character. Prentiss smartly portrays this complex character that evolves from an athletic teen wanting his father’s affections to a strong man looking to put his past to rest. Genet and Prentiss have a strong chemistry onstage, which makes the scenes between these complex characters all the more engaging. G. Alvarex Reid plays Gabriel, Troy’s younger brother whose war injuries caused him psychological damage. Gabriel is a good-hearted character, and Reid has the ability to fill the stage with Gabriel’s emotions. Rounding out the wonderful cast is Cameron Hicks as Raynell. Hicks brings a lightness to the show with her cheery presence.

I also need to mention the artistic team for Fences. James F. Pyne Jr. designed the incredible set. Michael Krass is the Costume Designer, Lighting Design was done by Traci Klainer Polimeno, and Kevin DeYoe is the Sound Designer. Additionally, Amatus Karim Ali is the Composer.

Fences runs at People’s Light & Theatre Company through October 5, 2014. For more information and tickets visit their website at www.peopleslight.org or call their box office at 610-644-3500.

Final Thought:  Fences takes the audience on a complex and emotional journey through the lives of a complex family; after this experience, it is hard to leave People’s Light & Theatre Company without being deeply moved.