People's Light Presents an Intriguing THE HARASSMENT OF IRIS MALLOY

The current show onstage at People's Light is the world premiere of a new play, The Harassment of Iris Malloy. This play is a political drama, written by Producing Director of People's Light, Zak Berkman. It tells the story of one woman, Iris Malloy, and what happens when she has a chance encounter with a United States Senator. The Harassment of Iris Malloy, under the direction of Lisa Rothe, is thought provoking, emotionally driven and has an incredible cast who portray an intriguing group of complicated characters.

When I left People's Light after seeing The Harassment of Iris Malloy I had a lot to consider about the show I just experienced. This play is about a woman, Iris Malloy, who is a single mother, has two children and does everything she can to support her children. However, she is exhausted and tired of living in a world of disappointment. One evening as she is waitressing for an event held in honor of Senator Aarons, he notices her among the audience and has one of his men request that she meet the Senator in his hotel room. What ensues is a night of honest conversation and mystery.

Julianna Zinkel plays Iris Malloy. Zinkel is an actor who provides a great deal of depth and emotion to her character. In Zinkel's portrayal of Iris audiences can see Iris’s story come through in her body language. Before audiences learned Iris's backstory they knew she lived a life of frustration, unhappiness and exhaustion. When Zinkel utters the line, "I live in a world of disappearing men," it pulls at the emotion of this story. Iris is the emotional center of this play and Zinkel does an excellent job telling this woman's tale. Scott Bryce portrays Senator Aarons, and he is 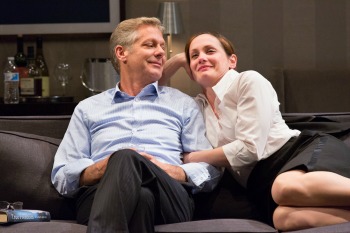 perfectly cast as a man who is a senator, but who also seems to put his needs before anyone else. Bryce is likable in this role, which adds to the complexity of his character. The chemistry between Zinkel and Bryce was good. Playing Iris's sister, Cydney, is Teri Lamm. Cydney is a character who seems to have a better grasp on her life than her sister. Lamm and Zinkel have a good sisterly dynamic, and the emotional explosion towards the end of the play is well done and gripping. Rounding out this cast is Pete Pryor who plays a few characters throughout the show. His performance as Sticker, a man who is only interested in making use of the situation to make money, is excellent. Pryor's animation and exuberance in this role brings forth one of the themes in the play that people will do just about anything to get ahead in this world without regard to truth or how it will affect anyone else.

One of the great things about The Harassment of Iris Malloy is that it is a new work, and it is a show that will spark discussion. In general, I am always glad to see new works being produced in the Philadelphia area. My criticism with this show is that there was not enough character development between Iris and Cydney. I felt their complicated relationship and backstory was not explained thoroughly enough throughout the show. That being said, this cast does an excellent job exploring the social issues that are important to the national conversation of what it means to be successful, and the personal and social costs people are willing to pay to be a success in a society that views winning as everything.

The Harassment of Iris Malloy runs at People's light through July 10, 2016. For more information and tickets visit their website at peopleslight.org or call their box office at 610-644-3500.

Final Thought: The Harassment of Iris Malloy is a thought provoking play that will have people talking about what they just experienced on the drive home. The cast is magnificent in the way in which they tell the stories of these complicated characters.